Okay, so having gotten in 4 games with the 500 point list and then playing the big game I realized quickly what the list didn't have which was any kind of combat potential.  Ryans Ogres on the other hand accelled at combat while I was left completely dependant on my shooting.  This month I'm going to change it up.  Knowing that my end list for Adepticon will have at least 4 big blocks in it I know that I can solidly work in that direction and that is exactly the way I went for this month.  The army list as a whole will now compries:

I've chosen to get rid of the Weapons Team as it really seemed quite useless.  I mean a 5+ to wound anything is nice and all, but for 65 points, I mean that's half the cost of the Giant Rat unit so I decided just to build the Giant Rats.  4 blocks should give me a definate number advantage.  Hopefully I can stick a unit in and hold there necessary round to get another in the flank and give me the static win since the Skaven aren't exactly going to kill a lot.  The Plague Monks though are a definite hitting unit as long as my dice don't abandoned me.  The picture of the whole army together at this point. 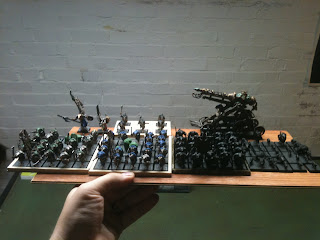 You can see right away the addition to the army for this month as its all simply primed black.  The BSB is on the left, a very simple work from the IoB set.  I'm really stoked to get to work on this and get going.  A total addition of 75 models from 500 to 1000 points.  Hooray for cheap Skaven!
Posted by Joe Flesch at 11:57 AM