Got together to play Ryan's Ogres today.  After the severe beating I took from Chucks I was needless to say worried.  Of course there was some seriously bad luck against Chuck when the Genera/Engineer blew up on the top of Turn 1 taking 1/3 of his unit with him.  Still, trepidations to say the least. 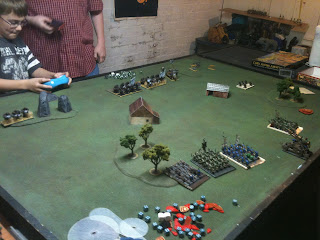 Here we can see the initial deployment.  From left to right he Skaven are: Giant Rats, Plague Monks, Clanrats with BSB, WLC, Clanrats with Engineer, Gutter Runners way out in the middle.  On the opposite side from left to right: Leadbelchers, Ogres, Ogres with Bruiser, Scraplauncher, 2 single Sabretusks.  I won the option to go first and did so hoping to get an early jump off with the WLC. 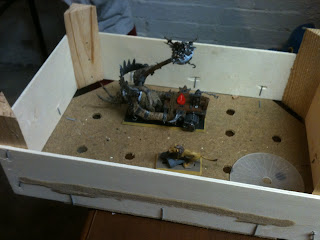 That early jump off with the WLC didn't work out so well.  Misfire and 1.  Yup, top of turn 1 and I'm 90 points in the hole.  On the other hand the top of Ryans turn 1 he charged my Gutter Runners with 1 of his Sabretusks.  I killed it with a stand and shoot causing a panic check in the Scraplauncher which went right off the board.  A good laugh was had by both of us. 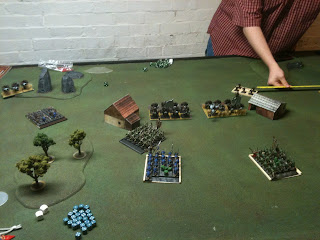 Here's a solid view of about the middle of Turn 3.  You can see things getting ready to really begin as far as combats are concerned.  The units are linine up nicely and such.  The charge being measured here is a Sabretusk intot he flank of the Gutter Runners.  I had faith they would kill him in hand to hand.  Which they did. 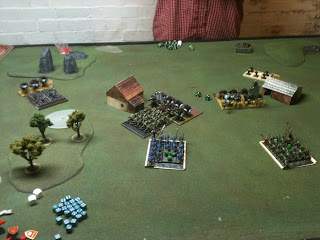 The first combat engages.  I was really hoping for better performance form the Monks.  They lack the hitting strength that they require.  Everytime I've used them with the Plague Banner they end up with 20ish hits, but only ever manage about 4 wounds.  They ended up losing almost 15 guys, and barely held.  Ryans other unit should have hit the other unit of Rats but managed to fail the charge which was good for me. 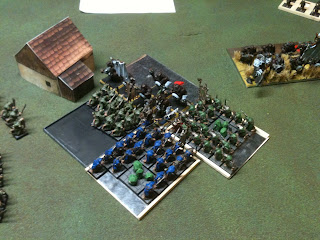 Now you see why it was good for me.  Big charge.  The green Clanrats even got Death Frenzied.  We won this combat and ran down the Ogres.  It left me all messed up and turned out to be a bummer of a deal.  I should have reformed my Monks but didn't which lead to the Blue units eventual demise as the Leadbelchers currently not in this picture hit them in the flank. 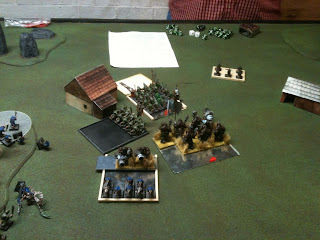 The end result from that mistake of not reforming the Monks.  Luckily the Leadbelchers rolled a terrible pursuit and the Ogres had chosen to hold and reform.  Lucky me, the Blue unit survives for a while after this being a hinderance to Ryan.  My green unit ended up walking into the house for a few turns after this to hide from the big bad Ogre unit who eventually finished off the Monks. 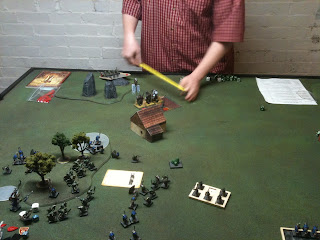 The end of the game.  His Leadbelchers finished off the blue unit.  The Gutter Runners finished the Leadbelcher.  The big Ogre's killed most of the green unit and made them run.  I got lucky and at the bottom of turn 6 Ryan declared the charge.  I manged to stay literally just on the table and he didn't catch me thus preserving me enough points to call the game a draw.  About 623.5 to 692 in Ryan's favor.

This game was crazy with some seriously big swings that neither of us could believe.  His dice would be terrible or my dice would be hot.  It was a fun game with a lot of back and forth.  I feel like I need more shooting of some brand.  You'll be seeing the re-introduction of Weapons Teams in my next list for sure.   I just feel I don't have the hitting power to deal with so many Ogres and need to kill more before the actual combats.  Of course if the WLC didn't blow up turn 1 that may have been a little different, but who knows.  Also my magic this game didn't do much.  I didn't mention in the report anywhere that I had Cracks Call but I think it only ever killed 3 Ogres.  I'm really torn on what to add next month.  We'll just have to wait and see.
Posted by Joe Flesch at 7:59 PM

Wish i could have seen this one!