So for our November 1,000 point 3-way game we got together and decided we would give good ole GW ingenuity a try.  We played the 3 player scenario provided in the back of the full sized big red book.  It turned out to be our mistake.  See I never claimed to be a superb scenario writer, but after a number of issues trying to write our 1st 3-way scenario I thought we'd give this a shot and we found it to be even more unbalanced and messed up than the 1st.  So alas, here sits the battle report, and the hope that we'll soon have a 4th person so that in the large games we can do teams. 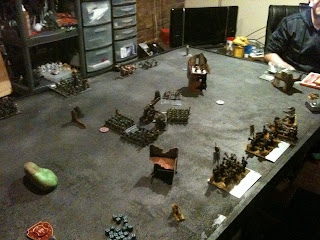 The game begins with me literally being forced to set up my entire army in the middle of teh table.  Ryan's Ogres sit on the right while Dave's Beastmen are on the left.  There are 3 poker chips on the table, two in plain view and one behind the far tower in the picture.  These represent objective points.  I get to go first for all it mattered and as this scenario specifically breaks the common turn order it messed up a lot of things. 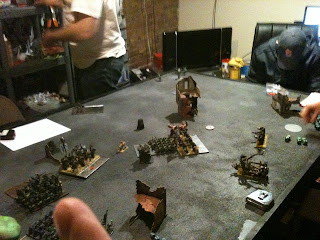 The picture doesn't show it but the two Clanrat units that were in the center had been killed a turn earlier.  Being started in the center and only 10" away from enemies meant big 1st turn charges for the Ogres.  All sorts of in his favor.  Dave lost a whole unit of Gor to a panic test caused my WLC which also in this picture has been killed.  It was only I think turn 2 at this point.  It was bad. 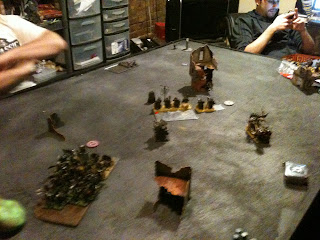 Here we can see that the combat above has ended.  The Plague Monks we're ran down.  The Minotaur are dead and my Giant Rats are moving off towards the far board edge.  Dave is having no better luck dealing with the long moving Ogres and their many attacks as here we see his Bestigor getting beat on by a unit of Ogres that had yet to lose a single man. 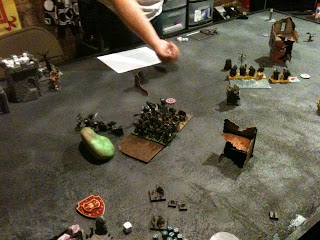 Dave did manage to hold for a round.  Not that it was to last much longer than that.  At this point Ryan controlled 2 of the 3 Objective Points as well as having earned a 3rd for killing my General. The Bestigor lost this time and ran, they managed to get lucky and avoid being ran down just to get force fled off the table before having a chance to rally. 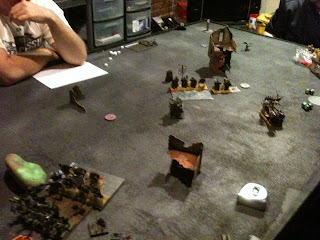 Here we see the final play.  Dave's Bestigor running and literally the only models I had left were those Giant Rats and a Gutter Runner in that far tower.  Ryan completely dominated this game.  Me getting sandwhiched early on put me in a horrible spot.  Ryan getting the 1st turn charge left me out to dry.


So, as you can tell from the comments the game was pretty bad.  The scenario that GW wrote in the book seemed interesting and it was definitely that.  Unfortunately it was not nearly awesome enough to ever warrant playing again.  Starting in December I'll be writing our Scenario's again.  I'm not 100% certain how I'll do it but I'm going to have to come up with something.  Ogres are super hard to slow down without at least 1 turn of shooting and magic to do some early damage and 1st turn charges ruin games...  It's rough to say the least.
Posted by Joe Flesch at 9:17 PM

this sounds like a mess of a scenario, I am grateful that ryan had a jump on you 2, rats and beasts are so broken anyway :)