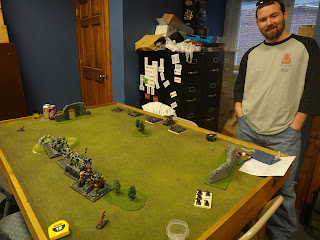 Well Joe and I played in the back at Gryfalia's Aerie at our November tournament.  Initially things looked like they could either way.  He had a level 2, a multi-wound cannon and poisoning scouts on my flank.  It would come down to dice and leadership checks to determine if I could get to him.  This is our turn 1 and deployment pic! 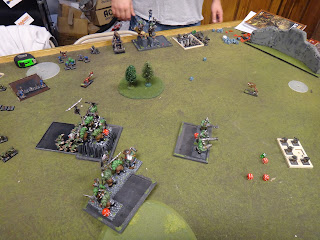 By turn 2 both of our heavier flanks had come around.  My Mournfangs into his Clanrats and his Giant Rats into my Bruiser/+HW ogres.  I kept my Leadbelchers out taking pot shots here and there but didn't commit with them on the plague monks (Without realizing he had the Plague Banner in them).

By turn 4 the rats had run away, the Clanrats had failed checks and ran after 2 rounds of combat with the Mournfangs and the Ogres with Ironfists kept up with Plague Monks.  They did put some wounds on the ogres after a round or two.  Joe actually hit all 20 time with the Monks the first round from the standard.  I made 4/9 saves with my 5+/6+ saves.  Turn 4 my Sabretusk charged in and killed the WLC, and the Leadbelchers charging and afterwards running away the Bruiser's unit of Bulls then went in and cleaned up.


I like my list so far it has gone 3/0 versus Skaven, Empire, and Wood Elves.  Changes for December...  I will probly increase the Leadbelchers to 4 with a Musician and take another Sabretusk.  I am on the fence with regards to another Mage/BSB or Ironguts, though I probably could go cheap and take a unit and the characters.
-----------------------
Joe's Part:
Chuck is quite correct.  The game started out as normally as any and if you'd seen the first batch of rolls from me you'd have thought immediately, "Ooh, here comes Skaven badness".  However, that badness came in the form of a turn 1 implosion from my Engineer killing himself and half of his unit to immediately remove my magical ability from the game.  This would hurt my army pretty significantly anyway.  Even more so though that Ogres have so many wounds to get through before they begin losing attacks.  At the low points I really depend on the magic to do some killing for me and here it was gone before it had done anything at all.  The WLC never got a good hit only occasionally clipping and at low Strength.  The Gutter Runners did okay, even forcing the Leadbelchers to flee from a Stand and Shoot reaction when they tried to Charge.  The Mournfangs are super powerful, but I was really amazed at how long it took them to clear out 25 Clanrats.  I believe it was 3 rounds of combat and that is somewhat because of dice, but I think that it is also very much the Steadfast ability at its best.  The game was good, I think with magic having not crapped out on me it may have been a better/closer game but c'est la vie and what not.
Posted by Cpjiardina at 2:01 PM