Thanks for joining us again for Episode #83.  I'm joined in this episode by friend of the show Chuck  to finally sit down and talk more in depth about Warhammer: Age of Sigmar!  I must say its really nice to sit down for a full length show with an old friend and discuss the new game.  Chuck and I break into this show going through the 4 pager of rules and giving our thoughts and opinions on it as we go over those rules talking about how to play the game.

We wrap up the show discussing what we've done lately and kind of where we are at personally in the hobby right now.  We also mention the future of the show which we're not 100% on the direction of at this moment but I can certainly assure you we'll be working diligently on continuing everything as it is to the end of 2015 at which point I think we'll have had more than enough time to decide on exactly what the future of the hobby will be for ourselves and consequently the show itself.

Thanks for joining us and as always if you have any questions, comments, etc... please let us know by e-mailing us at: waaagh.cast.jf@gmail.com

Posted by Joe Flesch at 9:10 PM No comments:

Episode #82: Opinion on Age of Sigmar 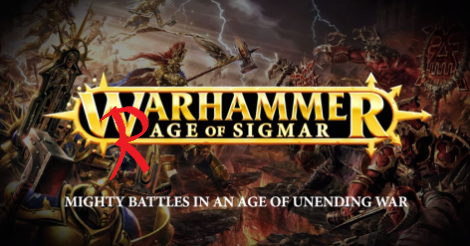 
Episode #82 is not only here, it is short.  I basically just wanted to get something out after a two month hiatus and get some talk in about Age of Sigmar and where I stand on the hobby at the moment.  To me it isn't dead and I'm actually hoping this will reinvigorate me into my podcasting.  So its only abot 25 minutes that I recorded on my lunch at work today, listen to it and I hope maybe you get something from it.  I used my mobile recorder for this episode too, so the quality is kind of rough.  Sorry about that ahead of time.

Holy hell the world has officially ended.  I mean, I know that the WHFB world technically ended when the last End Times book came out but wow does it seem like it has ended now.  Yet, reborn it is as “The Age of SIgmar” heralds in a new era of peace and prosperity.  Well, not really…  Wow was the internet a crazy thing to check out over the last two weeks as not only more and more rumors, pictures and theories flooded but as the rules were eventually released.  The amount of blind hate spewed from people who play and love Warhammer was unreal.  It literally hurt me a little inside seeing the community fracture like it has which is really quite unfortunate as that will probably be the worst thing to come out of Age of Sigmar while some would argue that the worst thing is Age of Sigmar itself.

I’ve now played two games of Age of Sigmar (AoS) and while I have begun to form many opinions, each time I play something a changes a little bit.  Here and there I see pieces of strategy and planning come into it.  Then it will do a 180 on me and I’ll simply be left wondering what on earth GW was thinking.  I get the need for a reset, I really do.  WHFB was a flagging game system.  It wasn’t pulling its weight and that has a lot to do with many customers including myself.  Many of us who have been in the hobby for years own so many armies that we don’t buy a lot of new stuff.  Those of us who do keep building armies tend to go and find it second hand, often as not.  Personally I do a little of both new and used.  When kids (I know people are railing against this whole kid’s thing right now) come into the store they see WHFB and 40K and think they both look amazing.  The whole barrier to entry through money thing exists in both systems although I do agree that 40K is probably slightly less.  Something had to be done to get people to walk in, see this and say “I must play that!”.  Now whether Age of Sigmar achieves this goal or not will remain to be seen but GW has gone a long way towards giving it the college try.