Okay, so here we go again with a battle report. Month two; we are at 1000 points, and I am battling Dave and his Beastmen army. 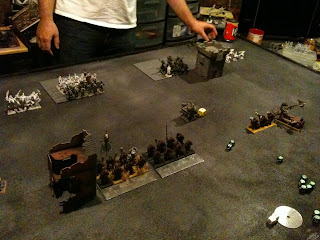 We played a normal battle line scenario, and my list contained: 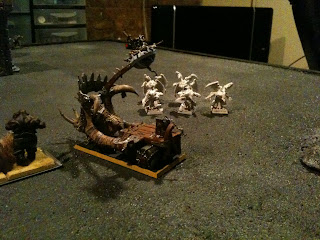 I don't remember exactly what Dave had, but it pretty similar to the one he battled Joe with except he swapped out a Bray Shaman for a Wargor. It started off with me getting first turn, and marching straight ahead at him. Did some shooting, missed with Scraplauncher, and minimal wounds from LB's. His turn was moving forward, most things straight forward, but did put Harpies to the side of the Scraplauncher, and hid one of his casters in the tower. In Magic, he cast the buffed Amber Spear at Scraplauncher and did 3 wounds. 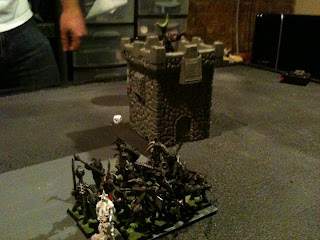 Turn two was again uneventful for me. Just repositioned my troops, scraplauncher again missed, and LB's killed 2-3 bestigors. His turn 2 he charged both the Bestigors and Harpies into the LB's, and move the rest of his stuff forward. Again a buffed Amber Spear hit the Scraplauncher, but only did 1 wound leaving it with one left. Bestigors and Harpies destroyed the LB's and chased them down.

Turn 3, I charged my 7 Ogres w/ Bruiser into his Minotaurs and my 8 Ogres into his Bestigors. Shooting did much better for me as I hit a pile of scrap on top of his wizard in the tower and killing blowed him. Both units of Ogres were successful and broke both his Mino's and Bestigors. The Bestigor breaking caused the Harpies to panic, but my Ogres by the Mino's only managed to roll a 3 for pursuit and were left out to dry for a flank charge by Dave's Gors. He then charged my Ogres in the flank on his turn with his Gors. He caused my unit to break, but failed to run them down. He also failed to rally with both the 1 remaining Mino, and his Harpies, and the Harpies ran off the table edge. 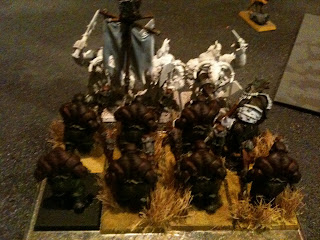 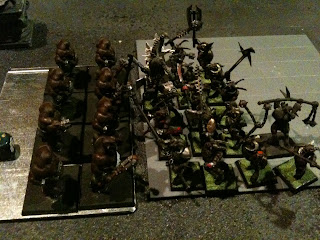 Turn 4 I had no charges so I just rallied and repositioned my remaing units. Scraplauncher killed 3-4 Gors and then on his turn he charged the Gors back into my Ogres. This time he rolled snake eyes for his primal fury and became frenzy as well. Again he broke my Ogres and this time managed to run them down. 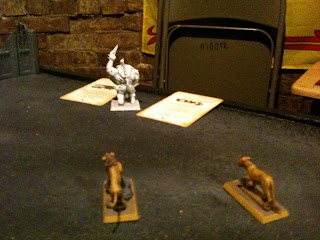 Turn 5 I took my 2 Sabertusks into his last Mino to try and gather the rest of those points. I managed to do 2 wounds, but then he killed one of my Sabers. His turn he repositioned his troops and then got off a Wyssan's on his Mino making him toughness 5. He then killed off the remaing Sabertusk and his Mino survived the battle.

Turn 6 was really uneventful, as we were both out of range to get back in combat with each other so the game ended. Overall it was a draw with him getting 703 vitory point, and myself getting 606. Very good game, and could have easily went either way. Had he just gotten that extra wound on the Scraplauncher, or had I got the final wound on his Minotaur it would have been a win for either of us.  Great game, great time.