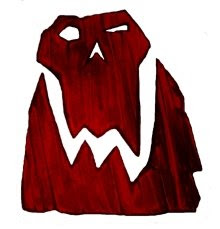 For those unaware John from The Unstable Dice podcast is hosting a small hobby project/tournament that a bunch of people are participating in.  As a purpose to push listeners and traffic to his show we are posting our blog entries over on his website first which you can link to from here; but also after a week I will be posting my entries on my own webspace as well.  To that end here below is my first entry.

We’ll kick off my first article with a short introduction.  My name is Joe Flesch, some of you may know me from the Podcast/Blog, The Waaagh Cast!  I don't want to go into a super long story about my hobby past or credentials but I thought I’d cover some basics.  I've been playing GW games for 16+ years and while most of it was casual I've been heavily involved for the last 7 or 8 in just Warhammer Fantasy.  I hosted a Fantasy Podcast for 3 years and have just restarted it after a 1 year hiatus.  I’m pretty excited to be participating in this little project of Johns and hopefully you readers enjoy the articles that we’ll all be putting out.

Like most hobbyists I get pretty excited about projects like this.  The point of Regiments of Renown was to play very small, simple and quick games of Warhammer during short periods of time and to really be able to give your force a feeling of being unique and special.  You’re essentially building a small Regiment from the old Dogs of War days, but with your own fluff and model ideas.  To most of us it’s pretty exciting stuff.

Turns out I would be completely remiss to not have already mentioned this, but last Friday May 31st Warhammer Quest was released for IOS devices such as the iPad and iPhones from Apple.  The game was produced by Rodeo Games from the UK and is a pretty awesome implementation of the original Games Workshop game.  It isn’t 100% convert though and it’s worth noting.

The primary losses from the old game to this computerized version of it are small bits like the lantern, the alehouse, some spells and skills and other pieces.  Still what they did transfer is absolutely the core of the game and that’s the important part.  They’ve also updated the characters, names and model representations to the current day models and background which means you no longer have an Elf but you have a Waywatcher.  Instead of a generic Dwarf you get an Ironbreaker and no longer is the Barbarian himself, but a Marauder instead.

Now I don’t feel that a review of Warhammer Quest is worthwhile frankly.  It’s a dungeon crawler game where you run through dungeons constantly killing monsters and collecting loot while leveling your characters up.  Very addictive game.  The graphics are very good and the gameplay is smooth and solid.  That isn’t to say there aren’t bugs in the game because there are, but they are certainly few and far enough to ignore. So I have some apologies to make about the website and the show to everybody.  It is pretty clear when you look at the posts and the previous release that I had stated I'd be dropping a show once a month; and our last show was released on I think the 29th of April.  Since then; I've been pretty silent on all fronts except for a couple of posts about Adepticon 2013.

Well, there are some reasons behind the silence.
So these are the reasons.  Acceptable or not; I will be working diligently to get an episode recorded and out by the end of June.  My wife actually has back surgery scheduled for the 17th right now; so again we may see this lag up.  Hopefully though I'll be able to work something out with Ryan and get you guys something to listen to before the end of June.

I just wanted to apologize for not having things up to the speed that they should be.  Plan to hear from me more in the future and thanks for sticking with us.