Month two is here, and we have now increased to 1000 points. My army did extremely well at 500 just because of the brute force of it. Nothing that Joe and Dave had could stop my main block of Ogres if it got into combat with them. So for this month, I kept the same strategy, and we'll see if it will pay off. 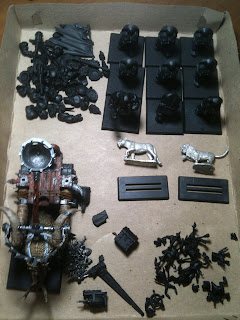 I chose to still only have one hero, because I think the troops are going to be more important at low points. I really do miss magic and a BSB though, and think they will be coming out to play rather soon. The Ogre blocks will again try to close the gap quickly and get into combat asap. Leadbelchers are just amazing, and in my opinion so far, should be in every Ogre Kingdoms army. I really like the Scraplauncher model, but have not really had a chance to use it, so that will be interesting considering I have a lot of toughness three targets in both Joe and Dave's amries. As you can see in the pictue, I am not using the normal GW Sabertusk models, and have decided to use some lion models I found through Crocodile Games as substitutes. They fit very nicely into my African theme, and I severely dislike the GW models. The lions are a bit smaller than I had hoped for, but when comparing them to GW horses, then are to scale to what a lion should be to a horse so I am happy.
I am almost done with the launcher already, then I will get started on the sabers. I am still enjoying painting this army, and I hope I continue to enjoy playing it. I have over doubled the model count this month which was to be expected. For these first few months, I am trying to include units that I feel I will use in the army 99% of the time so it might not make for the best build right now, but it should pay off in the end.

Thanks,
Ryang19
www.ryanshouseofblogs.blogspot.com
Posted by Ryang19 at 7:34 PM