So I'm back, and quite recently after the previous post to look at some of the models.  Now that all of our stuff has come in we can discuss a little bit of the size and quality that we found in the 2 Player Starter Box (Outlaws VS. Lawmen).  The models that are plastic are highly detailed and very nice.  There are definite mold lines on them which you get with plastic tooling, but GW has learned how to hide them quite well.  I actually don't think that’s quite as possible with the WWX models as they come in so many pieces.  Where most GW models are 5/6 pieces a model for WWX is closer to 10 in some cases.  This I believe probably aids in the higher detail of the models but also make the mold lines that are there almost impossible to hide.

Going through the rest of the box we have the mini rulebook which is very nice for what it is.  It lacks the background of the game but has a short blurb on each of the original factions in the game.  It also only contains the 3 tournament style scenarios and not the 10 narrative scenarios in the larger book.  The box set also came with a single set of templates which are nice with raised edges, numbers and hard plastic.  It came with 4 D10 dice which are nice enough for dice but I think they really could've came with more; 4 seems like a minimum, especially considering one of the models has the ability to fire 6 times per action.  Finally it came with a counter set to mark statuses and activations of models on the board which comparative to the rest of the box seemed very cheaply made and was the only really disappointing part of the box.

The single models we ordered all came in clamshell plastic and were cast in resin.  The models seem quite nice and are no less detailed than the plastics as far as I can see.  There is some mold line and flashing that will need to be cleaned up but nothing that isn't expected and of course I assume that there is probably release agent on them so they'll need a warm bath before assembly and painting.

Speaking of painting.  With the models coming in so many pieces and some of which are quite tiny and fiddly I think they would really benefit from being painted prior to assembly which doesn't suit my style (or patience) but I feel that it should be said.  The cards are nice thick stock and the instructions are extremely nice.  Not only are the parts on the sprues numbered and the instructions tell you the number but the instructions also contain pictures of the sprues themselves highlighting the parts for each model in red so that they are even easier to find; really makes finding the parts and getting your models assembled a snap.

After getting a couple of models assembled I realized that the scratch building I was making is a fair bit too large; apparently the Battletech models I was using as an assumptive scale are slightly larger than the WWX models themselves.  That said I'm still going to finish it and I'll make it work for me.  Until I get some more stuff built though we're going to be playing games on a fantasy table.  Maybe we're making our way out west and this is us crossing the Great Plains.  We'll get to the west eventually.  As for that building; I've lowered the roof.  I feel it looks much better now and not so overly large. 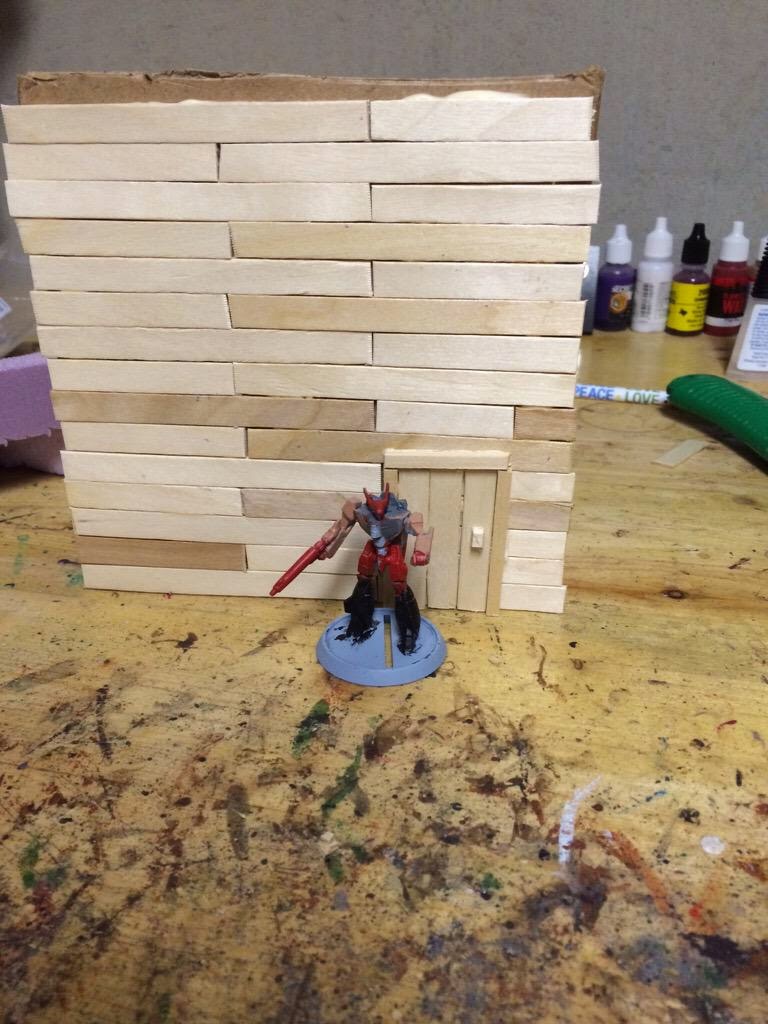 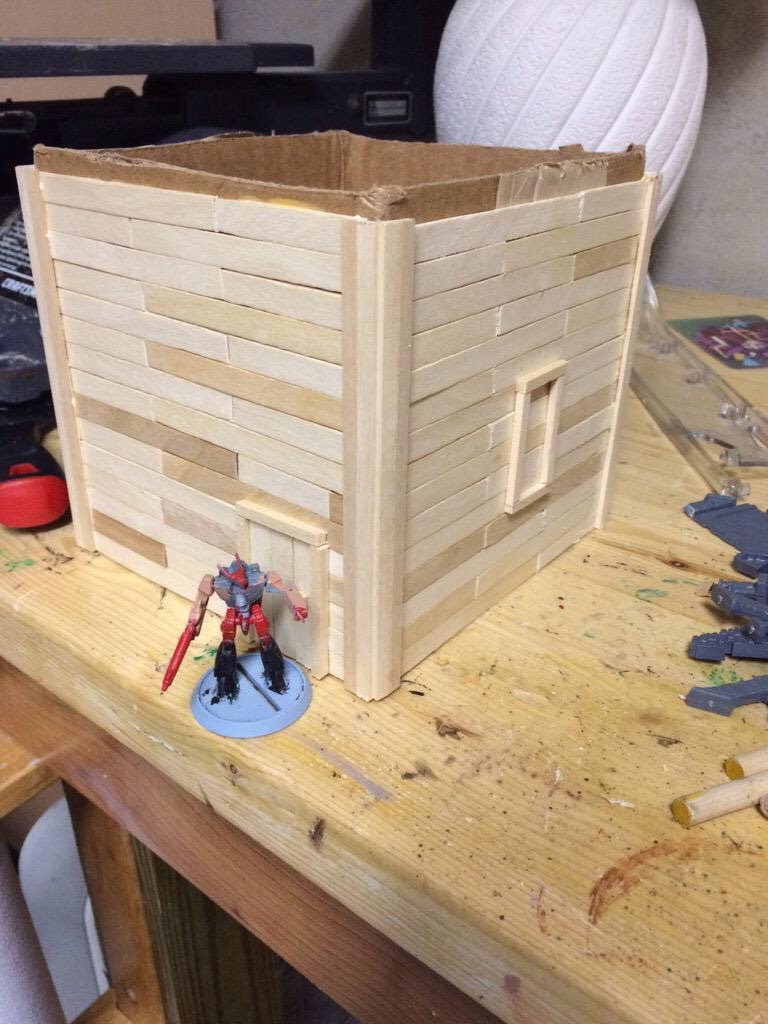 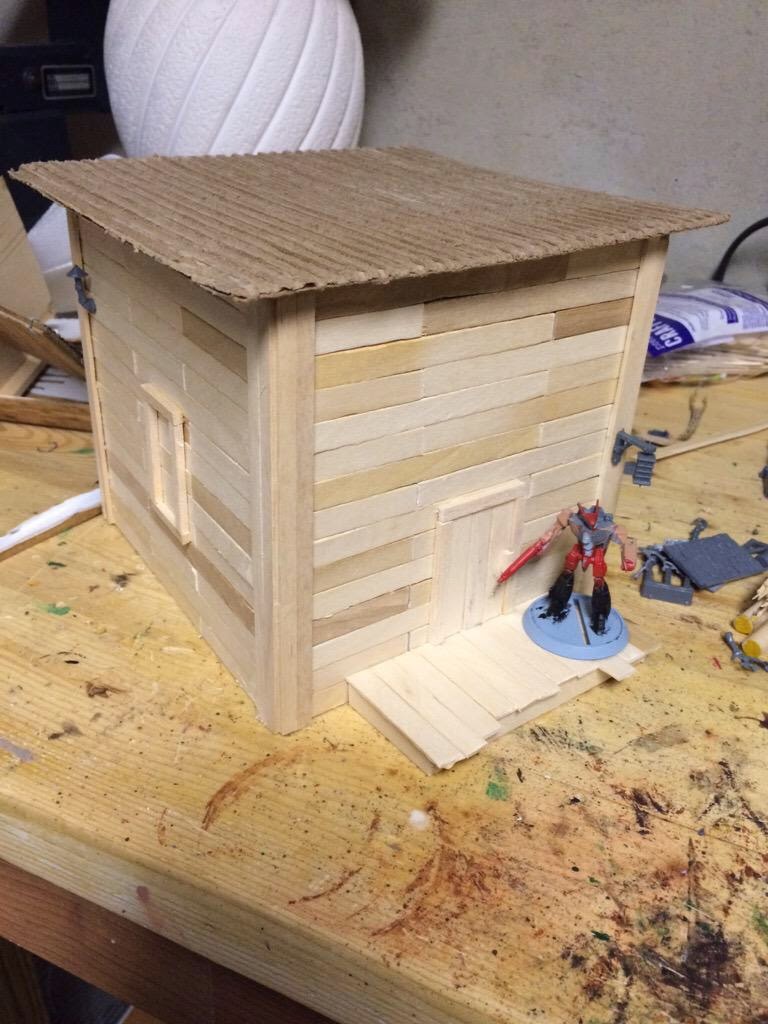 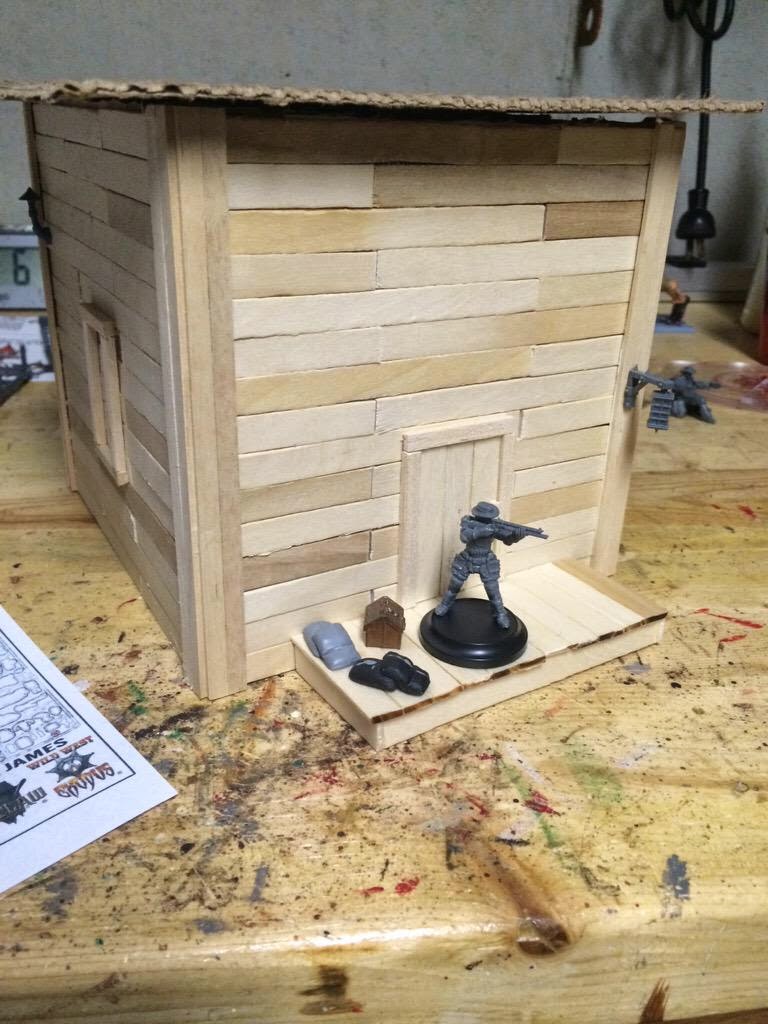 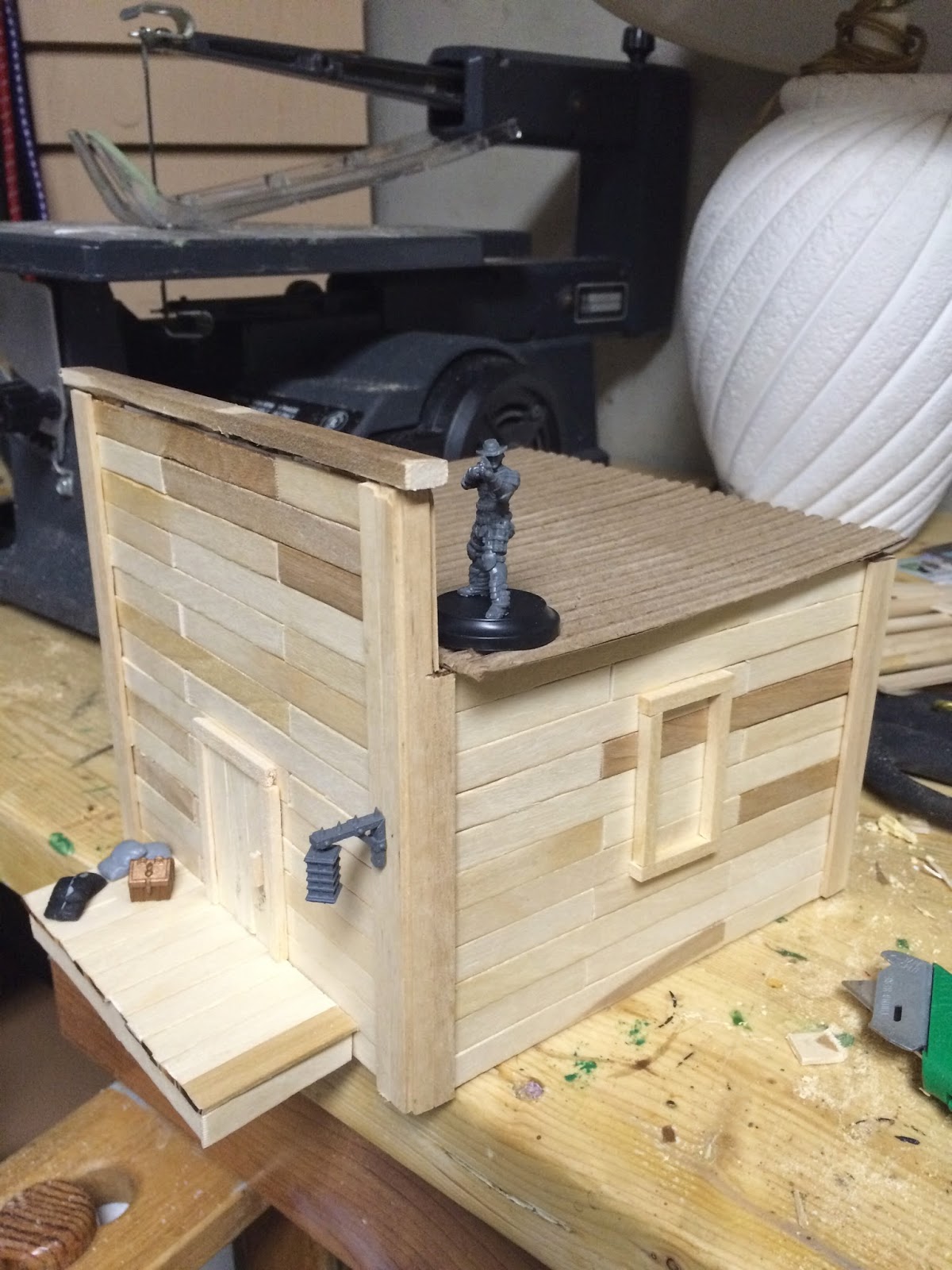 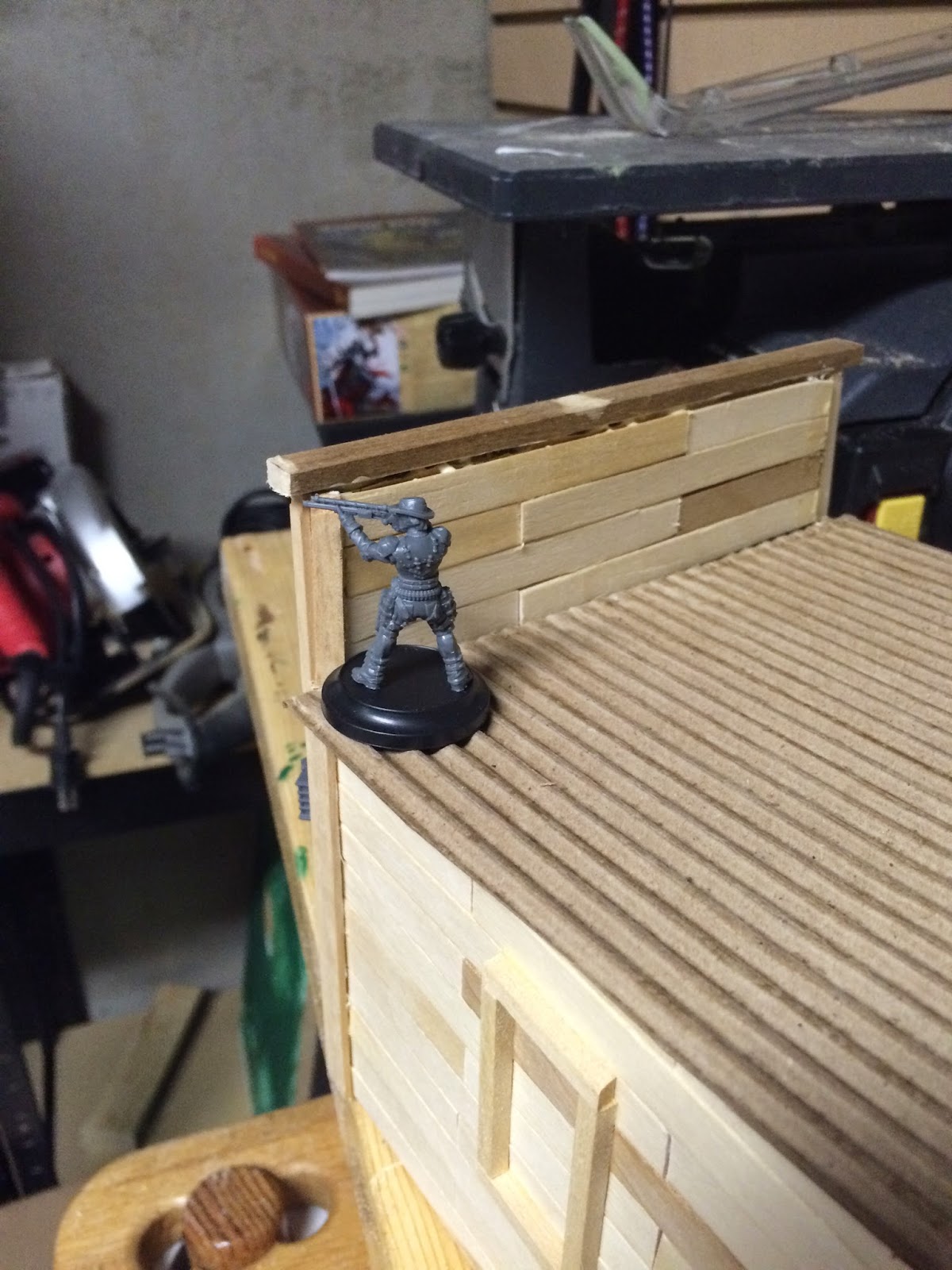 Posted by Joe Flesch at 6:42 PM No comments:

Theres a new game in my town...

Well it finally happened.  GW has gone and broke us down with their... well, everything.  Interest in Fantasy was super high when the End Times started coming out and over the last couple books it has dropped as the power levels and storyline have continued.  Never have I heard so many Fantasy players discuss other game systems and switching out of GW to other companies games and while many of us tried to corral people into the GW Specialist lines that they no longer support it was only a matter of time before the bell rang and rang it has for my local friends and I.

Rang high noon at that.  After much discussion over the course of a couple months and some play testing of various game systems we have settled on picking up Wild West Exodus produced by Outlaw Miniatures which is a creation of the company Battlefoam.  It takes on an alternate version of history branching off just after the Civil War when a fantastic new technology is discovered which catapults the Wild West into a very Steampunk modern era of warfare.  Suddenly the pony express is riding hover bikes, driving buggies and flying in gyrocopters.  The old fashioned 6 shooter exists but it now fires explosive ammunition and rifles shoot lasers and plasma.  Cybernetic enhancements and body armor protect some from the worst of the weaponry but it truly is wild!

So it’s now April and its been a couple of weeks since Adepticon ended.  What a glorious time it was for me and everyone else involved.  While I'll obviously talk plenty about Adepticon on the podcast I thought I'd make a post here on the blog and stick all of my battle reports on here, since I imagine I won’t cover them too much on the show.

Showed up Thursday morning and played in both of the 1,000 Point How You Use It Tournaments.  Skaven in the AM and my Dwarfs in the PM.  Helped staff during the Team Tournament on Friday, played Regiments of Renown that evening.  Staffed the Championships on Saturday, played Warbands Saturday night and finally helped staff on Sunday.

I can without question attest that I am indeed getting older as on Saturday I was feeling super worn down and tired.  It didn't get much better from there with me becoming physically ill on Sunday afternoon.  I blame the hotel food, but it may have just been that combined with lack of sleep.  It’s really quite difficult to say.  I really enjoyed the vendor hall this year as the new venue provided a larger space than the previous hotel. That isn't to say that I liked this hotel better overall as I think I actually prefer the Weston.

I want to take a moment to sum up my overall thoughts on Adepticon as a whole and I think the best or at least easiest way to get that information across is simply in a list.

Hotel: Was ok, it’s a give or take.  Bigger, brighter, slightly more expensive.  I did hear some complaints about uncourteous or unhelpful staff, but did not experience these things for myself.

Food: Overpriced hotel food; Weston gets the 1 up on this for Target and the mall food court being in walking distance providing more options.

Cost: Slightly more expensive as I said, but not enough to stop me from attending again, maybe at most like $20 total more.

Vendors: To me it seemed like there were a lot more vendors although I distinctly noticed the lack of a couple long time vendors, Armorcast and Sabol Designs.  There were however quite a few new vendors, and a lot of new miniature games being shown, which is cool.

Attendance: I don't have the actual numbers information for the con, but overall it really appeared that attendance was hurt this year across the board as far as Games Workshop events were concerned.  There are a myriad of factors that could be to blame for this.  New editions, rule sets, venue, time of year, cost, etc...  It’s hard to really point the finger at one thing and say that it was at fault.

Swag: The con is still throwing good swag your way just for showing up to the event and Privateer Press continues to knock it out of the park throwing starter boxes in and this year giving out a free rulebook of your choice, either Hordes or War Machine.  Talk about trying to convert you, but still you have to appreciate the effort.

Prize Support: For the winners of the tournaments I heard that the prizes were quite nice this year as far as product was concerned.  Other than that the customary plaques and this year certificates for a myriad of smaller events in small frames.  They seemed a bit cheap but I'm happy with something rather than nothing.  Also it should be stated that even with small certificate in frame you still got good product for prizes as I'll discuss later.


Here we are with Episode #80 of The Waaagh Cast!  Joined this episode by friend of the show Ryan G. we go over our 2015 Adepticon experience much like I said you could expect at the end of the last show that Chuck and I recorded.  A great time was had, a new venue was explored and we discuss our games of course.  If you've still never attended Adepticon it is still a convention that comes highly recommended by all of us here.

Posted by Joe Flesch at 6:59 AM No comments: