So Ryan and I got together last night as we’ve been doing every other Monday for a while now to play a game.  As its August we were running our 2,000 point lists; not to mention there is a 2k tournament at our local store this Saturday which we wanted practice for.  Sadly my i-phone broke last week and there are no photo’s.  Bummer…  So the lists:

We rolled for scenario and got Meeting Engagement.  Ryan will end up deploying and going first.  This is a really bad scenario for me as I really need a turn or two to shoot at Ryan before engagement happens, but with him starting so close he can easily make turn 2 charges.  Not helping me and making me just practically give up on turn 1 was the scenario.  Ryan’s entire army showed up but I ended up not getting my Spears, Knights, Cannon and Flagellants so huge chunks of my army were missing.  This left me to bunker all of my characters inside my Handgun unit for the first turn.  I put my Priest on Horse on the far left flank to counter Ryans 2 Sabretusks and hope that when the Knights came on he would be able to join them.  My Tank I put out on the right side pretty close to Ryan’s Ogre unit.  I was hoping for early combat and totally screwed up not seeing the Sabretusk behind the woods next to the tank.  Everything else started in my back corner.

Turn 1:
Ryan
Ryan charged his Sabretusks in; two into the mounted Priest and one into the Tank.  His Leadbelchers move into the building in the dead center of the board while everything else moves up.

Turn 1:
Joe
My Spear block comes on next to the Handgunners and all the characters jump ship except for the level 2 Mage.  The Flagellants came on just to the left of the Spears and the Knights came on near the mounted Priest.  From there I threw some magic which was negligible.  The Hellblaster tore into the Ironguts doing some decent damage.  The Tank killed the Tusk and the mounted Priest sat stuck in combat with the others.

Turn 2:
Joe
I go for Mindrazor on the Spears but don’t get it.  I do reduce the Strength of the Guts.  Knights hit the Stonehorn but don’t break.  The Tank wins and the Ogres run.  Mounted Priest wins combat and runs Tusks down.  Volleygun shoots the Guts again killing another.

Turn 3:
Ryan
Fangs and Guts charge Spears and I lose and break, he reforms Fangs to go after Cannon and Guts reform to go after Handguns.  .  Stonehorn combat draws.  Ogres continue to run.

Turn 4:
Joe
Tank goes south into the Guts and kills the unit.  Slaughtermaster lives and flee’s.  Level 2 fireball’s a Fang off.  Cannon fires at Stonehorn and does 2 wounds.
Turn 5:
Ryan
Stonehorn charges Knights and catches them from their flee.  Fang moves towards Cannon.  Slaughtermaster rallies.  Leadbelchers shoot Level 2 to death and Ogres rally.

Turn 6:
Ryan
Slaughtermaster moves away from tank.  Everything else basically just moves around.

Take Away:
That scenario sucks.  No, really it does.  I completely didn’t get to see what would be the general full effectiveness of my Knights with the Priest in it.  The Flagellants and Spears were engaged on my board edge instead of open field where I could run away if I lost combat.  It just sucked.  That said I actually only lost this game by roughly 200 points.  One of the things Ryan pointed out is that even though I’ve been losing to him consistently it has always been low losses where on the 20-0 scale I would be getting decent scores even though I’d lost.

I’m actually pretty satisfied with the way the army functioned.  There were some definite screw-ups on my part.  Misplacing the Tank so Ryan could throw a cat at it on turn 1 was a big mistake.  I’m still really okay with the Engineer not being used on the Volley Gun.  In fact, in every turn of it firing it never misfired and I don’t think the higher BS would really do much extra.  My magic phases in general were pretty cruddy as well.  In fact the turn that I went for Mindrazor I had rolled snakes, channeled 1 and used the Power Stone to manage the value, but didn’t get the IF I needed and Ryan just scrolled it.

The only thing that I keep wondering is if I should change the magic Lores up in the list and if so, what to.  I’m mostly happy with the way things are going, but I also wonder if there is a better character configuration I could be running.  Just the usual questions.

For the 2,000 points I just have to paint my Knight unit which I should be able to finish by this months end.  The problem is I finished the 1st test model last night and I really dislike how it came out.  I’ve also painted a Mortar up so I can try it some time.  Its extremely situational but with Shadow if I ever manage to get a -3 Toughness on someone it’d be nice to have it.
Posted by Joe Flesch at 3:14 PM No comments:

July went zooming by, but I did manage to get a couple of things painted for the Ogre Kingdoms. The main model was my Firebelly. 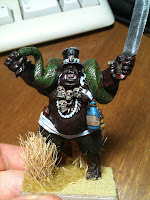 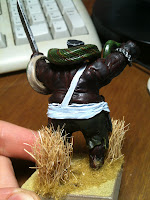 I really like the GW Firebelly, but I have never been great at painting fire so I chose to use an alternate model for my Firebelly. I tracked this guy down from a company called Titan Forge. They have some great models, and if I can find a way to fit some of their other Ogres into my army I will. I just wanted to start small to make sure the scale was correct. This guy is a little taller, but fits in just fine.

I have used him a few times now, and I do like the Firebelly character. I don't think he fits into every army, but I have found him great for low point games.

Next, is one more sabertusk. This now gives me three and I am happy with that. I have yet to use 3 Tusks in a a game, but we'll see how it goes. I dislike the fact that they can cause panic, and they may just cause me to start tripping over myself, or just plan getting in the way. 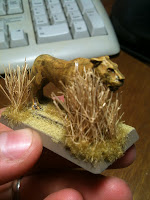 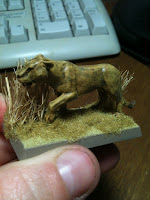 
I have two local tournaments coming up over the next two saturdays, but not sure what list I will be doing for the 2000 pts this month. Both my Firebelly and extra cat will be in my 1600 pt tourny list, but does not look like either will be in my 2000 point one. Either way it should be fun, and I am considering a few different things to do for next month. I really should do my Ironblaster because they are awesome, but I really want to paint up a Giant, which are fun, but far from awesome. Only time will tell.

I've nearly completed my Tank.  Well, it is completed, just missing its base at the moment.  I went for fluff here right?  LOL!  There are 14 Shields on the tank itself.  Well 15 if you count the small one on the back of the boiler.  I painted one shield in the colors of each of the 14 provinces including those that no longer exist (Soland and Drakwald).  The 13th is the colors of the Church of Sigmar and the last is the colors of the Stirland River Patrol since that's my army.  That is also what I did the rear shield in is Stirland Patrol.  I dig it a lot myself.  Hopefully you'll all agree. 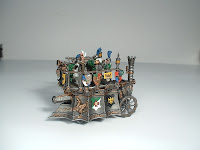 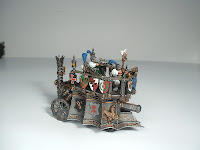 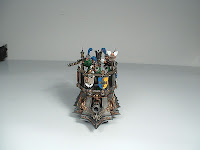 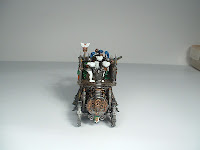 Posted by Joe Flesch at 5:49 PM No comments: