So I got together with Dave tonight to get a test game in at our 1,000 point level.  Although you could look through old posts until you find the lists I'll re-iterate them here. 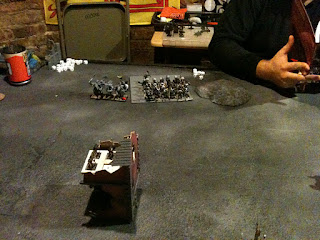 For some odd reason I didn't get a picture of the whole board after set-up but this was Daves right flank.  Minotaurs and his big Gore block.  Actually this is at the bottom of my Turn 1, I've already poisoned one Minotaur from the Building.  There is a Mage behind the Minotaur and 1 in the Gor block.  To the right of this picture is a unit of Bestigor also with a Mage and some Harpies hiding behind a tower. 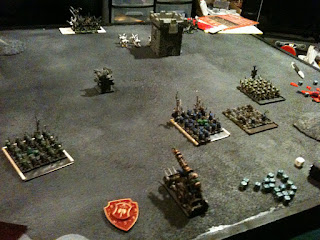 So here you can see the rest of my army set up.  His Bestigor in this picture are nearly off of the board.  The WLC had a good hit killing I think 7 or 8 and he panicked.  He did rally at some point just on the table edge to stay in the game.  The Harpies are grounded behind the tower due to a Warp Gale while I begin my advance across the board. 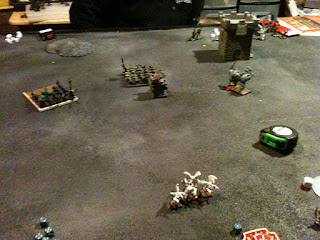 This is the picture at the end of the game.  It really doesn't do justice to the carnage that was had.  His Harpies eventually killed the WLC.  His Bestigor beat the Giant Rats at which point the Plague Monks hit them in the side and powdered them.  The Clanrats you see had a lucky turn where Dave's dice turned against him and he lost combat to get ran down by them.  His Minotaurs although way out of position survived by eating one of the Clanrat blocks and later charging and managing to catch the Giant Rats who were fleeing from their own lost combat.

I feel the lists both performed pretty well for what they were.  Dave and I discussed a number of things, primarily among the things were how to try and fix his leadership issue.  The highest he could achieve was a 7 in this game, and while my own high for LD was only an 8 it was still there.  I really missed my Weapons Team in this battle.  I know deep down that the Mortar does very little but I like it for that extra little oomph it can add.  However, I went from 25 troops to 100 this month so now with my force heavily bulked up I know that next month at the 1500 point level I can start adding the rest of my little toys and things.  Dave picked some really cool models from I think it was Hordes or War Machine for his Harpies as he felt the GW ones just weren't up to snuff and these look tops.  It was a solid game and very close.  It should have been closer if it weren't for Dave's crappy dice rolls in combat.  The last round where I defeated the Gor block with Primal Fury active he managed to kill only 1 Clanrat.  It was abysmal.  Plague Monks are tops, they did a lot of damage when they got into the Bestigor; I still feel though that I'll be adding a Priest to the unit to ensure that they get the proper killing power they need.
Posted by Joe Flesch at 2:02 AM

Good coverage. Enjoy hearing how well this is going. Makes we want to gassssp...play square base.