Chuck Jiardina:
Well my name is Chuck and I have been in the Fantasy hobby for over a decade.  I've helped run a Tournament series and Co-Hosted the Waaaghcast.  Additionally, I've worked on many armies; DoC, WoC, HE, O&G, Brets, and VC.  During my work on O&G in 2011 I painted and converted up some Ogres with Orc parts thus the OrcOgre was formed!  Over the past few months i have worked on basic units but nothing special with the advent of the new book its time to test out the army at a small level and work my way up! 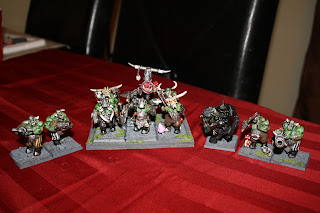 Ideas/Strategy:
The general idea of the list is to deploy the leadbelchers on the flank of the bulls with the bruiser in the middle.  Use is leadership 8 for any psychology tests I have to take.  The leadbelchers can take a pot shot at any incoming threats or redirect them for a turn.  The bulls with the Bruiser will be able to either take a charge or break any enemy units.  My common opponent will be Orcs and Goblins so I will have to deal with small cheap units with multiple ranks.
Posted by Joe Flesch at 7:17 AM