Here it is, Oct 1st and the Tale of 4 Gamers has officially begun. With that being said, Joe and I cheated a bit and played a few 500 point games the other day, so I figured I would do a quick battle report on them. We played 3 games in total, and I think it only took us about an hour and a half in total to play all 3. 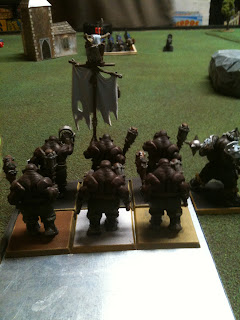 Game 1:
Game 1 was probably the fastest game I have ever played. Joe got first turn, and went to cast a spell at my Ogres and miscast, causing his wizard to became level 0. I was smiling ear to ear, because I knew I now had this game in the bag. He then fired his lightening cannon into my unit of 6 Ogres and killed 3 of them. My Unit, including the Bruiser, then proceeded to fail their leadership 8 panic test and I rolled high enough to flee off the table. I had not even got a turn yet, and all I had left was my 3 Leadbelchers. So much for having this game in the bag. We called it at that point and set up for game two. Solid victory for Joe, and I just kinda stood there in shock. Stupid dice! 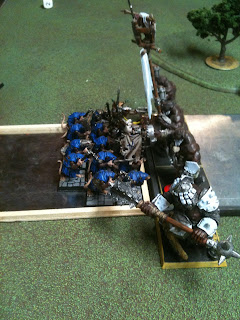 Game 2:
Joe was nice enough to let me go first this time, and I quickly closed the gap. My Leadbelchers took out his Gutterrunners, which are ridiculously good for a unit of skirmishers. His magic and shooting took my 6 Ogres down to 3 plus the Bruiser, but I then got into combat with his Clanrats. His rats held for a few turns due to steadfast, but I eventually broke him, and that was the game. Victory to the Ogres and we were now tied one game a piece. 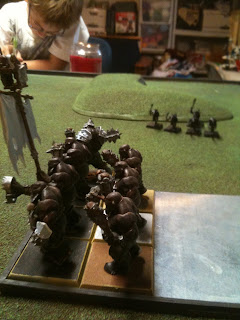 Game 3:
Joe again went first this game, and I thought it was gonna be a replay of game 1. His cannon once again took out two Ogres on turn one and I again panicked. However, my Bruiser was not in the unit this game, and this time I remained on the on the table and was able to rally. My Leadbelchers again took out the Gutterrunners, and my Bruiser was headed towards the cannon. My Ogres made it to the Clanrats, but were only 3 strong, and only lasted a turn before they were broken and fled from combat. The Bruiser took out the cannon, and my Leadbelchers charged into the remaining Clanrats and broke them. Overall, this was a very close game, but I pulled it out in the end.

Overall:
Overall, 500 points is a very frustrating, but fun points level to play. One bad dice roll really changes the outcome of game, but it is also very fun to play and laugh at the truly randomness of these small games. Going first I have found is also a big deal at small points. I look forward to playing the other 2 Gamers and see how those games go.