So a few days ago Ryan, Dave and myself got together for our 1st end month game of our article.  I wrote up a set of storyline scenario's for us to play.  We gave Ryan an additional contingent of 20 Empire Spearmen with shields and a musician as well as 5 Empire Handgunners to defend a small Empire village.  (6 Buildings in the center of the table)  Dave's job was to have his Beastmen just raiding about burning buildings by either entering them or throwing torches on a 5+ when within 4-6" of a building.  My job was to collect slave tokens by entering and then exiting buildings. 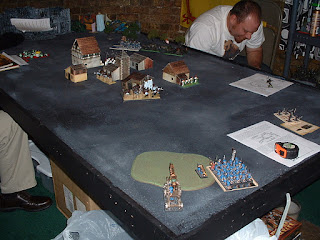 After deployment here is our Board.  Dave was lined up along the small forest of trees in the back while I was coming up from a sinkhole represented by the green base.  Ryans Ogre Bull unit faced me while he sent the Spearmen after Dave.  I tried to be cheeky and send my Gutter Runners in by that far building in the back, but on turn 1 Ryan was able to see them with his Lead Belchers and smoked them.  I was most displeased. 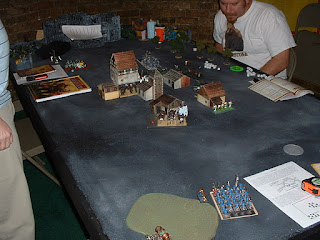 Turn 1 for me and Dave was pretty shoddy.  Dave moved forward in a most threatening manner charging Ryans Spears and not only defeating them but catching them.  My Skaven hardly moved waiting for some damage to be done to the big Bull unit, but fate was against me and my magic not only failed but the WLC also misfired and turned the other direction.  I was betrayed I say!  Dave tried to throw torches at buildings but failed all his rolls. 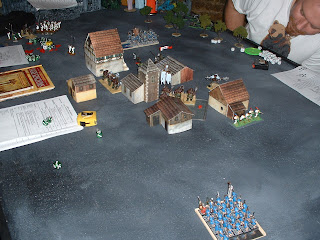 Turn 2 you see Dave's Gors running away there in the back.  Ryan s Bruiser though hard to see on the right was going to hit them in the flank after their successful kill of the Spearmen block and he decided to skidaddle away from that thing.  He continued to unfortunatly fail at burning houses while Ryans Lead Belchers destroyed his Warhounds that were between the Bruiser and his Gors.  My WLC failed again, but as you see the Ogre Bulls running away I managed to irresistibly kill 2 of them along with 7 of my own Skaven with a Warp Lightning Spell from my Engineer. 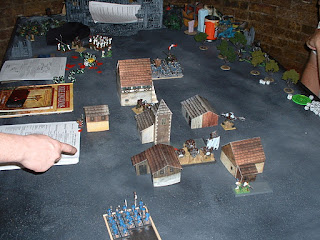 With the Bulls rallied I moved the Skaven off to go around that far side of the building to attempt to get a token before games end.  Dave rallied his men behind that far building and the turn ended pretty uneventfully.  Lots of rallying leads to lots of nothing much happening. 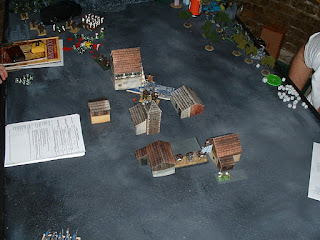 Here you can see my Clanrats are no longer near the building.  His bulls managed to see the last rat or two and declare a charge in my flank.  I was having none of that so I took off.  Dave decided at this point to charge his Gors into Ryans Lead Belchers and though he won combat they held.  The Bruiser who you can't see at this point was behind the little church in the center.  I had teleported my Engineer into that building to the left of it and irresistibly Warp Lightninged 3 of his 4 wounds off but insultingly killed myself.


This is the point where we ceased taking pictures.  I know Ryan has some on his phone that perhaps he'll post later in his own report.  He turned those Bulls around after that last shot as he didn't see me doing much.  Daves Gors did indeed die and at the very end of the game he managed to finally get lucky and burn a house down, while on turn 5 I rallied those Clanrats and on turn 6 managed to make it into a house.  All in all, I feel that Dave and I were really fighting the uphill battle.  Not necessarily because any one reason, but Ogre are very strong at 500 points it seems.  We could never quite do the damage we wanted to, not with magic or anything else.  I think we both lacked the troops to deal with him honestly.  Our single blocks were just no match for his 1 block.  Something we both plan to remedy in our 1000 point lists that you'll see us discuss in a few 5 short days on November 1st!

The Scenario's weren't terrible, I think I definitely need to work a little harder on them.  There were some questions brought up and things I missed on the initial writing.  Still I think it gave the game a more interesting feel than just, hey we're killing eachother.  I'm looking really forward to November, both from the painting perspective but definitely from the gaming side of things.  As a bonus in November we're running one of our Gryfalia's Aerie tournaments which means that Chuck and while running will be able to get in a game with our 1,000 point lists.  I'm very excited to give it a whirl.  Hopefully you all are enjoying the articles!
Posted by Joe Flesch at 4:44 PM

i was screwed over!! RAR!! I will be buying a box of minos soon along with harpies or some counts as models.