Met with Dave tonight to get in a quick game with our 500 point lists and had some good discussion afterward on ideas and thoughts of list development. 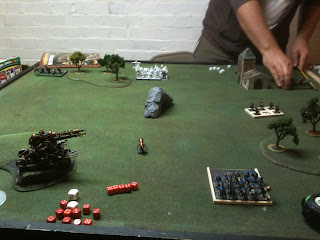 This photo was after turn 1.  There was a unit of Centigor in front of the Gutter Runners.  They were gone at this point naturally.  The lightning cannon turned and misfired off into the woods.  The Warlock Engineer Miscast and blew a chunk of his own unit apart forcing them to panic away.  Stupid rats... 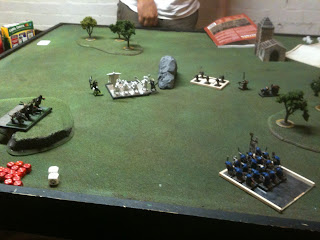 This is around turn 4.  I'd rallied, the Runners had killed the dogs on the right and the dogs on the left got the WLC.  Things we're shifting around to stay out of charge arcs and distances so I could keep putting magic and shooting pressure on him. 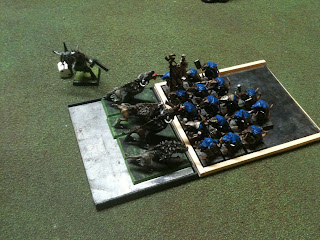 The eventual end of the game combat.  Dave made that super charge against me with the last 5 Gors on the bottom of Turn 5.  I killed them of course, well all but 1  which got killed by the run down.  Afterward on turn 6 I charged the dogs killing all but 1 and while I didn't catch it, the last did manage to flee off the table at the bottom of turn 6 giving us a difference of about 60-70 points.  A draw by the book.

So it was a fun game that I thought could have gone either way for a little bit.  After I got his Gor block whittled down to 5 though I was pretty confident in a victory.  The WLC did nothing; damned thing...  We discussed dislike of the hounds and the fact that perhaps in a differing environment that he may be able to get the Centigors to work somehow; but unfortunately both Ryan and I have mobile gun platforms in the form of Leadbelchers and Gutter Runners meaning that they are likely never to survive.  Magic while quite active never really added a huge impact to the game.  Well, the Engineer got sucked into the warp on the last turn, which was the second time I'd miscast on 3 dice in 1 game.  Dice hate me.  Really looking forward to next month along with the end of this month when we get together for the 1st big 3 player battle that I have yet to write a scenario for, but I plan on it.
Posted by Joe Flesch at 9:04 PM

we'll see how his list changes with the coming months, I do think we will all change anyways.

So far i have learned either im bad at this game or my army need some retooling.