The other night Joe, Dave and myself played a three player game for the wrap up of the 500 point month. I won't go through an entire battle report since Joe already has, but I will more or less just give my opinion on my army at the 500 points. Also, now that baseball season is over, I will be able to get more painting done. I have fallen behind a bit, but Congratulation Cardinals! 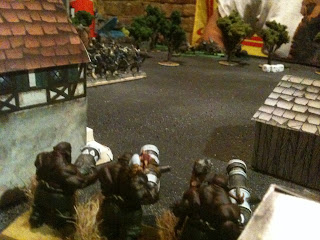 Leadbelchers at 500 points are awesome. They always got their points worth, and really helped me win this final battle. They are great at shooting the smaller things, and can still hit just as hard as normal Ogres in combat as well. These guys are going in every Ogres army that I build. 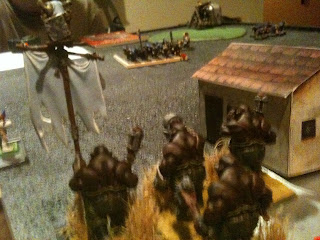 Then there was the Ogre Bulls, or just Ogres now I guess, but they were also amazing at low points. It just seemed that both Joe and Dave could do nothing about them in combat. It's just too many attacks, and too many wounds.

Overall, I am still happy with my choice for Ogres, and can't wait to get the 2500 points done so
I can take them to a tournament.