So, as most readers know I am part of Team Cranky for the Extra Life fundraising effort.  The team has raised almost $3,000 for Children’s Hospitals and we’re all quite proud of it.  The basis behind Extra Life is just like the old style Walk-A-Thon’s, where you get people to pledge money to you while you in turn pledge to do something specific for a set amount of time.  In this case, play games for 24 hours straight.  Something every gamer aspires to, right?  Well, I’m not a big video gamer, but I am a huge fan of board games and obviously Warhammer.

The date for the big game-off this year is Oct. 20th, and sadly I have a commitment to which I cannot falter on that day.  However, even in the Extra Life charter they acknowledge that life happens.  They say there is no need to perform your gaming marathon on Oct. 20th, but to do it in spirit on whatever day you can.  So for myself I’ll be performing my gaming marathon on Oct. 27th while participating at the convention Flat-Con in Bloomington, IL.  Flat-Con is a smaller convention, and while deemed primarily a board game convention there are miniature games involved as well.  A local player will be running a small 1,000 point Fantasy Tournament on that Saturday which I’ll be participating in, but my old co-host Chuck and I will be partnering up to get some serious gaming done. 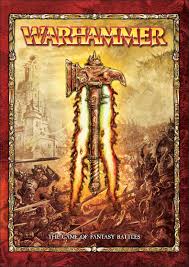 We plan on starting the day out with a short 2-player ladder campaign.  We’re going to run the Territorial Dispute campaign from the old General’s Compendium with the new 8th edition rules where required.  It should provide us with some really interesting games as well as a couple of articles for me to post on the blog later.  Depending on time after we finish that we may get in a game of Blood Bowl as Chuck has expressed interest in finally learning so that perhaps he can take part in The Waaagh Cast Cup! when it gets to Season 3 this Spring.  By that time it should be off to the Tournament with us.  Assuming the tournament ends at a respectable time (probably 7ish) I’ll be partaking in either whatever open board games I can seat myself at or picking up random Warhammer players to continue getting games in.  Perhaps I’ll even drag Warhammer Quest up with me for the event.

As a little preparation for the day though I’ll be writing a number of blog posts leading up to it discussing a number of things pertaining to the days fun activities, so keep a weather eye out and look here for some more stuff in the coming weeks.
Posted by Joe Flesch at 4:38 PM