Once Upon A Hobby – Warhammer Skirmish

Discussion time again boys and girls.  Today we get to discuss the book mentioned in the previous post ‘Warhammer Skirmish’.  We talked last time about how great the Appendices of the 6th Edition WHFB Rulebook were and how the third appendix contained rules for Skirmish games.  That is to say, small squad level games with a handful of models instead of giant rampaging armies.  These games are excellent ways to squeeze in a game of some Warhammer in which you may have limited time to play like a lunch hour from work, or perhaps if you finished your normal game, but still have maybe an hour to kill before your off to do whatever you do in your day to day life.

Skirmish is based off of the idea that you use normal models from the GW range, but instead of whole units you use single models and they move and act individually instead of as a whole.  A sample grouping may be something like:

Of course there, once you drop to this level your not even required to field a Hero, but can simply use unit Champions.  Also as there are no units, a Banner and Musician become pointless.  All the other normal rules are in effect.  Even magic still has a place in the game although you must fudge the rules a little bit for it to be effective.  You play the game just like normal from there out; moving, shooting, casting, fighting just like in a normal game of Warhammer.  The main differences being that when you lose your last wound you may not be entirely out of the game.  In fact there is a good chance your men may just get back up to continue fighting on.  Of course, men will only stick around so long and so the route rule exists which states when your force is down to 25% or less of its starting models you take a LD test at the beginning of every turn to see if your men flee the field or not.  Its all quite interesting.

You and your opponent are free to just duke it out as normal, attempting to completely wipe each other out, but more often than not you’ll want to decide a reason for the groups to be fighting.  This goal oriented play makes Skirmish a more enjoyable game as simply running at each other with the purpose to kill at such small model counts may be quite boring.  As such I think this game really shines in scenario play which is where this book comes in.  The Warhammer Skirmish booklet contains 25 scenarios already put together for you to play, each with its own evocative theme and reasoning behind it.  They also specify what armies and models would be used although the book also states that these are simply guidelines and you should use whatever armies/models you feel you would or those that you own. 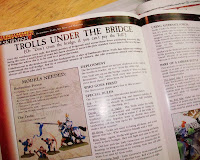 There is a nicely written preface in the book which speaks as to why you might want to play Skirmish scenario’s as well as a handful of extra rules that were not contained in the Appendices of the 6th Edition book.  It goes over the ideas of things you’ll need such as the size board, and some simple terrain, but it also explains that you can really go to town with Skirmish games.  Most of the scenarios contain some extra information about how to fit them into the picture of larger games such as suggesting that a scenario which has you attempting to gather up loot from a battlefield may provide the winning player with an extra allotment of troops over the point’s value of a regular sized game.  Or perhaps a mission where a small band is escorting a wizard will decide whether or not you can field a wizard in your next game.  A number of the scenarios also contain some extra tidbits about building special pieces of terrain for them which may or may not be required.  There are plenty of nice full color pictures of conversion work that the GW hobby team had built just for the scenario’s as well as pictures of wonderful Skirmish battlefields that they used which really inspire the creative side of me and I assume you.

Finally the book ends with a discussion about linking the Skirmish games into a campaign perhaps involving multiple players.  They even go so far as to have a handful of employee’s play out a small simple campaign using some of the Skirmish scenario’s to influence the final battle so that you can really get a grasp on what they’re talking about when they discuss so often linking games together.

Overall, I’m a big fan of this book.  The specialized tables, terrain and scenario ideas really do inspire.  I’ve thought so many times about building special boards and the like just for games but usually cannot justify the idea.  Maybe if I owned a game store.  However that said, I see no reason that a tournament style player couldn’t look at these boards and easily get some good ideas for an army display board.  If you’ve played Skirmish and liked it I think this book is probably a must have.  I loved the squad based games when I was first getting into the hobby and while I haven’t played any in a long time I’m hoping that Chuck and I really enjoy the scenario that we’ll be playing in our small Tree Campaign.

To give you some more thoughts as to whether you might want to go out and hunt down the magazine I'll post a bunch of pictures below for you to browse.