Once Upon A Hobby – Warhammer Generals Compendium

Ah, here we are again, but now we have with us the big boy of hobby extra’s.  The Generals Compendium is a large 176 page behemoth that is packed full of so much hobby goodness it really makes the eyes water.  So lets get into a little more in depth discussion here. 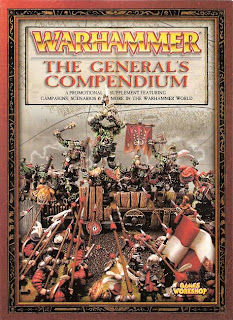 The book is broken down into nine chapters over its course.  The first four chapters of the book deal strictly with ideas and information pertaining to campaign play.  The first chapter is simple campaigns, like ladder and tree campaigns.  This will be what Chuck and I are doing; in fact the Tree that we will be using is straight out of this book on page 11.  Chapter 2 goes into Map Campaigns and the ideas and rules for that.  It goes through a full rule set for the campaign and how to keep track as well as giving you a bunch of modeling and hobby ideas for the map itself.  Chapter 3 is a campaign setting that they have provided for you “Campaigning in the land of The Border Princes”.    As a campaign setting it provides everything you need about events, landmarks, etc… awesome for anyone looking to launch a campaign and not have to come up with things all on their own.  The fourth looks into Game Mastered campaigns.  This is a chapter that I haven’t read as I have no interest in this style of campaign as it requires the person running it to not play and frankly, my hobby time is going to be spent playing, not doing bookwork for others.

Chapter 5 is dedicated to competitive play such as tournament focus.  I like this chapter a lot because of some of the ideas in it.  Deathmatch challenges, hidden set ups, etc…  It’s a great read for ideas if you run a tournament yourself, and could probably give you some great ideas even if you don’t use what is directly provided for you there.  Chapter 6 goes through what it calls, “Hostile Terrain”.  This chapter deals with scenario’s that have special rules for terrain such as raging rivers, dry deserts, poisonous plants and dangerous woods.  Well worth a read, not to mention there are a lot of hobby articles in this chapter for building terrain as well.  There are some tables in here that look really good and if I didn’t already have a table I’d be modeling one up out of here for sure.

Chapter 7 may actually be the one chapter that seems to be nearly useless at this point given that 8th edition actually contained rules for allied armies.  That said, there’s no reason that you can’t abide by this table.  The chapter contains rules, ideas and scenarios based for mutli-player games.  This can include allied armies, players playing multiple armies in a game, etc…  The most interesting parts of this chapter pertain to the rules you can apply to armies being untoward with each other.  Again, this is covered with the suspicious allies part of 8th edition, but some of these rules could still be used and add some flavor to the game.

As we move into Chapter 8 we see a real divergence from regular Warhammer in a big way.  Boats.  Yes, that’s right; I said boats.  A whole chapter dedicated to using boats of different sizes in a game. All the way from dinghies up to large multi-mast sailing vessels.  There are special rules, turning templates, unit structures and a ton of other stuff.  Naturally as this was a hobby book it also contains construction ideas/articles and some excellent resources.  In fact, my Empire army which is Stirland River Patrol is going to be using one of these boats for their display board.  Assuming I ever actually finish the damned thing.  While I think this chapter is pretty great in terms of interesting rules it also adds a lot of extra rules to what can already be a complex and confusing game.  I wouldn’t suggest trying these unless you were a seasoned player.  Maybe I’ll try them out one day, but not likely anytime soon.

Chapter 9, the final chapter in the book moves into a fantastic section that really excites me personally.  Sieges, Raids and City Sacking.  Sounds great right there doesn’t it?  This chapter not only has some amazing modeling ideas and articles in it as far as terrain is concerned but also contains a lot of really awesome information to add to the siege rules you already have.  There are extra ideas for upgrades to fortresses; the ability to sack a cities buildings as well as the walls and neat ideas for loot.  There are rules for special buildings in the city that get sacked such as stables or armories which can give advantages to the enemy who is attacking and detriment to the defenders.  I love this chapter.

So while I didn’t say it much, there is an average of 3 or 4 scenarios per chapter and more than that in some of them.  If you wand to ignore absolutely everything in this book as far as rules and scenarios in concerned, it is still 100% worth it simply for the inspirational ideas you get from looking in the different modeling and hobby articles.  There are a lot of pieces in this book about ideas for terrain and you can really get some great ideas from it.  There is even a small article on building a Motte & Bailey fort for those of you who don’t want to buy the big expensive Warhammer Fortress and still want to give siege and city assault games a try.  I can’t really tell you enough how much anyone who wants to have some great inspiration needs this book so I’ll drop a load of pictures below for you to peruse.  The book can actually be difficult to come by but if you see it for a reasonable price, its well worth it. 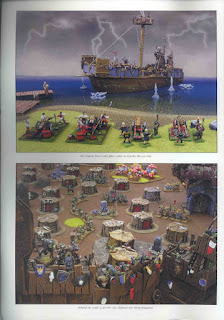 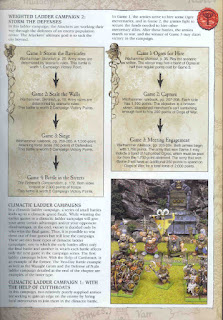 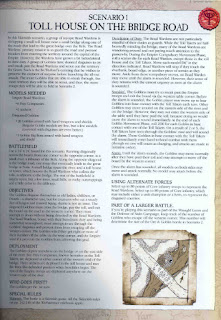 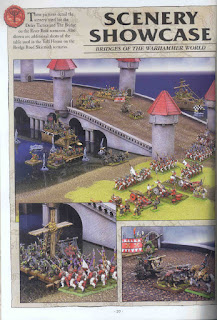 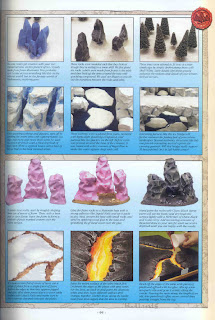 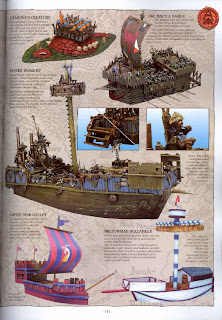 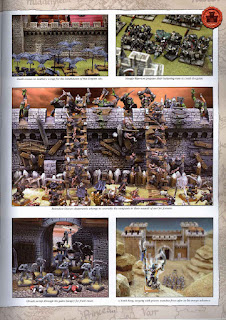 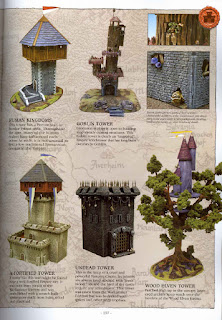