So Extra Life has come and gone.  Well technically it came and went two weeks ago.  However, as I had previous engagements (a wedding) to attend I had to postpone my participation one full week.  Luckily it happened to fall on the same date as Flat-Con.  A Board Game convention in Bloomington, IL.  As it had been a while since I've been off for some Warhammer and Chuck lives in Bloomington, we decided to attend the tournament as well as get up super early on Saturday to start my 24 hour gaming marathon and so we did.  We chose well ahead of time to do some narrative campaigning.  The General's Compendium has a small 3 tier tree campaign set up with a lot of nice narrative and so we decided to play that.  This is the resulting story.

The Worlds Edge Mountains that borders the Chaos Waste is home to both the race of Dwarfs and Skaven.  The Skaven in their constant search for more of the fouls substance known as Warp Stone have always sought to delve deeply into the earth searching and when able have used the already constructed Dwarf miens, many times after lengthy wars with their inhabitants.  Sometimes a particularly greedy Warlord will even seek the precious magical rock on the far side of the mountains ranges in the Chaos Wastes itself.  This is one of those times.

Warlord Snarlsqueek of Clan Skaar and Greyseer Scarclaw have begun to encroach into the Wastes seeking the precious stone.  It isn’t long before they encounter settlement within the foul land in the form of Dwarfs.  Except that unlike the Dwarf’s that they are used to facing these appear to be a corrupt sect who enslave the greenskin race and bend metal to their will while encasing Demons into shells and constructing great machines of death.  An immediate strike would be unwise and the two lords send forth a scouting parting to obtain information about their soon to be enemy.

Knowing that simple slaves would only attempt escape so far from their captors and that regular warriors would be far to nervous to gain any real information the lords choose to send in a group of their elite Stormvermin aided by a small group of Night Runners hired from Clan Eshin.  The scouts had reconnoitered in the borderlands of the Dwarfs gaining valuable intelligence on troop movements, strongholds and defensive positions.  Unfortunately, unaware that it had happened a group of the Dwarfs had spotted them and had been tracking them for some time.  Uncertain as to the strength of the invaders the Dwarfs send a small contingent of their enslaved Hobgoblins ahead of the scouting force to lay in wait in an attempt to entrap and destroy them before they could return to their commanders with the gathered intelligence. 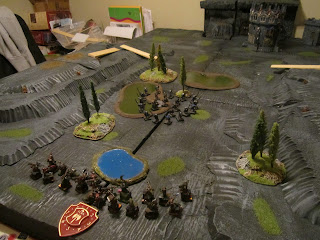 The Hobgoblins burst from a hidden position and with the element of surprise pelt the invades with many sharp things that they had scrounged from their masters.  Knowing that death lay both here and upon their return should they manage it they felt compelled to at least fight for their miserable lives.  The Skaven fought viciously and being better trained and armed they eventually felled the greenskins forcing the few who were not laying dead or dying to rout and return to what would surely be a terrible fate at the hands of their taskmasters.  The Skaven that remained returned to the lords with the information.  They had found a slim pass defended by a lone watchtower the garrison defending it left to watch for enemies, defend against marauding warbands and ward off fell beasts.  The pass beyond leads to a large castle which would surely provide much plunder as well as an excellent stronghold from which to cement their operations in this land. 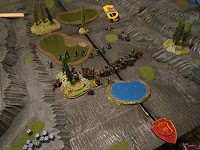 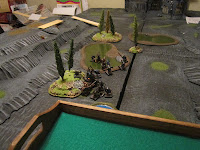 With the knowledge at hand Seer Scarclaw called upon Queek Fellpaw, an Engineer of Clan Skyre who me they had brought with them to tend their machines of war to lead an assault upon the tower and destroy the defenders.  With a group of Clan Skaars warriors and a large force of slaves purchased from Clan Moulder the Engineer went forth also bringing with him some of the great weapons for which his clan is known; a great Warp Lightning Cannon and a fell Warpfire Thrower.  The Skaven were preparing their attack when a messenger was spotted leaving the tower; clearly sent for reinforcements.  Uncertain how they had become aware but very certain he had been betrayed the Engineer launched his attack quickly in hopes that he would control the tower before the enemies allies would arrive. 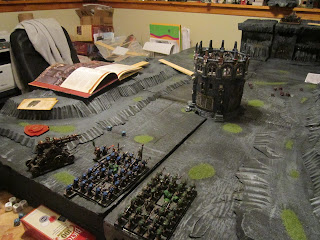 The War Machines bombarded the building setting fire to the foul Dwarfs inside and even as the Cannon blasted great holes in the walls of the tower the Slaves were sent forth to die on the Dwarfs blades in an extra effort to overwhelm the defenders.  The hopes of the Dwarfs were unceremoniously crushed when reinforcements arrived in the form of simple greenskins.  Clearly their messenger had been unable to reach a large enough settlement and had simply found a mine full of Hobgoblins whome he then sent to their deaths.  They came from an unseen direction to sap the foul Cannon but Fellpaw would have none of it.  He turned and with at thrumming of his Warp Energy devices Scorched many of the simple fools to their untimely deaths.  The rest having witnessed such power turned and fled, never to be seen again.  With the outside threat gone the bombardment continued until the tower fell silent.  The Skaven entered the doors to see only corpses left, the charred and broken remains of their enemies a grisly trophy to the Engineers genius. 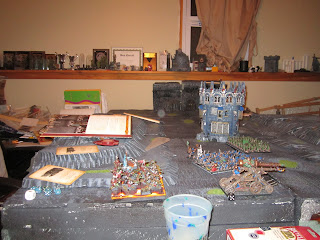 The Skaven having secured a foothold in the enemy lands gather their forces for the battle soon to take place.  Fellpaw requisitioned a second cannon as well as promised a significant amount of warpsotne to Clan Pestilence for aid; without Snarlsqueek’s knowledge he had secured a towering Plague Claw Catapult and the assistance of Plague Priest Bubos and his foul henchmen who brought forth a great Plague Furnace with which to batter the castle walls.  Snarlsqueek bore the great banner of Clan Skaar while Scarpaw brooded over the coming battle.  With a large sum of warp tokens Clan Moulder had sent a great pack of ferocious Rat Ogres to assist and the Skaven constructed a great Battering Ram as well as a Siege Tower with which to assault the enemy’s position.  After surrounding the fortress and starving out the occupants for some time so that they would be weak the assault finally commenced. 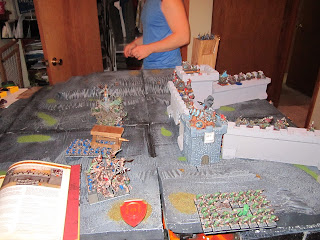 The elite Stormvermin of Clan Skaar pushed their Siege Tower as quickly as their paws could carry them and their skill quickly found them securing the eastern wall of the stronghold.  The Plague Furnace and Battering Ram surged forward to begin pummeling the walls while the artillery batteries far beyond the Dwarfs reach fired at the defenders atop the walls.  Seer Scarpaw twitched strongly from the copious amounts of warpstone snuff he had been snorting and after a few warpstone tokens it is rumored he was gifted by the Great Horned One with a second sight.  Clearly seeing the threat just beyond the door of the gatehouse he raised his furry, gnarled paw and chanted words of devious intent.  A rift appeared in the ground and ran under the main wall shaking its foundations so strongly that many of the Dwarf defenders atop fell to their deaths from the parapets.  More importantly it was learned later that the hand of The Great Horned One himself reached from the great crack and dragged a foul K’daai Destroyer in the castle courtyard into the bowels of the earth. 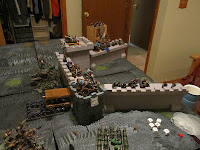 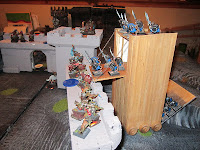 The Dwarfs did what they could to stop the Skaven, their cannons belching great gouts of flame into the Rat Ogres and their great metal Rockets whizzing into the Battering Ram but it would not be enough.  The Rat Ogres scaled the northwest tower and smashed the Magma Cannon to pieces.  The few enemies left in the gatehouse tried to stop the Rat Ogres but failed.  Scarpaw, seeing both the enemy Battle Standard Bearer and General atop the wall used all his faith, devotion and the last of his warp snuff to call once more upon the Horned One’s intervention.  A dark cloud appeared as the fabric of reality bent and the screams of Dwarfs echoed out as they fell to the ground writhing in horrible mutation and as the screams died away more Skaven took their place on the wall.  The Stormvermin took the northeast tower and sapped the Deathshrieker Rocket Launcher leaving only a small grouping of Hobgoblins on the western wall who, now lacking their former masters would soon find themselves enslaved by the Skaven. 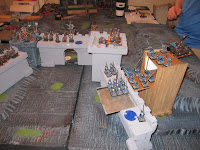 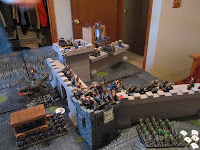 The Skaven having completely destroyed the borderlands defenders now have a firm foothold in the lands of the Chaos Wastes.  Weakened the Chaos Dwarfs are forced to deal with a continued threat as the Skaven now have a place to continue their press into foreign territory in search of the great magical rocks they so desire.
Posted by Joe Flesch at 3:19 PM