Hooray extra life is over for me this year and with it a great day of binge gaming.  If your keeping up with the blog you've probably already seen the post about Chuck and I's mini narrative campaign that we played early in the morning of Saturday the 27th.  Just in case you haven't though I've included the link here: Mini Narrative Campaign.  After that, some coffee, breakfast and showers we paraded ourselves to the Mini Expo building at the Interstate Center for Flat Con.  Traditionally Flat Con is a board game convention; however the interstate center is pretty large and there is plenty of table space so there are usually a couple of tournaments there for both Fantasy and 40k.

Our friend Kevin Flemming ran the fantasy event this year at 1,000 points and 3 rounds.  He also stepped in as ringer with his Dwarf army as we we're 1 player short of 8.  The participants names and armies are below.  Not pictured are my own Skaven army and Kevin's Dwarfs.

So the games commenced and first up for me was: 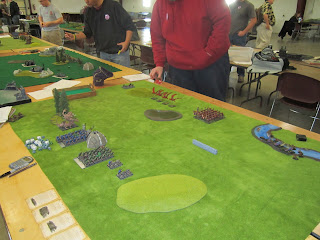 His list contained 5 Chameleon Skinks, a pack of 3 Salamanders, 4 Terradons, probably 25 Saurus, and an Old Blood.  He almost took down my Abomination in the first couple turns through poinson; I couldn't make regeneration saves for anything.  Eventually though it got the charge on the Skinks killing them.  My Giant Rats diverted his models as long as they could while the Salamanders torched my Slaves down to almost nothing.  I finished the Terradons and the game with a 12-8 win. 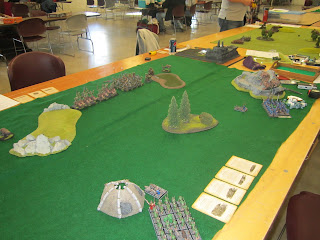 Brandons list had 2 units of 5 Savagte Orc Boar Boys, a unit of roughly 30 Savage Big 'Un's, 2 seperate River Trolls, 2 Mangler Squigs and a Level 3.  Dawn attack saw us both with a scattered deployment.  My Giant Rats and Gutter Runners took out the Manglers while the Seer took down 1 troll.  The Boar Boys also went down to the Gutter Runners.  The big block got to the Abom but failed to wound him enough to take him out.  Then when we though he would really go down as a Troll came in my dice went on fire winning the combat, biting the Troll's head off and Thunderstomping 6 Orcs.  I won combat and ran down the Savage Orc Big 'Un's winning 20-0. 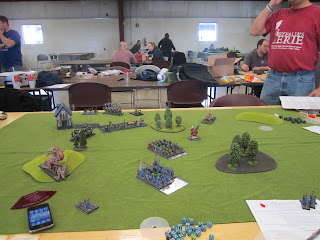 Steve had a big unit of about 30 Night Goblins with Short Bows, 2 units of 10 Black Orcs, 2 Manglers, 1 Doom Diver, Wolf Chariot, BSB, Black Orc Boss and a Level 2 Goblin Shaman.  My Engineer and Giant Rats stepped on the Manglers but not before they went through my Slaves and Abom.  The Gutters went down distracting some Black Orcs and the Slaves eventually got Death Frenzied to kill the Chariot in their flank.  I slowly Scorched and Warp Lightninged the Night Goblins down.  Steve's Doom Diver, Magic and Shooting took the Clanrats down to nearly nothing along with my own miscasts.  I used the Dreaded 13th to turn both units of Black Orcs, BSB and Black Orc Boss into more of my own Clanrats.  At the games end it was a 10-10 draw.

Overall it was enough to see me get Best Overall.  Chuck pulled of Best Sports, Aaron Lacey, Best General and Brandon Prouty went home with Best Appearance.  A great little 3 round tournament.

Chuck obviuosly was also in attendance and you can read his blog post over on his blog here: Chucks Blogspot 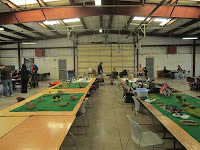 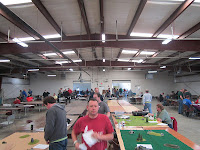 Afterward I stuck around to get in some serious boardgaming.  You can see a couple pictures above here of the inside of the interstate center.  Lots of room.  I sat down to a game of Super Dungeon Explore which, while I think is an okay game I also think it was seriously bugged.  Just like a video game its based after.  Although it goes against my usual moral I quit the game after 3-1/2 hours.  I had a desire to play other games before leaving for the night.  About an hour after I finished Brandon came by the game of Kingsburg I was playing to let me know they'd finally finished.  I ran into a couple of friends from Adepticon who were there for board games and I beat them in Kingsburg by a very close 4 points.  I finished the night up with some excellent mexican food and some games of Elder Sign from FFG.

Overall Flat Con I think represents a lot of promise for me in the future.  Chuck and I are discussing attempting to kick up a 20-30 player GT there next year.  Midwest Rampage used the venue in the past and with as much room as is available here I see absolutely no reason why we couldn't be successful in such.  The Lincoln Waaagh (play off of Land of Lincoln slogan for Illinois) has a nice ring to it doesn't it?  You'll have to keep your eyes and ears open for the possibility of that in the future.  Closing the blog post I'll say that I personally raised around $200+ for the Children's Miracle Network.  Team Cranky together raised over $6,000 for charity in total and in no small part thanks to Andrew Sherman and Dave Witek.  As another great note Extra Life in total raised over $2 million dollars this year which is a fantastic record breaking score for them.  We fully plan on participating again next year and can't wait.