So now that BiTS II is over with, and I've had my vacation (or work-cation) depending on how you look at taking your son to his boyscout camp for a week is considered I'm ready to get moving on the Empire again.  For 1,500 points I really wanted to add a unit of Knights as well as the rest of the Flagellant unit to the army but as I haven't been able to procure horses for the old style Knights Panther and I doubt after the vacation I'll actually have time to paint up 14 Flagellants,  I'm moving on to other pastures with different ideas.

So I'm doubling up the artillery.  Lets face it, when this list hits 2,500 I'm going to want the 2nd cannon.  The 2nd Hellblaster I think will probably turn into a 'diminishing returns' item, but I figured I'd put it together and see how it goes.  Then I thought about this... 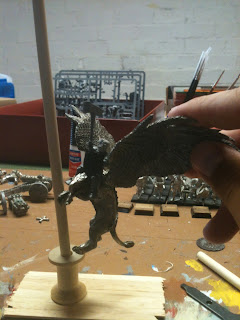 Yes, I know that at 1,500 a Lord may be just a bit overkill, but hey; he definitely eats up the 500 points I need for the month.  LOL!  Also, how good could a Gryphon be against Ogres.  I don't get the Thunderstomp which is what makes monsters so good int his edition in my opinion.  Of course, he is still a big killing flying thing.  Something that is purely offensive which is what the army I think lacks in general.  Another reason I'd wanted to add the Knights.

Of course I'm sticking with the old style models which means my Gryphon is significantly smaller than the new edition model.  To bulk him up I'm going to have him hanging off of a mast on the boat display base.  I'll add some smaller pieces to the base as well so that it doesn't look so barren.  The original rider for this Gryphon looks like garbage and I didn't strip him originally so I've turned a regular knight into a rider.  I've magnetized his arms to wield either a great weapon or a lance.

I'm not really sure what I'm going to do for the lists, but at least I have options.  My starting intent will be to add a Great Cannon, Hellblaster, Captain of The Empire (BSB), and 10 more Flagellants.  If I can't get those done or it looks hopeless maybe I'll do the Gryphon.  We'll have to see.
Posted by Joe Flesch at 12:54 PM