So Ryan and I got together again tonight to play yet another 1,500 point game.  Well, 1,600 actually in practice for our Bloomington Tournament that's coming up at the end of August.  Ryan changed his list slightly and I made some sweeping changes to mine as detailed in the previous post.  We rolled up 'Meeting Engagement' and I chose a corner and deployed first also going first as Ryan failed to steal the initiative.  The only thing starting off board at all was Ryan's Firebelly. 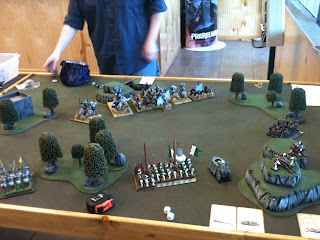 You can see the basic setup here.  Pretty much a straight setup across from each other.  I had hoped my Knights might get a flanking position at some point but as you'll see later that didn't work out at all.  I moved up very slightly on our 1st turn to the point where if Ryan charged they would be very long charges and unlikely to succeed.  On turn 2 after Ryan moved forward I chose to try and make a lot of charges.  None of them were really in my "favor" but it was an issue of I charge now or I definitely get charged next turn so I tried.  As you'll see below I didn't make a single one.  Even worse is that Ryan got Flame Cage off on my Flagellants and torched 18 out of the 24 when they failed their Frenzy check and failed their charge.  It was a serious blow to the army. 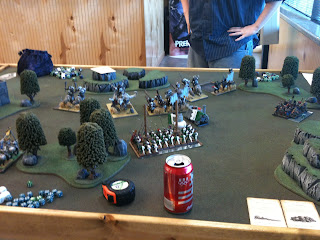 The Steam Tank only failed its charge by 2" which really sucked as that's when the tank does most of its damage is impact.  The Flagellants even though they look full there are down to 7 models.  I just didn't have it in me to remove the models from their tray as I knew they would be dead very shortly.  On Ryan's next turn he makes all the obvious charges.  The Mournfang on the left hit and run the unit of Knights off the table.  The Ogre's with Firebelly finish the Flagellants and the Stonehorn hits the Spears while the Ironguts hit the Tank.  Shockingly the Stonehorn loses combat by one and runs but due to Flamecage now being on my Spearmen I elect not to pursue. 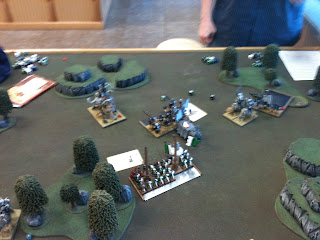 In the end the Tank dies, both Mournfang end up in the flanks and the Ironguts come in with the rallied Stonehorn to finish the game.  Flamecage was cast again on the Spears making any real movement impossible for me.  It was a really interesting game in a couple ways which we'll discuss shortly.  The end result here is me getting tabled at 1,600 with what seemed like very little effort on Ryan's part.  Good for him. 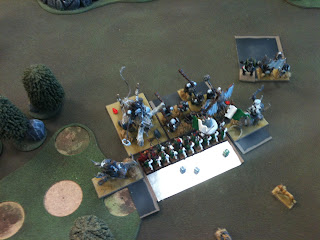 Take Away:
So I would've liked to see the Tank perform better.  I know it isn't really a big monster that is going to go win combats on its own.  It needs support which I tried to do when I dual charged it and the Spears into Ryan's Guts but missed the numbers.  I also rolled pretty poorly on its armor saves; that said it was not a shining display of its ability.  The Knights did squat this game; partly because they didn't get a charge off which is necessary if they hope to break anything with armor but also because I'm stupid.  I had them set up in a 4x2 formation where if I'd had them 5 wide I would've been Steadfast for at least a round or two.  My own mistake there.  The worst part of this game for me was definitely the Flamecage.  It was a funny opposite of our last game where my Mindrazor totally kept me in the game where in this game Flamecage completely controlled my army.  It destroyed my hittiest unit in my Flagellants and utterly made my Spears stand still from turn two on until I lost.  It was terrible.  I'd like to say having a Scroll would've helped but 2 of the 3 times Ryan cast it, was on Irresistible so there's really nothing you can do about it.

I'm going to try the Tank again.  I have to, I can't just call it based on one outing where it hit the worst matchup for it in the Ironguts.  Not to mention the fact that Ogres seem to just in general be a hard match for the Empire.  Well, they are a hard match for most armies, but for me it seems especially.  In August when Ryan and I hit 2,000 the Knights will be 10 strong which will hopefully keep them moving longer and perhaps I'll learn to use the Tank to its effectiveness.  Practice, practice, practice...
Posted by Joe Flesch at 10:24 PM