So Ryan and I got together for a game sooner than I'd planned.  I decided on a list for the month although I doubt I'll actually accomplish painting it in the 1 month limit.

I can't quite remember what he had for certain, but...

We played Dawn Attack which didn't really effect either of us very much.  Facing off from left to left were going to be my Flagellants against his Stonehorn and Sabretusk's.  Centerline was my Volley Gun, Handguns, Cannon, Spears, Knights and characters against the rest of Ryans army. 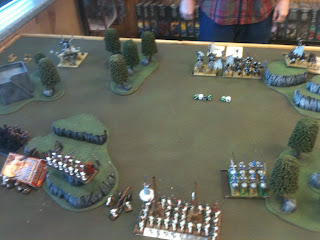 I went first based from scenario and Ryan not stealing the initiative.  Flagellants moved forward, Knights moved forward and nothing else special.  Ryans turn the Stonehorn failed a charge on the Flagellants, everything else moved forward.  Turn two the Flagellants made the super charge to hit the Stonehorn which they broke and ran down.  The Knights tried for the Mournfang but failed.  I threw a big fireball at the Mournfang killing one and shot the other off with the Hellblaster.  The Cannon didn't hit a damned thing. 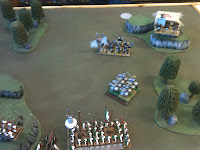 The Knights were way out of place now giving Ryan a superb flank on them which he took.  He also threw a Flame Vortex into the Spears with Irresistible Force.  Luckily for me it scattered off harmlessly, and unlucky for him his wizard lost all his levels giving me the definite magic supremacy.  I fled with the Knights and bounced through my Spears stopping just at the board edge but leaving Ryan with a failed charge. 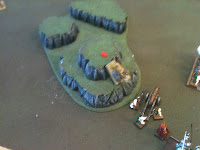 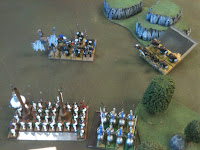 Over the next couple turns some crazsiness happend out on the left.  I stepped my Fire Wizard out to kill the Sabretusks.  I failed.  The cats then killed my Volley Gun, Engineer, Handguns and nearly got the Wizard too.  It was terrible.  Meanwhile my Knights rallied and everything had to take the time to rearrange.  Ryan had more than enough time to engage at this point, but I'd been having huge magic phases and getting Mindrazor off on the big block of Spears thus convincing Ryan not to charge them.  I as the Knights got back into position I began charging (and failing I might add) myself.  My cannon also finally Grapeshotted the last Sabretusk off. 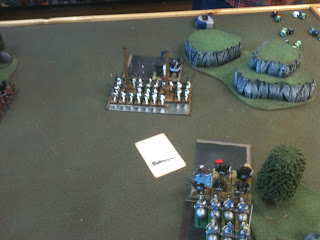 Ryan chose to after hit the Knights with his Ogres after my Spears failed a charge and getting themselves out of the flank arc from where Ryan would end up in combat.  The Knights 1+ save managed to hold them steady for 3 rounds of combat.  I did finally make a charge with Mindrazor still up.  I killed all but the Champion.  Ryan in turned killed my Priest and Shadow wizard but still lost combat and with it his BSB.  I however missed the run down by 1" leaving him alive.  At the bottom of 6 the Knights broke from combat and were ran down on a terrible flee thus securing Ryan the victory by a margin of 148 points.  Had the Knights not broken or the Spears successfully caught the Gut unit it would've been an Empire victory.

Takeaway:
Flagellants are a definite in the list.  Yes, they are frenzied and can be led about, but they also pack a serious amount of hitting power.  True they only killed one thing, but it was nearly equal points.  I was very surprised at the Knights resilience.  I expected them to disappear after any combat in which they didn't charge, but that 1+ really kept them around for quite a while.  In fact, Ryan only ever killed 2 of the 8 before running them down and that was over I think 5 rounds of combat.  Of course they were only fighting regular Ogres but still.  Mindrazor did its job securing my the biggest amount of damage and what would have been the win with a better pursuit roll.  I hate to depend on it, but until I build the things with bigger teeth (Steam Tank, Gryphon, Greatswords) this list will depend heavily on the luck of spells holding it.  Even at higher points I'll still be depending heavily on magic to make it effective.  Still I'm satisfied with where its going.

Thanks for the fun game. I was hopeing to get a little more use out of the firebelly, but he only got 1 spell off. My cats were amazing and completely got their points back and more. They gave me the win for sure. I learned to keep the dispell scroll for the midrazor and not protect a cat. LOL. Get game and good times.

His BSB was killed. Quote "Ryan in turned killed my Priest and Shadow wizard but still lost combat and with it his BSB." I failed to catch the last guy in the unit or his Firebelly though.

I would like to get more pics of the spearmen, the white and green look great!