So Ryan and I meet on the field of battle yet again!  I trudged the same list as previous with little to no alteration while Ryan changed his up for some entertainment value and dropped a Mournfang and some other misc. for 2 Giants.  Good times were ahead! 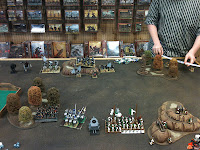 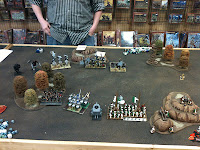 Turns 1 and two saw very little action from either side.  We both moved forward conservatively.  I fire balled one of the Sabertusk's to death hoping to avoid the usual death of my War Machines. 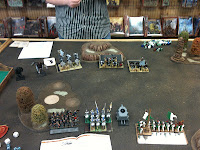 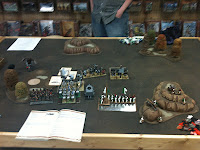 From their though things began happening quick.  I wickedly threw 6 dice at a Pit of Shades on Ryan's Ironguts, only to suck myself and 17 Spearmen into the warp and only take down 3 Ogres as Ryan made an intolerable amount of 1's to save them.  His Mournfangs made a charge on my Knights and I shockingly held fast to get my Flagellants into his flank next turn.  Sadly a Stubborn spell would see them remain in combat to the far future of the game while the Giants would come in to assist. 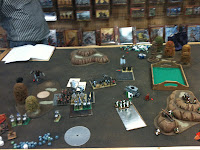 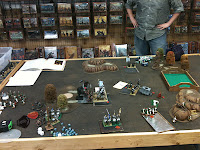 Ryan became his own worst enemy with the 2 Giants on combat.  He kept rolling Yell and Bawl which would end combat and leave the Flagellants alive to hold him in place yet another Round!  They also killed 1 of the 2 Giants. The Knights broke and ran back but rallied later, the Hellheart then exploded another 12 Spearmen from the Warrior Priest (yes this was a incorrect rules play, but oh well).  They panicked, rallied and would later die.  The Steam Tank got his charge off this game and slagged the regular Ogres quickly.  The Ironguts then charged but failed multiple fear tests in a row doing only 2 wounds to it over 2 turns of combat. 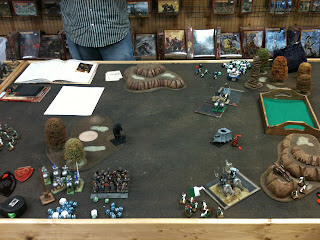 The Knights eventually charge into the flank of the Irongut/Steam Tank combat to ensure that the Guts are wiped and then ran down.  The Mournfang charge and kill the Spear unit and run off the table in pursuit.  The remaining 2 regular Ogres charge the remaining 2 Knights and although they win combat I hold.  The game ends in a 61 point difference in Ryan's favor.  A draw!  I know could manage it eventually!

Take Away:
So from this game I take away some new thoughts.  Flagellants are still awesome.  Warrior Priests don't miscast.  Ever.  The Steam Tank is amazing; but with the caveat that it is only so if it charges and it certainly doesn't hurt if the opponent fails their Fear test.  The turn I charged I did 11 wounds to the Irongut unit.  It was hot.  Magic was pretty ho-hum for both of us I think.  It did not make this game.  I also believe that had I not lost 12 guys to the Warrior Priest Miscast debacle the unit would have been large enough to have survived the Mournfang combat at the end and be Steadfast.  Could have made the win.  I am still satisfied with the direction the army is going.  I'm learning some basics of unit placement which is critically necessary for this army to have any hope of success.  Still I am hopeful for it.  At 2k I'll be increasing the Knights as well as adding a Warrior Priest to them to give them more hitting power and likely be upgrading one of my Wizards to a Lord.  It should be very interesting.