For July I finished up my other two mournfang to round out the unit to four. 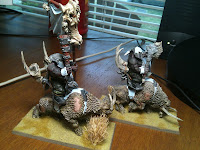 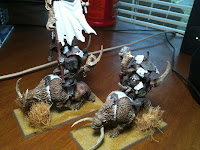 Mournfang completely live up to the hype. They are awesome! I have been having a fun time running these guys around the table. They are not unbeatable though. Tough 4 and Armour 2+ goes a long way, but not far enough. You still gotta be careful with them, but once they get into combat, they stand a good chance against most units.

My game with Joe ended as a win for me, but not sure how it really happened. I really owe it all to my 2 Sabertusks which killed a Volly gun, Engineer, and 12 Han﻿dgunner. I spent most of the rest of the game backing away from Joe's spearmen horde because he kept getting Mindrazor off on them. I thought eventually I would be able to stop a casting of it, but never did, and his spears finally trounced my Ironguts. However, because I spent most of the game running, he did not get very many other points, and I squeaked out a win.
I would like to review my first go with the Firebelly, but he miscast on his first spell and lost all of his wizard levels. He did get to use his breath weapon in a challenge with the battle priest and kill him before the rest of the unit went, thanks to the Sigil Sword, and took away their hatred. That saved one Irongut left and preserved the points of the unit.
I am liking Joe's empire, but I agree that he is too magic reliant at this time and needs to get some hammers into his army. 2000 should be an interesting battle.
Cheers,
Ryan G
Posted by Ryang19 at 9:22 PM