So yesterday, on the 25th of February my army rolled out for its first three 2,500 point games in a small 1 day 3 round tournament event here at my local gamestore.  All told, 16 players drug themselves out for it giving me a nice sized field to test the list against for the final month of our list building.  Quite convenient that the tournament coincided with the end of our building of the armies.  Ryan also played with his Ogres (although they aren't finished) and hopefully I'll talk him into posting some reports about his experiences.

For my first game I was strung up against John Wanger and his Dark Elves! 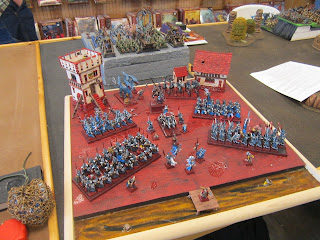 He was toting a horde of Executioners and Black Guard along with some Spears, RXB's, Hydra, Cauldron and other small stuff.

I know John from the northern Illinois tournament scene and I've seen this list before.  It is effective to say the least.  I have no clue how it works overall, the little intricacies of it, but I knew it wouldn't be easy.  I also have no idea how to run my Skaven list while John has been running this one for quite a while.  It boils down in the end to superior knowledge, play and strategy on John's part.  I couldn't get things where I wanted and John knew exactly what he was doing.  My dice were pretty poor in this game which didn't help.  After 4 rounds of combat with the Hydra I had only done 1 wound which is a god awful amount of regen saves on the Hydra.  My magic was negligible having never really gotten a phase with better than 5 dice and my WLC literally never hitting a single damned thing.  John smashed my face in 2,100 to 200.  It was brutal.

I'm not sure what I could've done better either which is the sad part.  In most places things in this game just didn't work.  Doom Rocket missed, Brass Orb deviated, like I said WLC's couldn't hit and magic did nothing.  Just a rough game.  I did learn a few things about his list though such as to avoid the damned Executioner block because of the combo's he runs in the list.

Game 2!
For game 2 I went for Kevin Flemmings Vampire Counts! 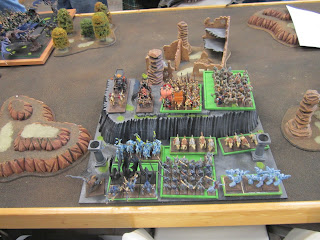 Kevin as well as another VC player were toting quite a bit of the new stuff, here were 6 Crypt Horrors, some Dogs, Zombies, Ghouls, Skeletons, Spirit Hosts, basically a mixed bag of everything.

We played Dawn Attack.  I won.  That should be enough said, but basically Kevin's General ended up on the far left of his zone.  While most of his stuff was with it the stuff that ended up on the far right was basically lost the whole game attempting to do its 4" march.  This game, most things went right.  The WLC's still did nothing but kill a single Banshee and I never got a chance to throw the Brass Orb, but the Doom Rocket killed a Crypt Horror and the Abomination slaughtered a lot!  It killed Wolves, overran into Spirit Hosts (Yay warpstone upgrade), then overran into Crypt Horrors.  Finally it turned around and him along with my Plague Furnace unit smashed into his Generals Skeleton bunker doing enough combat resolution to completely pop it all.  At that point we called it.  This time I delivered the smashing at 2,500 to 195.

Game 3!
For the final game I face off against Jeff Tupper and his High Elves! 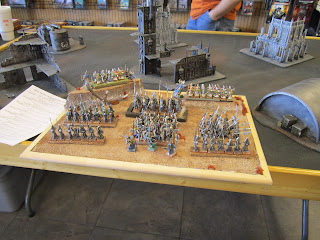 Tupper had a pretty magic-centric list.  A level 4, level 2, Banner of Sorcery, a couple Archer units, Sea Guard.  He went for Lore of Life but for my luck he did not get either Flesh to Stone or Regrowth which were the two spells that he really wanted.

This was the corner deploy scenario and I feel like I had Tupper on the back foot most of the game.  The Storm Banner activated on the 2nd half of turn 1 and literally kept on humming along through the bottom of Turn 4 almost completely negating all of Tuppers shooting through almost the whole game.  He miscast with his level 2 losing his levels and I put heavy pressure onto everything else.  The Abomination amazingly survived considering he never moved over 9 inches the entire game.  I 13'th spelled a unit of Swordmasters into Clanrats and did a lot of damage over time through my magic.  The Doom Rocket/Orb did nothing and the WLC's again failed me utterly.  Tupper upon realizing the game was lost began to flee from charges and preserve points.  The game ended in a draw with a single Swordmaster preserving 100 points and 4 models left out of a Phoenix Guard unit holding down about 300 points.  I was severely disappointed with my inability to catch them and seal the deal.  Points we're like 870 to 815 or so.  What did I learn?  I'm not even sure.

Overall take-away?
Overall, I've learned that the Weapons Teams really are just crap.  Yes, they tend to take your opponents attention for a turn of shooting which is nice, but for the points they just don't do enough to justify there cost.  The Giant Rats seem to nearly be a waste of points but they did a couple of times cause some re-direction and for only 23 points its not a big expenditure.

I think the Brass Orb may be too situational.  I literally only used it once and in 2 of my games it was basically nullified by playing against Elves and their brutally high initiative.

The net lists prose the blessings of multiple large (40ish and up) Slave blocks.  I wanted to avoid that, but I have to admit I see the point now.  I had 4 blocks but with an inability of them to win combats because of lackluster stats the more blocks means that its more likely for you to get the flanks or continually tar pit things.  It makes me sad.

I think the obvious drop swill be the Weapons Teams and probably Brass Orb.  From there I can perhaps turn the Stormvermin into Clanrats.  With the scrapped points I will look at putting in some other units that might be useful.  I still hate to look into more Slaves (mostly because of not wanting to assemble/paint another 100+ rats).  I think the first things I'll look at is probably Rat Ogres (I know there a poor choice, but I'd like to try 'em) and then probably Jezzail's just to give me a bit of shooting to try and finish off those little units of 1 or 4 guys preserving their points at the end of the game.  Certainly their long range should help in this respect.

I need to learn how to best utilize the Plague Furnace unit.  I have no idea how to set up ideal match-ups and its so large that its unwieldy to get to where you want it without some serious for-thought.  The Skaven are strong, particularly when there stuff works (sadly only like 1/2 the time) but they definitely are not a point/click/win army.
Posted by Joe Flesch at 8:39 AM

nice showing down there joe!