Are you ready for some Blood Bowl!!!! 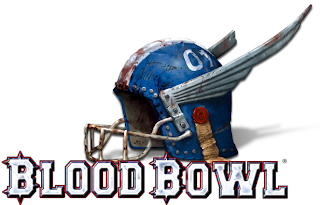 So a short time ago I finally purchased Blood Bowl for the PC.  Honestly I'd been wanting to do this since the game came out way back in 09 but held off due to the myriad of other things I do constantly in the hobby.  Getting engrossed into another video game didn't seem like a good idea.
That said, I'm really quite pleased I waited.  Since the original release there have been numerous updates to the system, least of which is the update for the LRB 6.0 rules system.  To get the most up-to-date version your going to have to go PC instead of console and you'll have to go after the Legendary Edition.

This version of the game is available for download directly from the Cyanide games website for it or from Steam.  Both links are provided here:
From Cyanide Studio's
From Steam

Both are viable places to get the game and for the same price.  Steam requires the download and installation of an extra application to run everything through but Steam also will put the game on sale every couple of months for around $8.99 USD.  Let me tell you, best $8.99 ever!
The Legendary Edition contains every GW Blood Bowl team except for Chaos Dwarf's for who knows what reason.  It runs the LRB 6.0 Competition Rules.  Its amazing.

I've had the game for less than a week and I've played more games in the last 3 days than in the last year previous.  Not only that; but it took me all of 2 days to form up a special interest 10 player league for on-line play.

Clearly, I am excited.  Expect to hear more about Blood Bowl in the coming months.
Posted by Joe Flesch at 8:48 PM