So Ryan and I finally got our 1k game in the other day for our little Tale of Two Gamers.  We managed to squeeze in two games which was great, but the reason we did is because the 1st game was over just that fast!


Game 1 was Dawn Attack.  You can see in the picture below pretty much the setup, although Ryan had already made his first moves in the pic and my cannon had already blown up.  I took Shadow Magic but my shooting was quite ineffective in this game.  The Magic also did very little for me. 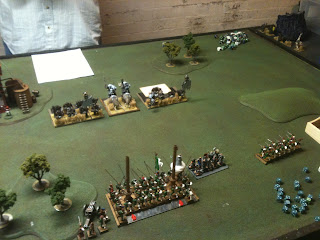 Ryan made a couple of long charges here which basically blew the game up.  He also had a Gorger not that it mattered much.  The 2nd picture was halfway through Ryan’s turn showing his charges.  He also moved that other Ogre unit up to block my Flagellants from getting a flank on the Mournfang should the Spears not break.  Well, the Spears broke, and at that point everything basically disappeared from the table except my Handgunners which obviously weren't going to win the game. 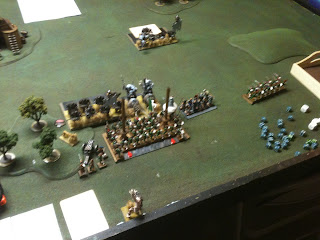 Our second game we got Watchtower.  Again you see the picture below Ryan and I had both started moving before I remembered the camera.  Oops...  I took Lore of Metal for this game and again it was pretty ineffective.  I did get Plague of Rust off on his Generals unit twice completely eliminating his Armor Save.  Also what isn't in the picture is the Mournfang who were right in front of the Flagellants but my Volley Gun rocked on fire and out of 20 shots killed the two of them in one round. 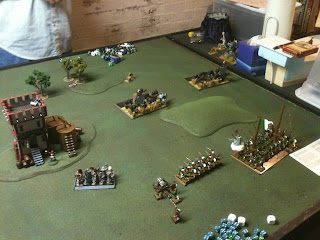 In the 2nd picture here you see what will basically be the primary combat of the game.  I made a long charge with the Flagellants and they did some good damage, but died and gave Ryan the free reform to face the flank of my Spears so that he would get a super charge off.  My mistake.  He does get the charge off and slaughter I think 16 of the Spears who then broke.  Luckily he only pursued with one unit and I managed to survive.  His Generals unit turned to go and collect the Handguns and Volley Gun. 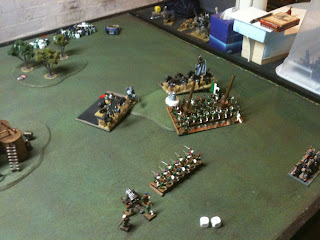 Much to his chagrin the Volley Gun turned his Generals unit into dust which was great for me!  My Spears rallied and reformed a bit to receive yet another charge and my Handguns turned to face his last unit on the board.  The rest of the combat was ineffectual.  He killed some, I did a wound here or there, managed to be Steadfast for a round.  Turns 5 and 6 I moved my Engineer off into the tower which is what technically gives me the victory here.  I don't know what VP's would've brought it too, but a loss and a win seemed good to me. 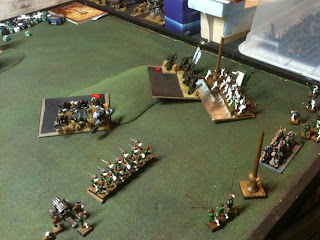 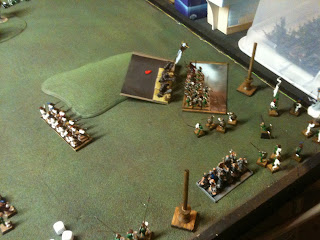 So, what did I take away from thesee games?
Well, I'm terribly disappointed in my Handguns.  I knew a unit of 10 wouldn't achieve anything, but I had hoped adding the extra 4 guys would have made it at least a little useful but it has consistently underperformed in all 3 games I've used it.  The Volley Gun did absolutely nothing in game 1, partly because Ryan got a turn 2 charge on it with a Sabretusk.  In game 2 it completed destroyed the Mournfang and a unit of 5 Ogres and a Bruiser.  Mind you it had an Engineer on it that increases its cost from 120 to 185 in essence, but damn it was hot in that 2nd game.

The cannon is obviously good, and the Warrior Priest got a lot of his prayers off over the games which made him nice.  Oddly the 10 Flagellants were pretty cool.  They put out a ton of damage, of course they only ever last 1 round, but still the turn around is impressive.  The Spears/Magic was a failure at this level.  I kind of expected that though.  The list I'm working on is built around some kind of good Augment Spells making the Spear unit into a combat block which it isn't naturally.  With only a level 2 both games I was hoping to get spells that would help me, but both games I did not get those spells.  I'm hoping that at level 4 I'll get more spells to help me solidify what’s happening to them and make them much more vicious.  I know they aren't much of a combat block on their own, but they are what they are and if I somehow can't make it work at some point then it seems the list may be relegated to fun/friendly games and never see a tournament.

I had good fun, playing at 1k, but I think the Empire is missing a lot at low points that it needs to deal with Ogres.  Too many attacks at high strength and I can't manage to wound him for anything in hand to hand.  At 1,500 in July I'll be looking at adding more punch.  Either by bringing up the Flagellant unit or adding the Knight unit which I'd like to get in, but I'm not sure I will be able to by the end of July.  We'll have to just wait and see what I manage.