So for Blood in The Sun which is coming up shortly here in just 3 weeks.  BiTS has a lot of bonus points/awards, and things you can get for doing stuff.  One of the things you can do is build a piece of terrain for the terrain contest.  Just for participating you get a re-roll token, but as it's a contest I have to also assume there is a prize perhaps associated with it.  As such I've decided to do a small write-up on the piece I'm building.

The Dwarf Brewhouse
I chose the brewhouse because... well frankly I like my Dwarf army.  Also it's rules are pretty good.  Any unit within 6" is both Immune to Psychology and Stubborn.  Dwarf units within 6" are so fanatically defensive of it that they become unbreakable.  They must also pass a LD test at -3 to move away from 6" of it.  They just refuse to give up their ale. 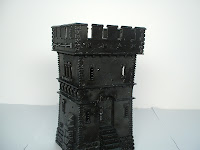 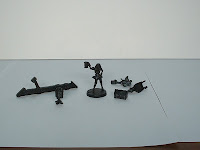 First I began with the only piece of terrain I didn't have built.  A Games Workshop tower.  I have to say that the GW plastic terrain kits go together extremely well as I've never built one before.  I grabbed a bunch of extra bits to add to it.  A Barmaid who I got as a cheerleader for my Human Blood Bowl team but never painted.  I took a gun off of the tower kit and replaced it with a telescope.  Nothing like some star gazing when your drunk.  A wheelbarrow, a chest, a cage of burning coals.  Plenty of extra little bits to add flavor. 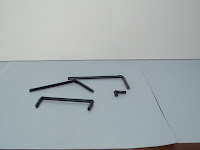 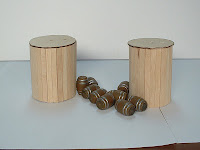 The pipes are Plastruct tubes that I heated a little with a lighter until I could bend the elbows required.  The two large tanks of beer I made from wood slat flooring for dollhouses.  The smaller barrels I actually acquired from an old display board I had. 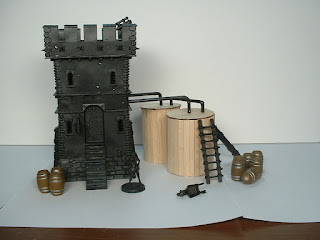 Here is the basic assembly.  The two large beer tanks will be feeding beer into the tower through the pipes.  I'm going to add a small spicket on the side of one of the large tanks to fill up the barrels.  The wheelbarrow will probably have a barrel in it by the end.  You can hardly see the telescope up top but its there.  A ladder, the barmaid.  It'll be pretty good when I'm done.  As long as I don't jack up the paintjob that is.  I'm pretty excited to get to painting this bad boy.
Posted by Joe Flesch at 6:37 PM