Well here I am after having a long weekend of Warhammer fun.  I’m going to take the opportunity to go over the list and the games I played, etc…  The usual things you’d expect to read from this kind of post.  Towards the bottom I’ll of course link the audio and video that I cobbled together whilst I was at the tournament and without further ado.

So the list…  It is a dirty list, though not nearly as dirty as it could’ve been.  I took Champ in Slaves to make up points and same with the Champ in the Stormvermin as well as the Warpfire Thrower.  I literally struggled to get the 600 required for the core choice at 2,400.  I could have turned a unit into Clanrats, but ended up going Stormvermin and gave it a whirl. 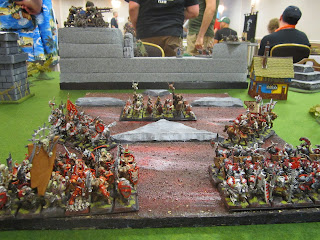 Joe had some Khorne Knights, Khorne Warriors, a unit of Nurgle Warriors, and characters.  His army was pretty much designed to get up on you and kill you in combat which isn’t unusual for Warriors at all, especially when you go Khorne.  The game really was I think going his way, both my Slave units had disappeared, Abom was dead, Plague Monks had been killed along with the furnace and the Stormvermin had literally been backed into a corner, but through some magic I had his army down to 2 Khorne warriors in 1 unit and 9 plus his BSB and Lord in another.  Final turn I charged my Stormvermin at the 2 certain they would win and although I felt dirty afterwards for it I used the 13th spell and rolled just what was needed to take off his other unit with his Lord and BSB in it securing me a victory by tabling for a 20-0 win.  Joe is a great opponent and it was a super fun game. 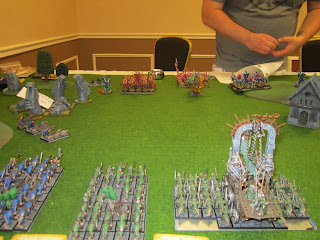 Mikes list had some single Fiends, and then 1 of each Bloodletters, Horrors and Demonettes, a Great Unclean One and other such Demonic things.  I concentrated all my shooting and magic onto his Bloodletters who did eventually disappear.  The GUO ended up in a Slave unit which steadfasted their way through the rest of the game even getting him down to 1 wound a number of times, but as Mike was running Lore of Life he kept bringing him back up and I never quite finished him off.  The Abomination and another Slave unit fought and killed the Demonettes and the rest of the game was very stand-offish.  At the very end of the game I threw 13th at the Horrors and Dimensional Cascaeded.  This turns out to be one of my biggest regrets of the touranment.  BiTS was running a Bingo card for prizes which you would get if you marked things off of your card and 1 of the boxes was cascade yourself.  I was so excited to tick off the box I didn’t think about re-rolling the result with the Earthing Rod.  This not only gave Mike the win in the game but also the bonus points for breaking my own fortitude.  After I realized this an hour or so later I was just gutted and really cursing myself for suffering the 11-9 loss.  Had I not given him the 300 point Greyseer I would have either won or we would’ve drawn, I’m not 100 sure, but I know I wouldn’t have lost. 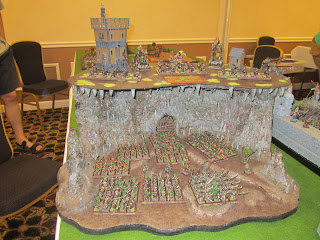 I figured I’d end up fighting another Skaven at some point, I just wish it hadn’t been Brad’s.  I make no excuses for my list not being dirty, but Brad’s was dirtier in my opinion.  I think it was roughly 120 Slaves, 2 Greyseer’s, Abom, 2 Cannons and 30 poison Gutter Runners.  The Gutter Runners made short work of my Furnace and the Cannons mostly did nill for either of us.  The game really ended when Brad got Plague off and literally took off about 60-70 models out of my army.  It was horrifying and there was nothing I could do about it.  Once the Abomination went down on the bottom of turn 3 I called it as I’d lost basically everything at that point and didn’t feel like dealing with the futility of the continued beating. 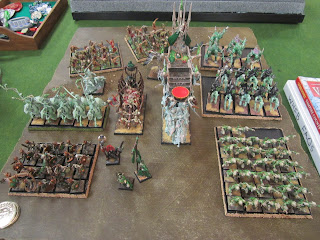 Excitement was high coming into this game as I got to play Dave from Garagehammer whom I consider a good friend, and since we’ve never played we were both pretty excited.  Although Dave did quite a bit of moaning about Skaven filth.  Dave ran what turned out (I don’t think it as intended this way) to be a nice points denial list.  Most of his points were wrapped up in the Coven Throne and his Black Knights/Hex-wraiths.  I held back in a corner to avoid combat with things that could easily kill me and sent the Abomination after the Crypt Horrors.  It took a couple turns but I did eventually magic missile the Hex-wraiths to death.  Dave and I were both groggy and tired with nasty head colds and Dave forgot to charge his Black Knights two turns in a row which I took advantage of to drop the Warpfire Thrower on them knocking them down to only 3 models left before eventually killing them off.  The Abom somehow over 5 turns never killed the Crypt Horrors (he totally should have) and I missed his coven throne with my Plague furnace charge by an inch.  Dave did a fantastic job all things considered of holding me to a small victory 11-9 in my favor. 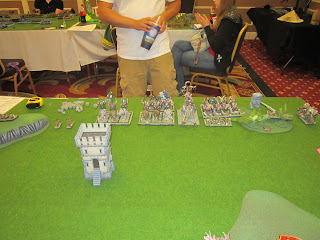 I knew at some point I’d face these too.  With 9 Ogres and 9 Dark Elves being the most numerous armies represented it was nearly a given.  Rick was running what is basically the standard list, 2 Mournefang, Ironblaster, Iron Guts, Slaughter, Butcher, BSB, and the big difference is he had a Thundertusk instead of 2nd Ironblaster.  He actually out-deployed me with his chaff of Saber’s and 10 man Gnoblar units.  This resulted in his heavy hitters being on my flank.  He managed to accidentally knock my Brass Orb engineer off the table on turn 1 through lucky panic checks from a rock that deviated off its intended target and really putting me on the back food as I’d planned on the Orb handling at least 1 unit of Mournfang.  Once he got to combat with me things just disappeared quickly.  I managed to Cracks Call the Thundertusk off and the Cannons did do a significant amount of damage.  Sadly I lost 16-4 which had my Stormvermin not failed 3 rally checks to run off the table probably would’ve been closer to a 12-8, but a loss regardless.

Overall:
So, my takeaway thoughts on the tournament.  First the tournament was a blast.  It was super fun, and that’s really what Grant, Chris and Steve are looking to do.  The hotel was very nice and the rooms spacious and clean.  The tournament was big enough it had to be in two conference rooms, but that also gave the tournament more space so that there was a comfortable amount of room between tables, no bumping into the other players.  It was definitely a great tournament.

My list while it had the teeth didn’t perform as well as I would’ve liked.  I think generally most of my games were screw ups on my part.  If I hadn’t let my Seer kill himself in game 2 I may have won or gotten a draw.  Against Brad I’m not sure what in the world to do, there are really no good options when ½ of your army literally disappears because of a single magic phase.  My loss in the last round to Ogres I definitely could have positioned better.  Even having been out-deployed I chose to move the Plague Monks forward and into the charge range of the Mournefang.  The worst part of the tournament is I have to learn to remember things.  I only threw the Brass Orb twice in the tournament as I kept forgetting it and I forgot to use the Stormbanner and Under Empire banner almost every game!  Especially against Brad the Stormbanner could have made a massive difference in keeping the furnace alive.  I can see places to change things but this was an important learning experience, but I’d also like to change some units about and experiment more as well, so while I came out of the tournament with a losing record I think it really boils down to inexperience with army.

I ended up coming 54th of 77 which means I didn’t even make the top 50% of players, but I won’t let that discourage me though and I plan on sticking with the Skaven through the year for tournaments.  I failed in my usual goal of more wins than losses, but that’s okay.  The tournament gave out a boatload of awards including a certificate for each Best in Race as well as the usual Overall, General, Appearance, Sports but they also had awards for Best Terrain piece and then the Hoodoo Voodoo award which was for the player encompassing the spirit of ‘fun’ for the weekend.  I’ll proudly say I won this award, and while it obviously wasn’t the most sought after award I’m quite happy with it and the accoutrements that came with my station. 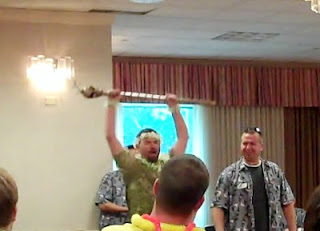 With all this done and said let’s get to the last bit of my post here.  Below you’ll find pictures of other armies and the hall that I took as well as videos and audio that I recorded during the tournament.  The first video is the best in race certificates while the 2nd is the actual awards ceremony.  Apologies about the audio quality.  I was as close as I could get and still have a table for the camera to sit on.  Finally the recording is just bits and pieces of interviews I got over the weekend from other players including a number of other podcasters out there, so I hope you enjoy the content. 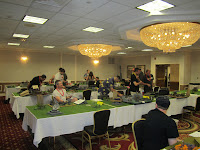 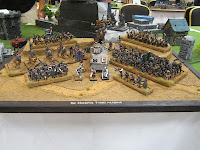 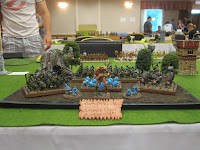 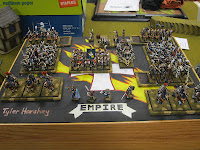 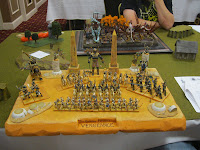 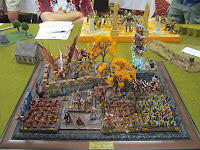 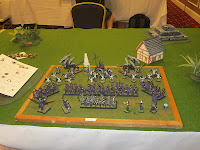 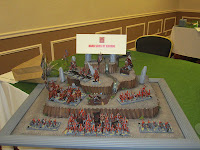 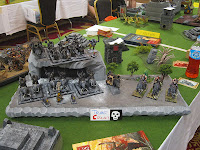 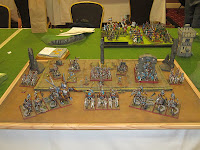 Audio:
Download Directly below:
Blood in The Sun 2012 Episode
Posted by Joe Flesch at 9:07 PM

Great coverage Joe, and congrats on Hoodoo Voodoo!! I know you weren't buying the hype for this one and wanted to see for yourself. Hopefully BiTS met your expectations and we'll see you again next year!

I'm not going to lie, my list was a terrible matchup for yours and was tougher, but damn you could have turned it on me with the Storm Banner! That's why I didn't have it in my list: so much shooting.

Yeah, I totally burned myself by not knowing/remembering some items in my list. Gotta learn, but it was the first big outting with the Skaven. I'll learn stuff like that eventually. It took me years to remember all my Dwarf stuff.