So I've nearly completed the Dwarf Brew House and I thought I'd throw some pictures of it.  It isn't finished being attached to its base yet and not everything is glued together, but you get the general idea from the photo.  I also have some other smaller finishing touches to add to it.

I don't know that it'll give me a shot at winning the BiTS terrain contest or not, but I have to say I'm satisfied with the outcome of it.  I ended up painting it in my Empire themed colors, so perhaps its an Empire Brew House, but what do you do. 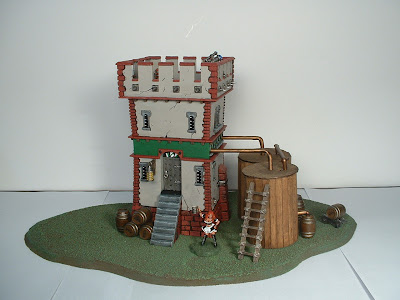 I think it looks great. Looking forward to getting to it and getting some drunk bloodletters.

Dude where did you get the barmaid figure from?

Uh, I won it in a BBowl tournament. I believe it's was made by Impact Miniatures but I'm not 100% on that.