As you have read, Joe and I got our 1000 pt game in last week, and I thought I would just throw up some thoughts on it and update you on my Mournfang. The games went pretty well, and my army did about as good as I expected. Here are a few things that I took away from these games.
First, fear is a complete game changer at low points. It seemed like every time I got into combat with Joe's Spear horde, he failed his fear test and I just slaughtered him.
Second, when artillary is on, it is very tough to get to it. I had 2 sabertusks, and the first game they got to the hellblaster and the cannon blew itself up. Very easy win for the first game for me. Game 2, his artillary could not miss, and it brought the pain. I ran every thing I could towards it, but to no avail. Engineers are key. 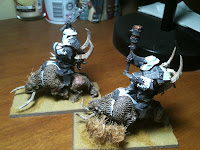 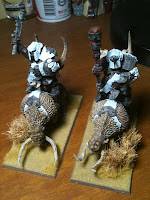 I also finished 2 of my Mourngfang for the up coming Blood in the Sun tourny. I like how they came out, but there is somthing about the models that just doesn't sit right with me. I don't know what it is, but as far as I can tell, it is the model and not my paint job that has me taking a 2nd look at them. However, with the way they play, i'll take them. I have used them in a couple of games now, and except for the one were Joe's hellblaster took them off, they have always gotyen their points worth. I think I will stop at 4 of them though. Multiple units of them are really good, but I can not see it being a very fun army to play. Anyway, here are the 2 that are finished.

Where is the Blood in the Sun tourny?