So tonight Ryan and I finally got around to our 500 point game for the month.  Excitement mounted as I figured I would lose horridly to the Ogres but I was very happy to be playing with the new army.

I don't know if he had any special items on his Bruiser, but at 500 points not much if any.  I'm also pretty sure he had Ironfists.

We had an udder picture fail this game.  I was so excited to be playing that I didn't think of taking pictures until we were in Turn 5 and even then there was nothing to take a picture of!  So you only get two pics this battle.  Hopefully we'll remember earlier next time.

Turn 1was mine and I fired the cannon to no avail while Ryan moved heavily forward.  Turn 2 I again fired killing 2 Ogres while the Handgunner managed only a wound.  Ryan used his 2 to charge some Ogres and his Sabretusk at my Handgunners.  Due to order I stood and fired at the Ogres and fled form the Sabretusk through my spears but out of harms way.  My turn I charged the left most Ogre unit (the one that just tried to charge my Handgunners) and much to my surprise he fled.  The Handgunners then failed to rally and hauled off the board.  I chose not to redirect but instead let his Bruisers unit come to me.  I managed to successfully get off the 5+WS and Re-roll wounds prayers.  Ryan charged in and I won combat, I failed to catch him, but on my turn 4 I charged him while he was still fleeing and caught him.

The pictures below are turn 5 pictures. 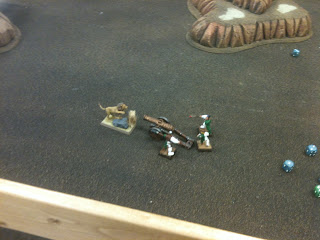 I tried to grapeshot the Sabretusk and only got a misfire.  He then easily dealt with my crew.  Especially after I failed a fear test. 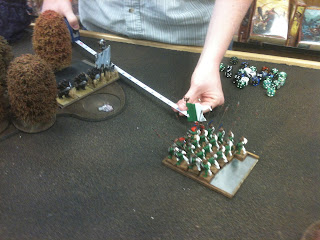 Again at this position I turned to face Ryan and let him charge me.  This time I did not get my Re-rolls but the Ward Save did save some guys.  This combat was totally Ryans and I was banking on Steadfast to see me through this last turn of the game which it did.  Based off of VP's I believe I won.  Actually in retrospect now I believe it was probably a draw but we would actually have to add up the points.  I feel confident in saying draw.  Still, it was fun playing.  I'm really excited to continue this Empire army and get some more games in.

Takeaway: Warrior Priests are necessary.  The hatred and prayers are the only reason I won that first combat.  I have a feeling with the type of list I'll be running there the only reason I'll win any combat.   BS3 sucks but it's what I've got.  Cannon's while awfully whimsical are still good.  It only killed two Ogres but the damage output possible means on average it will do more.  I'll just have to field two for redundancy.
Posted by Joe Flesch at 8:36 PM