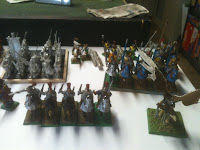 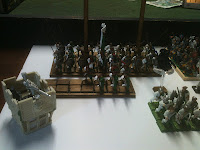 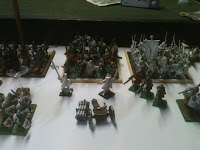 So for those who have listened to the show in the past you'll have occasionally heard me discuss an Empire army that I had been working on.  It is what one might call a "side project" of sorts.  A buddy of mine had an Empire army he had acquired years ago.  Parts of it were eBay piecemeal and some of it was his paintjobs, but the point is they were all pretty bad looking.  You can see in the pictures above what I'll be working with.  Well, most of what I'll be working with.  The two pictures on the right are purely the original paint and basing jobs.  If you look on the left most picture you'll see the Spearman unit and some of the Handgunners that I've already began refinishing.

Now that my Skaven army is finally complete I have the ability to finally focus on this project and get it to a completed point.  That and I don't have the kind of money to fund a different army that I'd have to start purchasing from scratch.  Due to the age of the army it will be nearly impossible to add to it as the newer Empire models don't match the 5th edition ones.  They were smaller in stature and had puffy sleeves and pants.  Luckily most of the models int he army were metal.  The only real plastic models were the horses, spears and handguns.  Due to the old plastic (and its near impossibility to strip without destroying the models) I chose to go with the original theme of the army which was the Stirland River Patrol.  I have no plans of making this army nearly the quality of paintjobs of my Skaven or Dwarfs.  Particularly since I'm basically preserving the old scheme on the plastics, but also because thats going to be 54 models I don't have to paint.

What I've done to the Spears and am doing to the Handgunners is touching up the Green/White, recoloring the brown and skin and then washing the models in Devlan, Badab, Thraka to give some depth to otherwise overly bland models.  I'm going to have to strip a lot of the metals.  Flagellants, Knights, Pistoliers, Gryphon, etc...  The Greatswords were bare to start with (small favor) and I stripped the cannons a long time ago.  I'm actually pretty excited to get this project moving and on all four wheels just so I have something new to play around with.  In that effort Ryan G. who participated in the Tale of Four Gamers set of articles we did a while back will be doing some work with me this time as well, although on a much less strenuous schedule.

We'll be playing at least 1 game a month at a 500 point escalation starting in May.  His goal is to have at least 1 unit or character painted per month to show off and continue his progress on his Ogre army.  My goal is to try and get the initial 500 points painted as well as whatever I need each month to escalate the list upward in points.  Hopefully this will result in my Empire army being ready before October.  While there is no tournament deadline for me to attend to I would just like to have it completed by then for self worth.  So if your interested keep an eye on the blog as I'll be posting updates along the way.