So now that Adepticon is done and over with its time to put together all the coverage I managed to get hold of while I was there.  I've got some pictures (not many) which I'll have jammed throughout this post.  I'll have some video of some awards ceremonies at the end of the post and at the very bottom for those who want to download it I'll have the recordings that I managed to get while I was there.  As the show was shut down I wasn't nearly as diligent about getting content as I was last year, but as an excuse I was also 3 sheets to the wind most of the time I was there as well.  Still, here's what I have and I hope you all enjoy the read/watch/listen of it.

Thursday Night:
I arrived late Thursday night hoping against hope that I might manage to snag one of the 500 free Battlefoam bags.  Alas apparently 9pm was too late of an arrival time for this to happen.  I did however meet up with Andy, Jake and Mark from Ohiohammer and go out for Sushi.  We then went back to the room where we proceeded to drink and basically just while the hours away talking hobby, podcasting, and everything under the sun until around 1:30am.  I think we recorded a little bit too.  As I haven't edited the recordings at the time of typing this I guess we'll all find out later when we get to that point.

Friday:
On Friday I participated in both of the Fantasy 1,000 point 'It's How You Use It' events.  There is a morning and evening event for which you must play different armies.  You also don't have to play both but as I was going to be playing Blood Bowl on Saturday and Sunday I thought I ought to so that I could say I played a ton of Fantasy, which I did.

Morning Event:
For the morning event I played with my Dwarfs.  I'll go over a quick rundown of the list and then hit up some small battle reports. 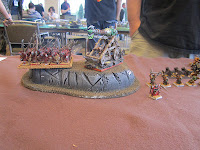 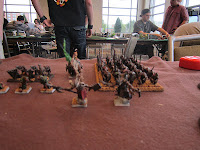 Game went well, I feel I outplayed him. The Dwarf list I had was a 1 trick pony that scouts a 40 man Warrior unit in your face. Then when you think, "well at least I'll get one round of shooting" I pull the Master Rune of Challenge on you. The Skaven were not prepared for it, and with a big deep unit containing his Lord he couldn't flee so he charged. This kept his shooting off of me.  After the Stormvermin with Lord crumbled I overran into his Plague Censer Bearers, WLC, Jezzails. My 2 Bolt Throwers and Organ Gun smashed his Slave unit with BSB apart and he conceded at the bottom of 3. Win.

Round 2:Warriors of Chaos 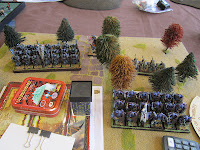 I felt I should have had this game. He set up really bad for going against my list. A unit of 18 Tzeench Warriors on far left, 18 Khorne in middle and his Sorcerer on a Disc far right. I stepped up to the Sorcerer as this was B&G (Kill him then I only need to knock off 1 unit to win). Challenge Rune went off he charged because odds were clearly against him staying on table if he fled. I sadly did not kill him, won combat he fled, stayed on table I did not catch. My turn 1 I charge him, he flee's, stays on table and I still do not catch. Had he died in combat I would've probably won as I'd have been able to reform. Instead on his turn 2 his Khorn made a 16" charge into my flank and the Sorcerer rallied. The Warriors proceeded to eat me and the game was over. Loss. 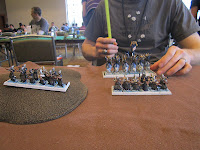 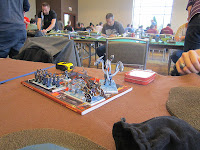 Another game that I felt I should have won. I started with his Sorcerer and RPX Crossbows fleeing from the Challenge. My shooting killed his army except the Hydra. I literally had everything going for me until turn 4 when with his remaining Sorcerer and 2 Crossbows who managed to double 1 stay on the board
threw 10 dice at Purple Sun and destroyed my General, BSB and about 19 of the 30 remaining warriors. The Hydra then got into me and murdered 6 of the remaining 11. I called it at this point. Loss.


Afternoon Event:
Again I'll go over the list and then some reports. 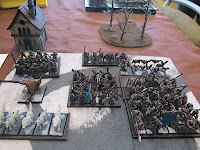 Tanya Scheibe drew me and while she's a great player I took a dirty filthy rat list with a Greyseer and an Abomination. She could not contend. The Abomination carried this game far and away and basically did all the dirty work. Damn thing is crazy. Win. 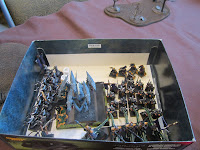 My opponent was plagued by some seriously bad die rolls. 10 Poison shots from my Gutters took out 4 of his 5 Cold One Knights. The Abomination scarfed all the Corsairs and Dark Elf Warriors and then him and the Hydra met. I won but with only a single wound remaining. The Doom Rocket blew up his Sorcerers with Crossbows and when they fled the Gutters shot them down. Win. 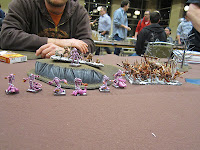 Its a fact that when Skaven fail, they fail hard. My dice that had been pretty hot abandoned me this game. Worst of all is I was on Table 3. I could literally see the winners circle. Doomrocket missed. Couldn't get a spell off to save my life and he had 2 units of Flamers which completely smoked the Abomination.
The Gutters took 3 rounds of shooting at a lone Herald of Tzeench and it always seems like Demon players never fail a ward save. I played it out but it was a lost cause when the Bloodletters got to me and KB'd all my characters. Loss.

Overall:
A great set of tournaments. I'm disappointed in the Dwarf list. I knew it was a match-up dependent win but I felt the 2nd game should've been mine and thus would have likely had a different 3rd round opponent. The Skaven just fell apart which thy are want to do so I can't really complain. I got to table 3 which was way higher than I expected to make it at an Adepticon event.

Saturday and Sunday:
I played in the Stuporbowl V (Blood Bowl) event.  I took the Dwarf Team again this year same as last, but with the tournament you get to pick Skill Packs so that you have some players who have different abilities to try and work a strategy of some kind.  Last year I took mostly Guard on them so that I would have a stout reliable team; which the Dwarfs start as anyway, but Guard makes it even harder.  Last year I lucked my way into the 'Most Casualties Inflicted' award and this year (planning on not winning overall as I'm not that great) I built the team to for that award specifically.  The team consisted of 6 Lineman (1 with Guard), 2 Blitzers, 2 Trollslayers (all with Mighty Blow), 1 Runner and a Star Player (Flint Churnblade) who has a Chainsaw to cut through armor. 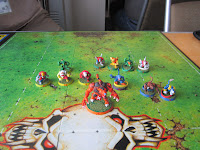 The Skaven are the fastest team without question in the game.  They start with players who can run 9, and when you add 'Go For It' they can often make 2 turn touchdowns, or 1 turn if they are a skilled player.  No matter how fast they score though, they cannot win a game when they are only able to put 5 men on the field and after inflicting so many casualties, I won 3-2. 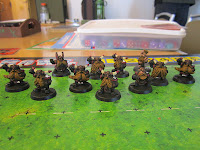 Another Dwarf team, but built for sturdiness, not casualties. A 1-1 draw seemed immanent until my dice went on fire and I took 5 Dwarfs out in string during the second half with all my Mighty Blow and the Chainsaw. Win 2-1. 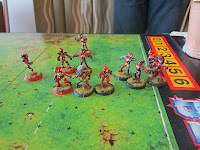 Top table for the day I played a Dark Elf. I managed only 2 casualties here. He is an extremely good player and quite frankly far better at the game then me. We both played our best and in the end I managed to hold him to a 1-1 draw.

Day 1 End:
The BBowl tournament has single day as well as 2 day awards. I didn't get anything on the Day 1 side. Someone else fought a Goblin team and inflicted casualties on most of their opponents guys netting them the Day 1 casualty award and pushing me to have to try hard for the day 2.

Sunday:
Round 1:Wood Elves
This is the friend of the guy I played in Round 3 on day 1. Again, a much better player than myself playing a team renowned as being the absolute best team int he game. He played better than me, no question. I managed to hold him to a 2-1 loss which I had to content myself with. 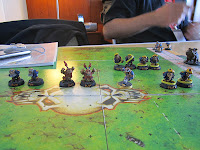 You'll see a theme here... This player was the same as the other I faced, having built for sturdiness, but also fielding a very good star player. Dwarfs is always a rough match-up because its the old 'Immovable object - Unstoppable force' issue. Dwarf armor is high and hard to break. I had to again content
myself with a 1-1 draw.

Round 3:Chaos Dwarfs
A shocking turn of events and one of the reasons I love Blood Bowl is that you can make things with Draws. I managed to make the top tables in the play offs which are the top tournament points leaders after 5 games. The Wood Elf and Dark Elf guys I both played earlier were playing for 1st and 2nd while I played Chaos Dwarfs for 3rd and 4th. See above about immovable and unstoppable. Yet another 1-1 draw was in the works here, I did however manage to kill his Minotaur with a chainsaw which was a moral victory for me.

Overall:
With a record of 2-1-3 W-L-D and the massive amount of casualties I inflicted (19 over the course of 6 games) giving me bonus tournament points I managed to get 3rd overall. Prizes awaited me and I got a great looking Beastmen team made of Rhino's, Elephants, Hippo's, Bison, etc... about a $70 team from an alternate manufacturer in Europe. I also won the Most Casulaties Inflicted award which was my goal and I'm super happy that I achieved it. Nothing makes you feel some self satisfaction like getting what you go for. The tournament was super fun and while I don't plan on doing it next year in favor of getting back into the Champs or the TT I may still do 1 of the two days. We'll have to wait and see.

Aftermath:
Having completed all my miniature gaming for the weekend I went to the D6G Board Game night which runs alongside the ACon Poker Tournament and After Con Mixer. I played board games from about 6pm - 2am. I won 2 board games in some contests they were having (probably about 80$ worth and had a blast. I then drove about halfway home before pulling into a rest stop to sleep for 3-4 hours and then driving the rest of the way. I then immediately went to bed and passed out. Acon was a blast. Thanks to all my opponents (who though probably aren't on this board) were great. I had a lot of fun and can't wait for next year.

Photo's:
Finally, here's some other photo's I took.  Frankly I'm disappointed I didn't take more, but the weekend just seemed to go by so fast and it seemed like I never had the time to.  Even when I had time it seemed like I was always running somewhere to get something; be that dinner, models, vendor halls, etc... 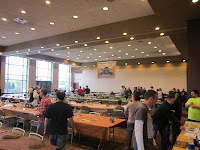 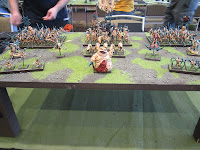 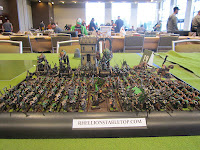 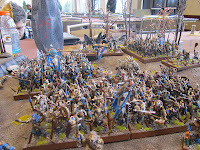 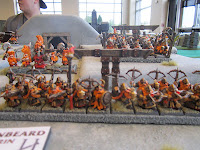 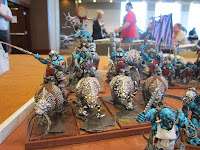 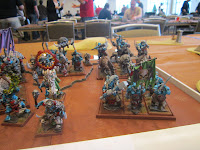 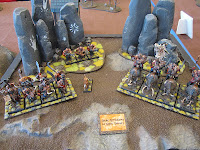 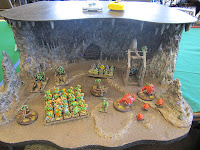 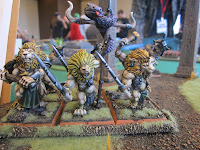 Audio Recording:
*Please note, that there is swearing in this recording so it may not be child friendly.  Also it ends rather abruptly.  Just a warning.
Length : 36 Minutes 17 Seconds
Listen Here:
or Download Directly below:
Adepticon 2012 Audio Recording Coverage
Posted by Joe Flesch at 8:22 PM