Blood in the Basement: Round 2, Turn 1

So we've run into another of the many grey areas provided in the book.  At least one rule we couldn't really find a hard and fast ruling for in the book to prevent issues from arising.  The guys noticed that there are a number of times in the book that you gain bonuses and negatives to specific units but due to the fact that the lists change constantly there really isn't a way for this to affect units in a perilous way.  Such as when you lose a game and get the ignominious Defeat where a unit from your army of your choice gains stupidity.  Well the next time you write a list to play with that army what’s to stop a person from simply building a list with 5 super cheap models like War hounds and giving them Stupidity to not adversely affect your primary units.  So we discussed setting our lists so that you can't do such things.  Then though we ran into the problems that there are also many things that change the lists such as if you gain the result from the Spoils of War table which lets you change your percentages of Special/Rare in your next game.

So, we've taken a vote on plans to fix these problems as well as altering a number of the rules.  In reality that’s all the campaign rules are; a set of guidelines to follow but alter to provide you and your group with a fun gaming experience.  So we've altered the rules.  We figured at the beginning of the Summer Season would be the best time to do so.  We've chosen to enact the following for our campaign.  We are setting lists for each character now.  So each of our 3 characters will have a set army accompanying them when they fight battles.  Also, all current bonuses of stats/traits and regiment of renown status will be lost.  The only things we'll be carrying over are Relics.  From here out the only way to alter your lists will be through the mines and Spoils of War tables.  Also at the beginning of each new season we may change our army lists so that we can try new units/combinations out.  We feel that this will keep the game more traceable and the players more accountable.  With that preamble out of the way let’s move on to our second season of the campaign, summer! 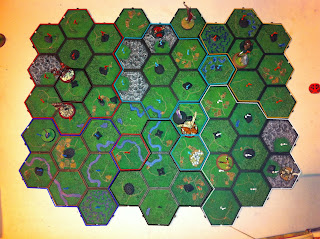 Consequently Dave and Ryan both retained control of the territories that they had already owned.

There was some small expansion of tiles in a couple of places which if you want to compare the map above with the one I'll be posting later you can probably pick out.

So at the beginning of the Summer Season the turn order is:
Ryan
Joe
Dave
Josh
Dan
Chip

So pretty good rolls this turn; nobody got hurt badly and nobody gained insanely good rolls.  Much better than the 1st turn of the campaign when players lost armies and others gained them.  This made the turn seem more overall balanced.  However it did alter the turn order so that Dan was now going first instead of 5th.

The armies were removed from the board and replaced in our own Empires per the rulebook and movement was then performed.  You can see the new positions of our armies on the map below. 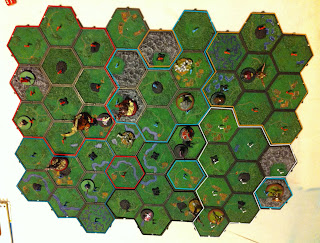 Dan not having placed his army onto another but having one of Chips armies in his Empire must challenge Chip.
Ryan then being on an army of Dave’s must challenge and fight Dave over the Wizards Tower.
This leaves Josh and me to get a random game in just for fun.

So an exciting turns ahead!  Especially since none of us actually lose armies during the summer which means even if battles are lost and armies scattered they come back and keep us fighting so unlike Round 1 where Dave and I ended up unable to initiate battles after Turn 2 it should be a full Round of fighting to be had.  Also you can look forward to seeing some new army lists and character builds soon on the site to look at.