So Adepticon 2013 has come and gone and with it many a fantastic game!  This will be the 1st of at least 3 different posts covering my time at the convention and the games I played and without too much filler lets get started.

I arrived on Thursday morning just in time to play in the AM 1,000 point 'How You Use It' tournament.  Feeling mostly lazy I played the same lists I did last year for the 1k's except switched which event they were in.  So for the AM I took a filthy Skaven list as below: 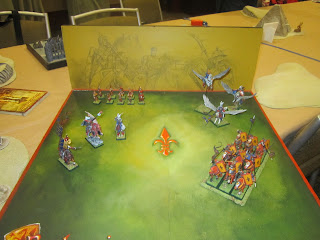 I knew going in that his Paladin very likely had Heroism but it didn't stop my from throwing the Hellpit at the Knight unit.  I figured out of 3 attacks he shouldn't be too likely to actually land the KB.  Turns out that he did though and even though I proceeded to put everything I had into that unit I left it with a single model.  The only casualty of the game thus being my Abom, the opponent won the game by 250 VP's.  A poor way to start. 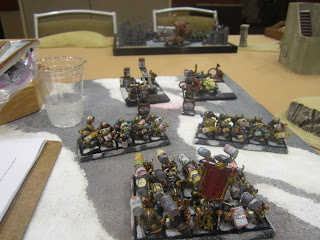 I really loved the look of this army.  The owner took the time to paint or print out labels for every Hammerer and turn all of their hammers into kegs of different beers.  The Thunderers are all shooting labeled bottles of beer and though it isn't in this picture his Championship display board was built atop a Keg-arator with a working Beer Tap in it.  Fantastic!  Unfortunately my army was almost tailor made to eat this style of army and though he did kill the Abomination with a Grudge Thrower hit, it proved his only solace as I then took him down to only a Runesmith left by the end of the game. 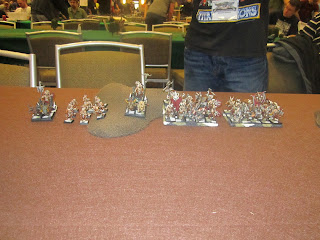 This was looking to be a fun game.  We moved tactically into position and prepared for a fight.  Then the Greyseer realized that his General and BSB were in 1 unit and used 'The Dreaded Thirteenth' spell to turn them all into Clanrats ending the game before the start of turn 3 due to the breaking point rule.  I was pretty drunk by this time and while I feel certain that had at least 1 combat in this game I just cannot remember it.

Had I not lost my 1st game I feel pretty confident that I would've won this tournament as I ended up 4th overall with only a 4 point separation between myself and 1st place.  Damn.  So close!!!!  Keep an eye on the blog in the near future to see my wrap up of the PM 1,000 point tournament as well as the Team Tournament.

Thanks for reading!
Posted by Joe Flesch at 7:41 PM