So you've already had the opportunity to read my previous post about the AM 1,000 Point tournament at Adepticon 2013, but if you haven't follow this link to do so: 1,000 Point AM.  This post is about the afternoon PM 1,000 Point 'How You Use It' tournament.  The list I took nearly matched the Dwarf list from last year as well which consisted of: 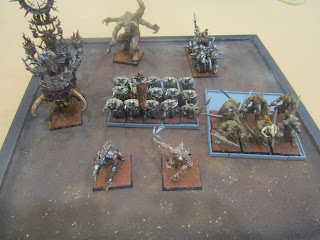 Last year my Dwarf list did okay.  This year would be completely different.  This army handled me briskly breaking my large unit and running it down in the 1st turn of the game.  The element of surprise did me no good against such strong opponents as the new Warriors of Chaos.

Scneario 2: Face to Face
Battleline
Special Rules: Box
18" square centered on the table which is worth bonus points if you have your general and BSB inside of it at the games end.
Enemy: Vampire Counts
Vampire - Level 1, Heavy Armor
Necromancer - Level 1, Master of Dead
20 Skeletons
3x5 Dire Wolves
10 Hexwraiths
Terrorgheist 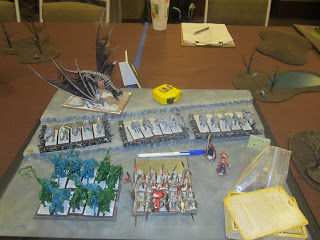 I scouted my unit and was in an okay position, until the Hexwraiths got to me.  I reformed deep and eventually did manage to kill them through combat resolution after about 3 full turns.  This is the point at which my memory disappears.  I'll talk more about that at the end. 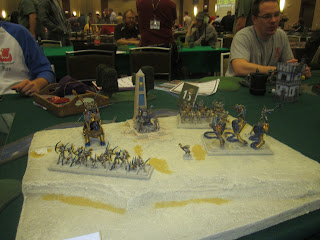 Here is the utter fail on my part.  I'd really like to say I remember this game.  Any of it.  However, I don't.  I was actually too drunk at this point after having been drinking for a solid 10 hours.  I talked my opponent into taking a picture of the army apparently as you can see me across the table from him.

As for the discussion of me being drunk.  I believe I must have won a game at some point in the PM as I scored higher in the tournament totals than my round 3 opponent.  I have no idea if it was game 2 or 3 that I won, and having lost my 1st game I can only assume.  If the player is reading this blog than I must apologize for my behavior.  This is definitely something to be ashamed of in my opinion.

Overall the evening tournament represented some serious hobby fail due to my drunken foolishness which probably helped me lose.  However, apparently I'm a great person to talk to while drunk because I tied for Best Sportsmen in this tournament and lost on the tie-breaker rules.  Damn, so close again...

Look for the Team Tournament wrap up coming soon!
Posted by Joe Flesch at 3:09 PM

I am pretty certain you lost to Jordan

Which one was Jordan?