So I've already wrapped up all of the tournaments I played in over the weekend.  If you haven't read any of those posts you can catch up on them all here.

Just wanted to wrap up and discuss the rest of my weekend.  While I've always volunteered to help clean up at the end of the convention for the last four years, this was the first year I was actually on Staff during the convention.  I was helping during both days of the Fantasy Championships and found it quite fulfilling.  I think that not only was it a nice way to finish the weekend out; but judging was far less exhausting than playing all day for two days is.  It was also a much more convenient way to socialize during the weekend as I was free to walk all over the Fantasy hall and talk to people.

I must admit that even though I'm used to running/judging smaller events I was rather worried about making rules calls in such a large tournament.  I didn't want to get a call wrong and end somebodies game; but I feel that every call I did make over the weekend was both justified and correct.  The few that I didn't feel 100% on were backed up by my fellow judges so that made me happy as well.

During the weekend the other tournament scores that I did participate in were posted so I'll drop a picture of those here.

How You Use It: AM 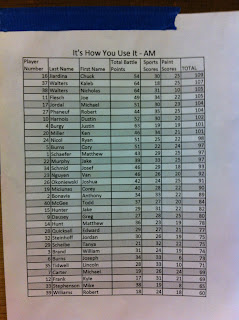 This is a great picture right here as it shows something that is pretty awesome for Chuck and I.  Not only did Chuck win Best Overall in the AM event; but I made 4th out of 32 players and with only a 4 point seperation.  Talk about close!  If I had won my first game of the day instead of losing I would have gotten Best Overall.  I was so close its ludicrous!

How You Use It: PM 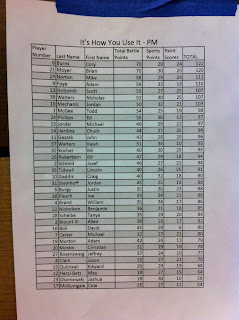 Chuck and I both did markedly worse in the PM tournament.  I placed 21st out of 35.  I did however manage to get into a 3 way tie for Best Sportsman only to lose it on the tie breaker of Battle Points.  Again I was so close to winning an award!  Dammit...  Considering I lost 2 of my 3 games and was pretty much black out drunk, I'll take the Best Sportsman tie to mean that I'm a really friendly drunk and fun to hang out with.  Lord knows everyone I ran into the day after the 1k events asked me how I was feeling so I must've been pretty chatty that evening. 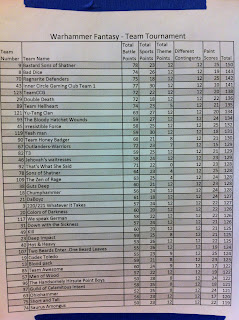 Finally we get to the Team Tournament.  Considering Ryan and I chose to run a pure combat list with no magic defense at all I think we did really well.  Out of 111 teams we came in 19th place and undefeated which I completely take as a victory.  Considering my last entry into the Adepticon TT was in 2010 with Chuck and we placed 46 out of 74 this years participating was a definite improvement.

So my final takeaway from Adepticon 2013?  It was a blast!  I enjoyed the heck out of it and really had a lot of fun both as a player and a judge.  I picked up and sold a bunch of stuff from the bits trades and really can't wait until next year.  My current plan for 2014 is to participate in the Championships since I haven't done so in 5 years now; but I will be hard pressed I think to not try the TT agian.  Only time will tell!  As an aside to my New Years Resolution post I completed one of my goals.  To hit a top 20 in a large scale tournament.  I don't necessarily count the 1k events but the TT totally falls into full scale GT so counts 100%.  Woo hoo!

Thanks for joining me as I recap my 2013 experience.  For those who've never gone, I highly recommend it.  It is a lot of fun.
Posted by Joe Flesch at 8:11 PM

I would of been happy with runner up if you would of got best overall joe. great job in the tournaments next year we need to strive for the top 2 spots in both tournaments.