So here I am to wrap up the final tournament that I participated in 'on purpose'.  My friend Ryan and I got together and built a list with Ryan's Ogre Kingdoms and my own Bretonnia force.  The list was as below. 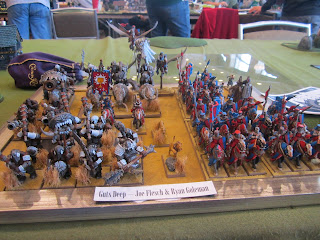 We were pretty excited to be in this tournament, even with the raging hangover I had the morning of the tournament.  We went into it heads high and optimistic even though we ran with absolutely no magic.  Our team name was 'Guts Deep' which pretty much told you exactly how we were going to play it.  Push it forward!


Scenario 1: Territories
Battline
Special Rules: The Box
-An 18" square centered on the table is worth bonus points for core troops and generals ending the game inside of it. 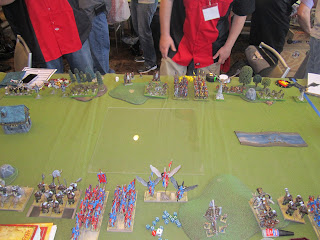 You can see the setup at the start of the game here.  Being a game with two Bretonnia players jockeying for position wast tricky.  We went first and moved into position just at the edge of our opponents charge ranges.  Our opponents moved gently taking positions to counter charge leaving us basically at a stalemate for charging.  Our turn 2 we decided to play our team name and went for some big charges.  Its hard to remember details this many days after the games, but I do remember there were 2 or 3 pivotal double 1 leadership tests made.  Our opponents first when I got a lance into the front and side of one of theirs.  Then he got into the flank of me and I made one to hold so that Ryan could get in to help me.  I'm pretty sure that there was yet another at some point; but in the end Ryan and I pulled the game out after managing to kill most of our opponents army.  It was a solid and fun game.

Scenario 2: The Trees
Battleline
Special Rules: The Forest
-A forest is placed int he center of the table.  On turn 3 it has the chance of moving in a random direction D6+3 inches.  The forest provides bonus points for units in it at the end of the game, but also at the end of each turn any unit in it will take D3+1 wounds with no armor saves. 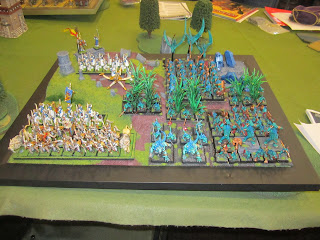 We were pretty worried when we came up to the list in game two.  Slamanders can get lucky and peal through armor and a huge block of White Lions hast he opportunity to really burn through anything it wants.  We moved fairly slowly into position this game trying to find ways to possibly whittle down our opponents scary stuff before combat, but we finally ended up just charging in head long.  His Skink Cohort broke a lance and chased it to my back board edge while Ryan got a lucky charge off into the flank of the White Lions.  He won combat but the Lions reformed.  I had a lance with my characters into the Saurus where I managed to HKB the Scar Vet.  Ryan then got lucky again holding through the enemy turn to again get another unit into the White Lion flank again finally finishing them off.  He then joined my fight against the Saurus helping me break them.  The Pegasus Knights killed the Bolt Thrower and a unit of Archers and finally with the Cohort so far away and only a unit of archers left we surrounded and finished off the High Elf contingent.  Another win for us.

Scenario 3: A Farewell to Kings
Battleline
Special Rules: None 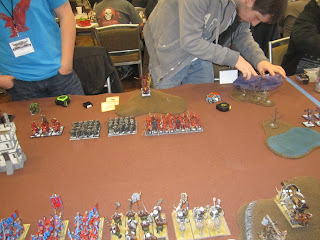 Ah, finally we got to the matchup we knew we would be hitting eventually.  A Warriors/Demons combo.  We were rather fearful of the big Bloodletter block and trepedacious about the Nurgle blocks.  We actually held back as the Bloodletters came rumbling towards us in this game.  Ryan lost his Mournfang to them but they were forced to overrun to our very table edge at which point we used our higher movement to haul it across the board as far away from them as we could.  The Pegasus Knights had an amazingly lucky turn charging the Skullcrushers in the rear and winning and running them down in combat.  The Nurgle player gave a unit of his regeneration but in the process sucked himself into the warp.  I promptly put my flaming unit and BSB into the Nurgle unit and though we both did woefully pitiful in combat I eventually broke and ran.  Ryan took care of the other Nurgle block as well as the Screamers while the Bloodletters never again saw combat again in the game.  Sadly on the bottom of turn 6 I failed a rally check on a 9 forcing us to a draw at the end of the game.  Truly unfortunate!

This was an awesome tournament!  Not only did Ryan and I take a list with absolutely no magic defense or offense, but we managed to go undefeated!  We managed to place 19th, so top 20 out of 113 Teams.  If I had passed that final rally check we would have vaulted all the way up to 7th Overall.  I was gutted that we didn't win all 3 games, but super proud that we went undefeated and managed to place top 20 out of everyone who had shown up.  We both had a super time this year and while my plan for next year is to participate in the Championships which I've been absent from for 4 years I'm super happy that we did the TT this year.

Look forward to some more Adepticon Wrap-up blogging in the near future and if you haven't read my other two wrap-up posts check them out here:

Glad you had as much fun as we did Joe!,