First to all those around the globe who follow the blog, Happy New Year!  I hope that your 2011 was as wonderful as my own and wish you great prosperity and fun gaming in 2012!

If you want my look back at 2011 you can see a previous blog entry here: 2011 Rear End Review.  However as many do I thought I might throw a few resolutions for 2012 in just for good measure!
There you go.  Gaming resolutions.  5 of them I thought should be plenty, and I think they are all reasonable goals as well.  What are your resolutions?


Now for the Battle Report!
Ryan G. and his Ogres VS. my Skaven at 1,500 points.  Meeting Engagement! 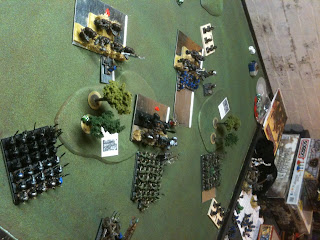 Honestly, we forgot to start taking pictures before turn 2 so this is actually the bottom of turn two.  Meeting Engagement is bad for me as it is basically guaranteeing Ryan his turn 2 charges.  I tried to hide behind some woods and throw Slaves and Giant Rats into him to slow him up but to nearly no avail.  The Slaves which you can see as mostly an empty tray towards the middle disappeared quickly due more to my own insanity.  I fired a Warpfire Thrower through them in hopes of hitting more of Ryan than myself but failing that by only rolling a 2 on the Artillery Dice and roasted about 12 of my own guys.  Oops... 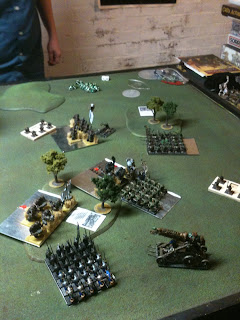 Around turn 3 the Slaves had imploded as the Clanrats come around the forest to go to where the Slaves have recently vacated some space.  The Stormvermin in the bottom of the picture now certainly bound for combat roll up to the forests edge in what hopefully wont be a completely lost combat.  The Plague Monks in the middle are holding; mostly due to Ryan's terrible dice rolling than any luck of mine. 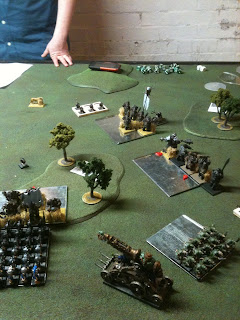 Ah, and then it all falls apart.  The Stormvermin engage while the Plague Monks broke.  The Bruisers unit combat reforms at the end of my previous turn so that on Ryans he can charge that Clanrat unit above in the flank.  I flee keeping him off of me for another round.  It should be noted I've not had a General for 3 turns now, his Brass Orb didn't hit anything and he ended up fleeing before the Plague Monks as I'd taken him out early on to try and throw the Orb. 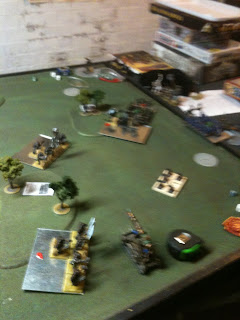 Blurry photo's right?  Yeah, you don't wanna see this anyway.  LOL!  The Plague Monks made it off the board as did the General.  The Stormvermin lost and ran off the Board leaving the poor WLC to die shortly thereafter.  His Bruisers unit makes it to the Clanrats wiping out somewhere around 10 of them in the 1st round.  They hold but to what avail?  The game is over...  Ogres are proving to be a very difficult army for me and the Skaven.  I know that this should improve once I get to the 2 and 2,500 point levels as I'll be adding some actual hitting power into the lists like the Abomination and the Plague Furnace which can with decent dice deal out significant damage.  A work in progress...  Its hard for me to get over my old Dwarf tactics of just go get 'em because that is something the Skaven do NOT seem capable of doing.


I really want to keep some Weapons Teams in the list, but I have yet to have one perform enough to come anywhere near justifying its nearly 100 point cost.  I feel they may be left out in the end, destined for fun games and not those at a tournament.  I also believe my 2nd WLC will soon be entering the fray.  Redundancy is the key.  The 1 never seems to do much before exploding, perhaps 2 will.  2,000 will see the addition of the Greyseer for certain and probably the Abomination to give my opponents something serious on the table to worry about.  I have got to get my head wrapped around this army before Adepticon and I do okay against infantry lists, but Ogres just seem too danged hard to wound while there mass number of attacks back seem to relegate my larger numbers to nearly pointless.  Frustration...
Posted by Joe Flesch at 2:50 PM

Your fear tests did not help you at all either.