We got together just 3 days back and ran our wrap up of turn 2 and moved on to turn 3.  As a recap of where we ended before fighting battles on turn 2 you can see the map below. 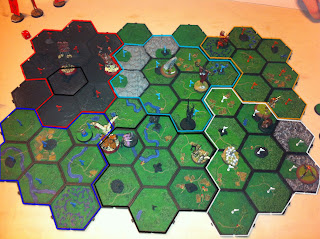 Book keeping is getting rather difficult at this point.  The pain that comes with campaigns I suppose.  However we forged ahead!  The battles concluded as such.

Chip defeated Ryan.
Chip earned Bolstered Ranks giving him D6x50 next time the army fights.
Ryan's army was scattered and earned itself some Inexperienced Leaders giving a unit in his army Stupidity next time it fights.

Dave defeated Josh.
Dave lives in infamy giving Josh hatred against him next time they fight.
Josh's army was scattered and he gained Vengeance will be Ours! giving him hatred in his next fight against Dave!

Dan and I did not get a chance to squeeze in a game.  We both work a lot; and have kids.

Events!
Ryan 31: The flying fortress moves.
Dave 44: In his next battle Dave can choose to deploy 1st or 2nd.
Joe 34: I can push an enemy army off of my land this turn.
Josh 65: +1 to fortification saves this turn.
Dan 31: The fotress moves.
Chip 55: Chalange any opponent regardless of position on map.

Declare War!
Dave and Josh are fighting again as are Ryan and Chip.  This leaves Dan and myself to try again to work out a game.  You think over a month it wouldn't be hard; but Dan's schedule changes a lot and kids make things hard.  We'll do our best this time.

So to give you a view after the movement of Turn 3 you can see the map below. 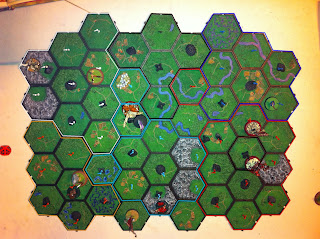 So you can see where things have moved about.  It should be a great turn.  Hopefully after this in Round 2 when all of the armies return Ryan, Dave and I can begin pushing back out of our own territories.  Poor luck on our parts losing 2 of our 3 armies and then not being able to expand in Round 1 really hurt us all.

I'm not entirely sure why that picture got turned upside down; but I'm too lazy to fix it at this point.