So we're really gearing up for the campaign I discussed in a previous post and I'm getting pretty excited about it.  I'd previously posted that I had intended on using the Warmaster models to represent my army markers.  That changed when I received a GW gift card for Christmas and with it and a little extra I'd been planning to use on the Warmaster models I was able to afford the Warhammer Fortified Manor terrain box.  Yup, so I totally cheesed out and my army markers are now extra Knight heads to represent each general.  Good stuff, right!?  Okay, so cop out; but whatever.

The point of me posting this is to throw up a little picture of the Might Empires tiles I've painted thus far to help keep me motivated on them. 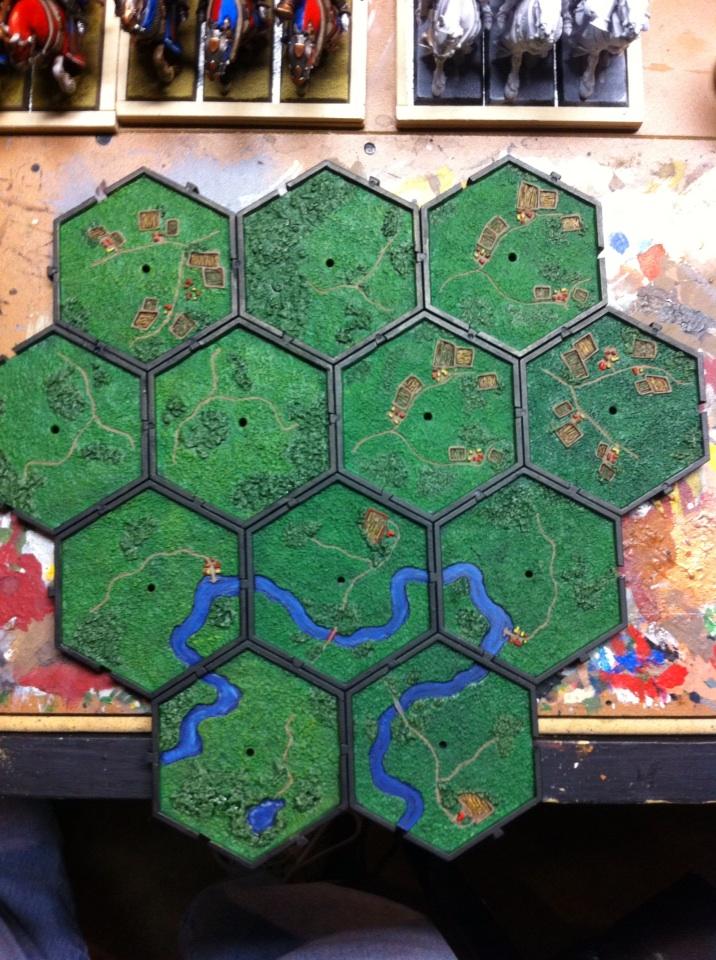 These are double sided and the underside of these are all painted as well, but I didn't take a picture of them.  I chose to do a very simple and basic color scheme on the tiles.  Yes we'll be using most of the rules from Blood in The Badlands, and I was seriously enticed to paint a cool looking map.  The problem with that is you then prevent yourself from being able to change the map much.  If you paint desert and winter and forest tiles then you know those tiles will always be together and for $60 I want more replay ability than that.

Also we've picked up a 6th player; our friend Chip so now the armies for the campaing roll up as so:
Bretonnia
Chaos Dwafs
Demons of Chaos
Dwarfs
Ogre Kingdoms
Warriors of Chaos

That means its can be a fair 3 on 3 type style campaign when we want it to be.  The real excitement comes from the 6th player giving us the ability to play the scenario's out of the book when we can/want.  I'm not sure it'll happen because we all work such insane schedules and have really nutty days off; but hopefully we can all do at least 1 big game together.

Well that's all I had to say.  Just a little update to keep myself moving.
Posted by Joe Flesch at 9:58 PM