Theres a new game in my town...

Well it finally happened.  GW has gone and broke us down with their... well, everything.  Interest in Fantasy was super high when the End Times started coming out and over the last couple books it has dropped as the power levels and storyline have continued.  Never have I heard so many Fantasy players discuss other game systems and switching out of GW to other companies games and while many of us tried to corral people into the GW Specialist lines that they no longer support it was only a matter of time before the bell rang and rang it has for my local friends and I.

Rang high noon at that.  After much discussion over the course of a couple months and some play testing of various game systems we have settled on picking up Wild West Exodus produced by Outlaw Miniatures which is a creation of the company Battlefoam.  It takes on an alternate version of history branching off just after the Civil War when a fantastic new technology is discovered which catapults the Wild West into a very Steampunk modern era of warfare.  Suddenly the pony express is riding hover bikes, driving buggies and flying in gyrocopters.  The old fashioned 6 shooter exists but it now fires explosive ammunition and rifles shoot lasers and plasma.  Cybernetic enhancements and body armor protect some from the worst of the weaponry but it truly is wild!

The game uses 35mm models which are quite detailed and very nice.  To my knowledge most of the starter boxes available from the company have been tooled in plastic but most of the single order models are still cast in resin.  The game uses a D10 dice system which means that your outcomes can vary quite wildly causing miniscule to no damage one second and the next putting your man on the ground with life threatening injuries.  Ideally the game started as a Skirmish style game with each side having a handful of models but the current structure has introduced large vehicles with sub-systems and damage allocation tables and the points values seem to be going up in the tournament scene making it a small army game.

My friends and I have decided for now as we do not know where WHFB will end up in the next couple of months to keep our initial investment small and simply stick with the starter boxes and 1 or 2 extra models; not investing in the heavy vehicles.  As the starter box contains 13 or so models this will force our hands into staying at low point’s games which will make learning the rules easier and keep the games more casual and fun.  The investment isn't terrible either; certainly not any worse than getting yourself into the GW hobby.  A starter box is roughly $55 and unlike GW Outlaw offers their mini rulebook for sale on its own and not only in a box set at just $20.  Then there is a special multi-template set that runs you $13 so for under $90 you’re in to playing.  Like I said we of course added a few extra models but nothing large or to our knowledge what would seem overpowered.

As for what we've chosen to play; well everybody has their own reasons behind that.  I ended up with the Outlaws, more because of the two player starter set that comes at reduced cost and extra models.  My friend Ryan wanted the Lawmen because he's a big fan of the movie Tombstone and Wyatt Earp was a must have for him.  Our friends Dave and Dan went with Warrior Nation and the Union respectively.  We're looking quite forward to some exciting shootouts and I'll definitely be posting some stuff to the blog in the future about the game and where it takes us down the rabbit hole as it’s so vastly different the Fantasy.

Until then I'll leave you with this picture of a building I'm making for the game.  As it turns out plenty of companies make Wild West themed terrain but I'm not quite as willing to pay for it as I was the WHFB terrain.  Most of it seems to be MDF laser cut wood at equivalent price to plastic tooled GW buildings.  Considering the old west was filled with rickety wooden structures I'm trying my hand at scratch building with balsa and basswoods.  Currently this is what I plan on being the back side of a shop front. 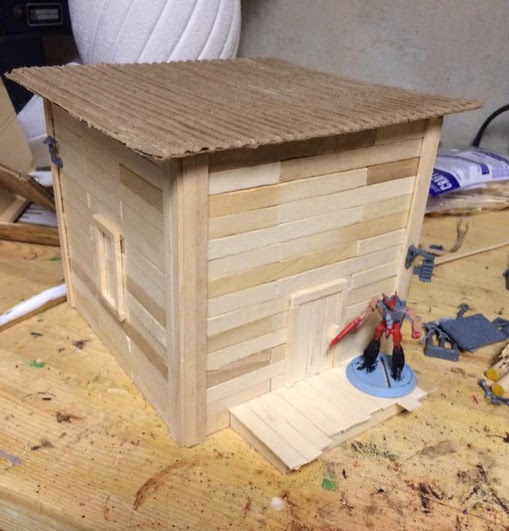