Triumph & Treachery!
We were so excited to get around to playing this finally.  I'm going to start by quickly going over the players and our lists and some other basic information before I get into the battle report proper.  The lists are not going to have all the equipment or exact numbers and everything listed as I don't have copies of everyone else’s lists, but you'll get the idea.

Bray Shaman with Lore of Death and Shard of the Heardstone

Scenario:
We played the 3rd of the 3 Scenario's in the Triumph & Treachery book.  This scenario divided the board into 6 equal 2'x2' sections with an objective marker in each section.  These markers provided the player with the closest unit to it at the end of the game with an additional 100 victory points each.  The game end condition was met by rolling a D3 at the beginning of every turn and then adding the number of players and the turn number.  If the total was a 12 the game would end thus with 4 players ensuring the game would go on for at least 4 full turns.

The Table:
We did not roll for special terrains or random setups.  We setup the table quickly and amicably so that we could move quickly as we knew the game may well take a long time to complete.  It contained: 2 hills, 2 forests, 2 pieces of impassable terrain and 2 buildings.

In this first picture you can see how the board ended up as we began. 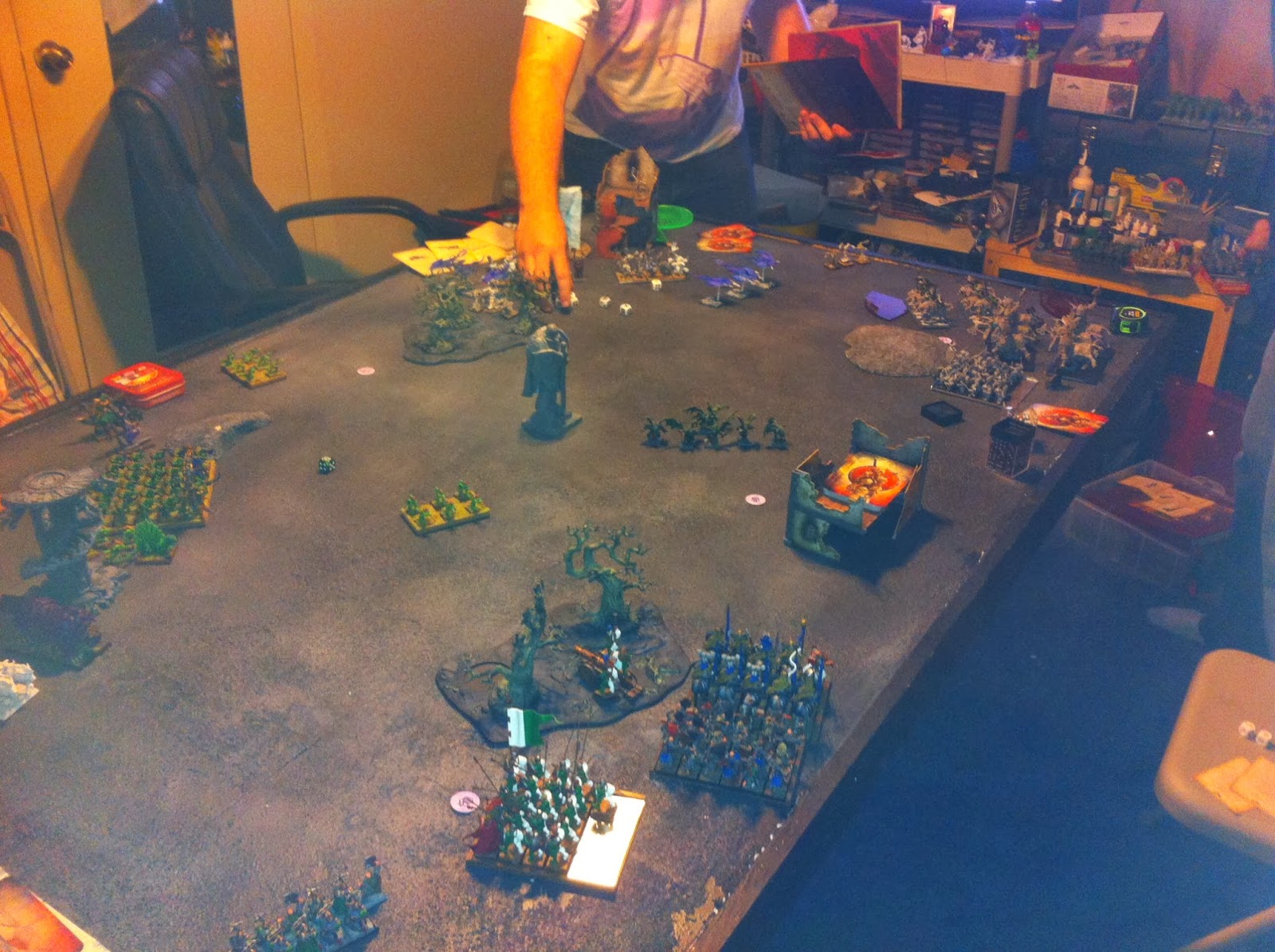 Dave who is in the middle of his movement phase went first and if I remember correctly only managed to kill Dan's lone Khan and 4 out of 5 of a unit of Wolf Riders.  I can't quite recall whether Dan or Ryan went next but I know I went after Ryan.  Ryan moved his Scar-vet, Noble, Saurus and Skinks towards Dave.  His Chariot and Bastilidon moved towards my spears as his Salamander and other Skink unit moved towards my Cannon.  He used the Solar Engine but didn't do much if anything; maybe killed 1 or 2 guys.  Dan raised a unit of 6 Skeletons with his Vampire and did nothing else of note.  Finally I went with great gusto.  The Dwarf Crossbows charge and kill Ryan’s Chariot and my Cannon manages to knock out the Bastilidon in one shot on turn 1.  Bummer for Ryan.  Also this put me into an early lead on the game.

I can't remember when I took this second picture; I believe it was either near end of Turn 2 or into early parts of Turn 3. 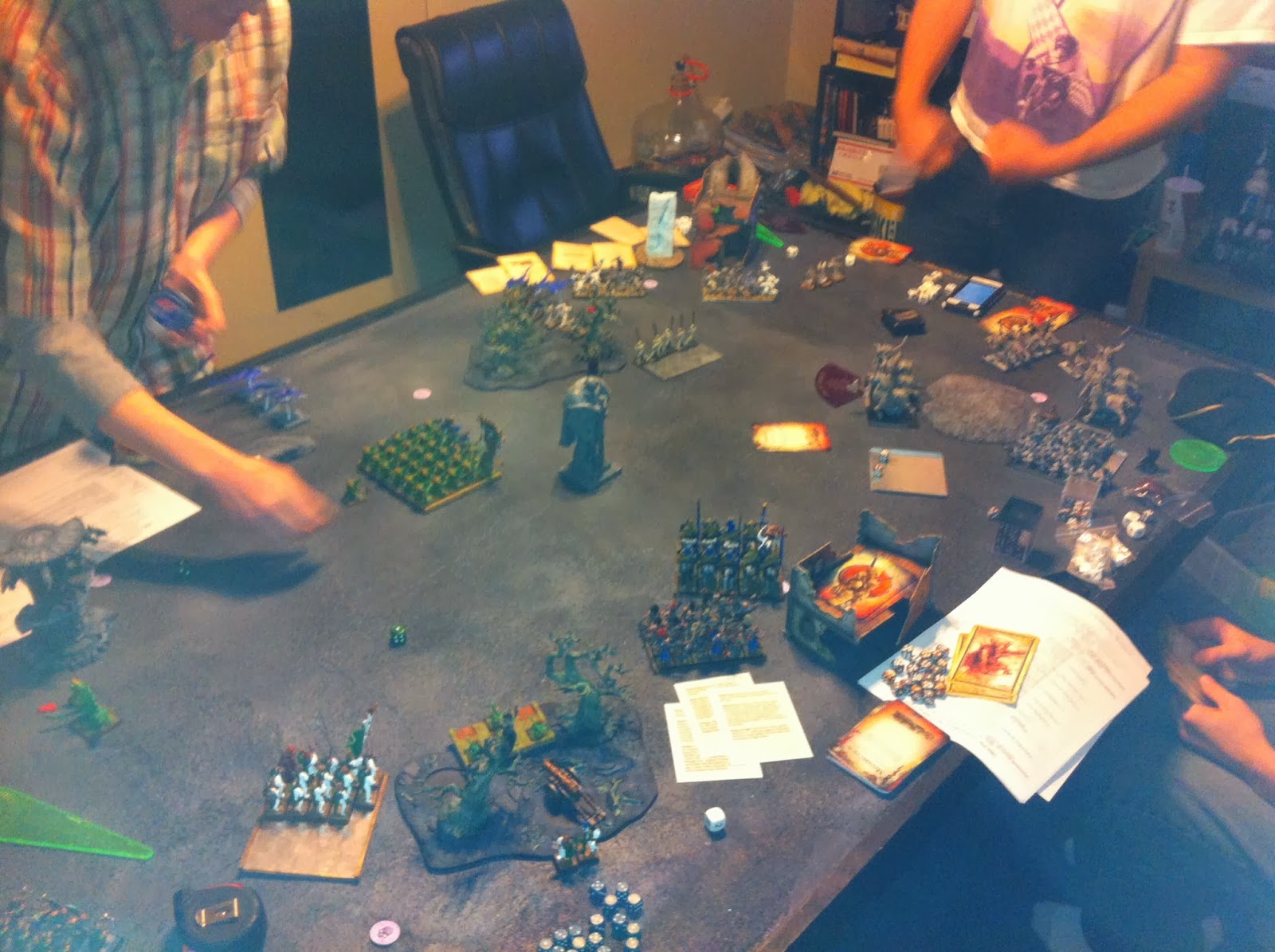 What you see are the results of the following.  I had charged Dave's Harpy's who fled.  I then began to bring my Spearmen around the forest so the mage could start tossing Magic Missiles about.  I had intended my Crossbows to kill the Salamander, but Ryan played a card that made them count as moving so I could not shoot.  Ryan's Scar-vet and Noble are on the opposite side of the far wood in the picture dealing with a unit of Dave's Screamers.  Dan continues to hold ground posturing, but he did charge Dave's Harpy's to force them to flee again and actually caught them running them down.  Something none of us expected for sure.  He also raised another unit of 10 skeletons represented by the empty metal movement tray with dice in it.  Hilariously this was cast irresistibly which then caused the Vampire to cease being a Wizard.

I'm fairly certain that the picture below is during Turn 4. 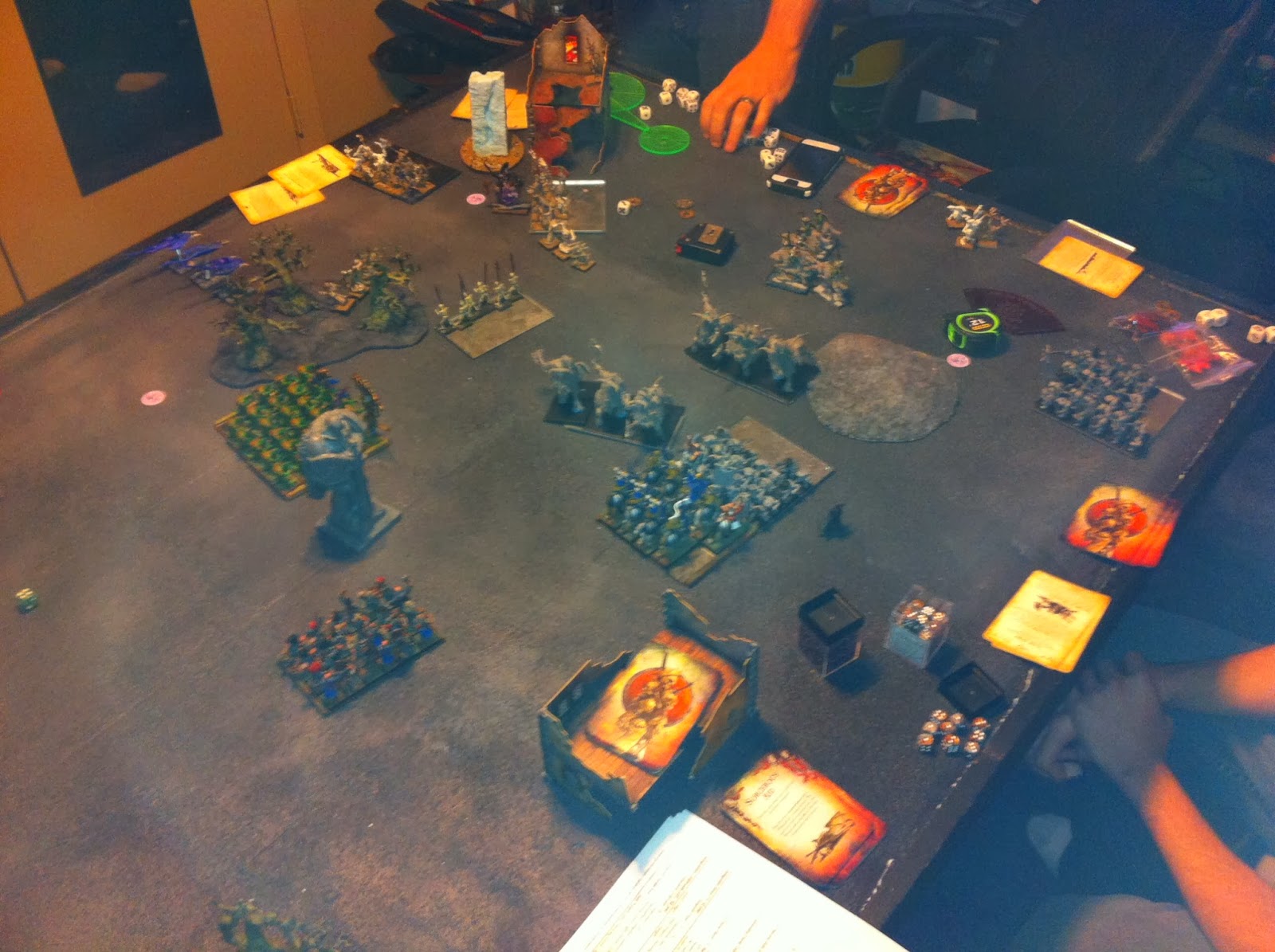 I moved my flagellants aggressively towards the flank of Ryan's Saruaus block to get help convince him to keep after Dave which he did by moving the block well behind the piece of impassable terrain.  I charged and destroyed Danes Skeletons and repositioned, but then Dan charged my with his Hobgoblins and Smith.  In retrospect I should've fled this charge as you'll see soon enough because what happened is I won combat because of some Treachery cards which caused Dan to lose Rank Bonus's and my 1+ AS meant I only lost a single Knight.  This allowed Dan to bring his Centaurs up to hit me around the next turn if I couldn't avoid it.  This turn also found the end of Ryan's Scar-vet as Dave cast Searing Doom on him unsuccessfully; but I played a card which made it irresistible (as well as forcing Dave to take a miscast) which killed the Scar-vet, but not Dave's caster.  Not pictured is Ryan’s Salamander torching 1/2 my unit of Spearmen, ugh!  Also Dave's Shaman attempted to cast Purple Sun on Ryan’s Saurus block.  He then proceeded to misfire the template which landed on himself and sucked him to a grisly death.  We had a great laugh at this.

This is where I really could've used a picture that I didn't take!  Actually I think there are two turns here between the last one and the next picture.  Oops... 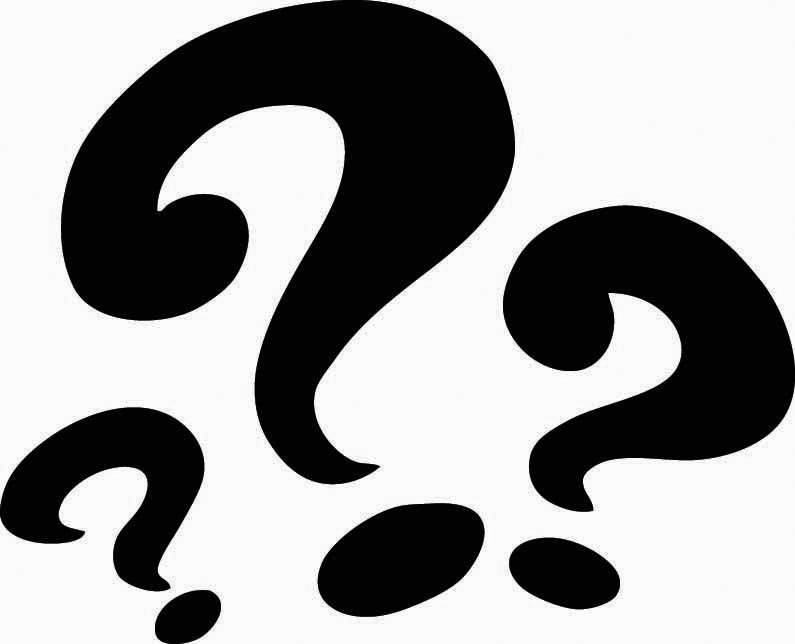 Dan brought his Vampire and Centaurs into my Knights breaking them.  I used a card to 1/2 the pursuit difference but he still caught me bringing him into the lead as he took out my most expensive unit as well as my General.  I finished off the Salamander; Ryan killed the Cannon and I got the Skinks.  I then came around to start throwing Magic at Dan's Centaurs.  Ryan’s Saurus block killed one unit of Dan's Centaur's as his Noble continued to slowly grind down Dave's Horrors.  At this point Dave began moving his units to secure objectives as we knew the game was nearing completion and each of the 6 objectives was worth 100 points each to the closest unit. 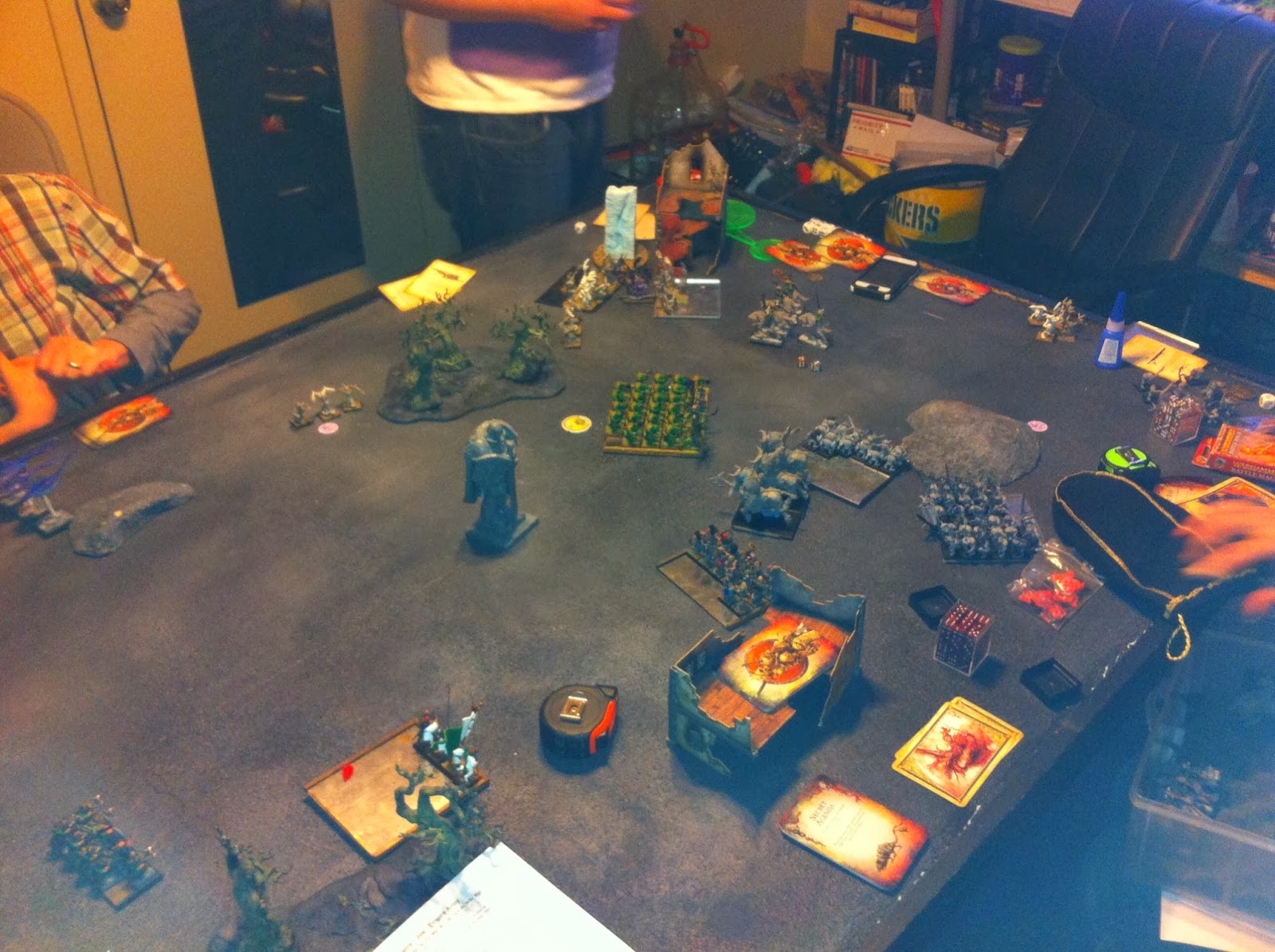 This picture was basically taken at the end of the game.  Bottom of turn 6 or 7 I believe.  My Flagellants went into the Hobgoblins, killed the Smith (also Dan's General and broke them.  I also cast Banishment and killed his Vampire, giving me the points for him, Danes General and the unit Banner.  This is the big point’s swing that will eventually give me the game.  Somewhere between last turn and this Dave charged 3 Flamers into Dan's Wolf riders and lost with Dan running him down.  One of Dave's units of Horrors miscast literally exploding themselves from the board.  My Light Wizard by the way died while miscasting his Banishment on the Vampire.

Conclusions:
In the end the game was a load of carnage.  It is somewhat difficult to wrap your head around having different opponents in different phases of the turn and sometimes it really is a tough choice between what to do.  I often found myself on the fence about shooting Ryan or Dave's units.  The deployment for this scenario could've easily seen us fighting combats from Turn 1 if we hadn't chosen to deploy in the corner 2x2 sections; if one of us had deployed in a middle section battle would've been joined quickly.  I found the inclusion of Mercenary (allies) to be a fun choice.  My Crossbowmen didn't do much, but Ryan’s Noble certainly bogged Dave down the whole game.  Dave's Shaman with Heardstone certainly gave him magic superiority when he wanted it and Dan's Vampire did some damage along the way too.  I can't remember all the cards that were played obviously throughout and very few of them seemed to make enormous differences in the game.  There are definitely some nasty ones that could really screw someone’s turn up if used at the right time; I just don't think that they happened to be in the appropriate people hands when they were needed.  We forced each other to choose new opponents many times throughout the game.

Our game of 4 players running 1,000 point armies with 200 point Mercenary contingents for a total of 1,200 points per player clocked in at just over 3 hours.  This is not including time spent to setup the table and terrain, but just from start to finish of the game itself.  Not too bad I think for 4 players.  We all concluded that we really enjoyed the game quite a bit and we definitely plan on playing it again sooner rather than later.  I still feel that the MSRP of the game is well overpriced which is unfortunate.  Had this been $55, hell even $65 I would probably buy it, but at MSRP $85 and after adding tax in the game at full price comes in at just over $90.  That's insane for a book no larger than an army book, some cards and cardstock tokens.  I'm sorry GW but no.  So my end thoughts.  Definitely worth playing, lots of fun, crazy games.  If you've got a group or a couple of friends to throw cash at it together so it isn't such a sting to the wallet then I recommend the purchase.  Thanks to Dan for taking the hit on this buy.  If you want to hear some actual discussion on the game, check out Episode #73 of the Waaagh Cast which will be coming out in early February.

Thanks for reading!
Posted by Joe Flesch at 10:00 PM