So here I am sitting in my basement constantly stalling on my O&G project because dammit, that much grey plastic makes me depressed.  Then Flat-Con came along and with it the possibility of being short on terrain which made me go and buy some green felt mats for the tables and re-invigorated my want to run my own small tournaments outside of our local FLGS's.  Like in my backyard small; tiny 10-20 player shin digs which could allow copious amounts of drinking along with the ability to grill out lunches/dinners.  I had begun collecting terrain boxes of stuff last fall but never really got around to building any of it but I suddenly felt quite excited to get back into it and so I have.  This post is going to discuss the terrain and the ideas for it all.


To begin with let's see what I have available to work with.  I've got the following:

That's a solid start to a really good collection of terrain and pieced out properly should be able to outfit quite a few tables.  Now the single Watchtower I've already assembled for Blood in the Sun in 2012 which is what became my Dwarf Brewery. That is a good looking piece of scenery right there.


Now I've already begun tearing in to the sprue's for the other things and let's take a look at what we've managed to begin cobbling together. 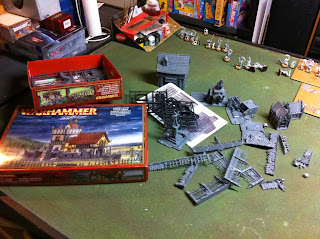 First up let's count this little bit in for nastalgia factor. 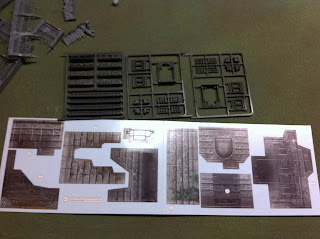 These are the ruins piece of scenery that came out with the 5th edition box set.  I know that cardstock/plastic combo buildings aren't nearly as nice as most of my stuff I'll be building but I've got a soft spot for these pieces because they make great pieces of impassable terrain and if you end up playing a skirmish game they give you a great feeling of mobility within the buildings themselves.

Next we've got some obvious parts obatined from the Fortified Manor set.

What I really love about the Chapel building is that you don't have to use the silly statue's that came with it which means I can potentially use those for future pieces.  Also it came with a clock.  I don't know why, but man I love clocks.

Then of course I've got the Fences/Walls set and the fence pieces from the Graden of Moor set which I didn't actually snap a picture of so we'll throw a stock photo in here.

The Garden of Moor set you can see at the top of this post.  While I think the regular set pictured here will be of great use the graveyard set bothers me as the fences included with it are 1/2 iron post and 1/2 brick.  I like uniformity in my things.  This is why my Bretonnia army quickly became a uniform color scheme and all the riders lost their personal heraldry from their helmets.

Speaking of the Garden set. 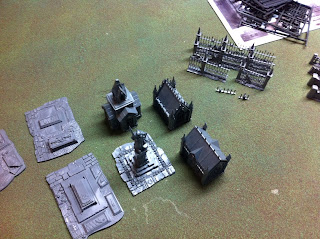 Look at all that lovely stuff.  3 Mausoleum type buildings, a statue, 3 grave yard tomb parts and then of course the iron post fences.  Now I have to say I'm not a huge fan of the tomb flats that the Mausoleum's sit on top of so they may not end up being used, but those 3 little buildings and statue are going to be of great use.  My plan currently is to attach 1 or 2 of them to a flat with the fences around most of it and use it as an occupiable building.  Pretty easily done as the fences will give it definitive edges and then you get your Haunted Mansion piece of scenery from it.

Next on the block is this little gem. 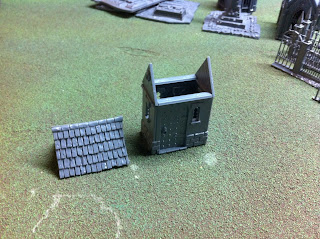 This is the secondary building for the Watchtower.  According to GW's instructions this actually goes on top of the Watchtower for who knows what reason.  I consider it an undiscovered gem.  It is essentially a small gatehouse which you can use along with some fences to block off an area.  Or perhaps if you build a movable barricade it could be a toll house on a road.  I see a ton of options for this little piece and since I have 2 Watchtowers I have 2 of these and that makes me happy.  I'm thinking one of them may get combined with the graveyard.  It could even be so simple as just to be a small outbuilding on its own like an outhouse or woodshed.

Then we have this which really made me kind of happy as well.

You can see from the first of the four pictures this is a small side roof maybe to put wood underneath during winter that attaches to the Chapel.  It came in the fortified manor kit but it comes with one for each side of the building.  I couldn't get them to fit onto the building correctly or I would have happily used them there but since I couldn't I picked up something else in my mind.  The roof to a small well house!  Great idea!  Digging through my bits I quickly ran across an old Empire Mortar which I cut down to make the well, a barrel from a Leadbelcher and an upside down Bretonnia helm with the visor scraped off is a water bucket.  I think once its painted up and mounted on a base this will make a great and simple addition to a small settlement.  Wyrding well!

Now we have of course there this little piece. 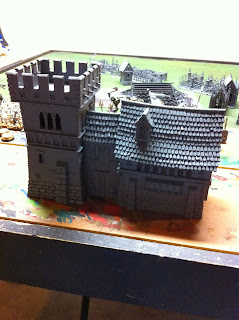 The chunk that sits between the Watchtower and Chapel that actually turns them into the Fortified Manor house.  It certainly would've been easier to assemble if I'd glued the connecting piece onto the buildings but I decided I wanted the most options out of it all so used some pieces of sprue inside as supports to assemble it on its own.  Now I can simply set the buildings next to eachother when I want to use them as one large piece.  I didn't picture the Manor House walls, but I do plan on assembling those as well and eventually I'll get a game in using it as such.  Quite excited.  I'll talk more about those walls in a later post, but I don't think I'll be able to use them for anything else sadly.

Then of course there is the fortress.

This isn't my fortress.  Lord no, that would mean I've actually painted it after its been happily assembled for almost 5 years!  No, mine is still grey plastic and I absolutely do plan on one day using the damned thing in a siege game.  A big one!  Once everything is assembled here I'll have the walls and towers with gatehouse, a chapel, 2 watchtowers, a graveyard, a number of smaller buildings and a couple of ruins.  I'll really be able to put a small town behind the castle walls for the enemy to come sack!  It'll be a grand old time; but let's not get ahead of ourselves.  I have a damned long way to go before that!

As I begin assembling some of the more permanent pieces such as graveyard or well house I'll make posts on them and perhaps some painting progress but of now this should give everyone some ideas of what I'm after.  Hopefully you have some terrain about that you'll get inspired to go back to after reading this.  Let us know!