So I haven't posted recently and with the Thanksgiving break coming up here in the USA I thought I'd slap together a quick blog post with my recent painting movements. You can of course go to my last post discussing terrain (located here: The Great Terrain Build) and see where this started but this post is to bring you up to where I'm at now.

It's been a busy while since that last post in my life so I haven't gotten nearly as much done as I've wanted but I've been happily setting up ideas and painting walls and fences at every opportunity.  So lets take a look at some of the layouts I've thought of doing.

Let's begin with my haunted house/graveyard piece of scenery that I want to put together.  One of the things about the Garden of Moor scenery kit I didn't like was that the iron fence and the stone fence looked awkward together so I've decide to separate them.  My initial idea is that I can split it into two similar graveyard style pieces and this is the first and easier of the designs.  You can see that their isn't quite enough fence to make that 4th side so I've added some spiky bits form a Chaos Space Marine Tank to make a smaller ground fence.  Event hen there was a small gap that didn't have a post on the end and here comes to the rescue one of the smaller huts that go on top of the GW Watchtower.  Now it looks like a nice little private family mausoleum.  Love it! 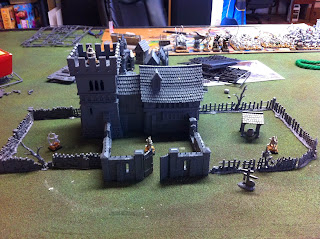 Then of course I had to set up the actual Fortified Manor just to see how it would look.  I plan on leaving all the regular Walls and Fences loose so that they can be rearranged every game they get used, but the walls that are only for the fortified manor will likely be glued together and only used when the entire set is used as a single piece.  It looks very impressive.  Also you can see that little well house I put in the yard.  It adds a nice little touch I think. 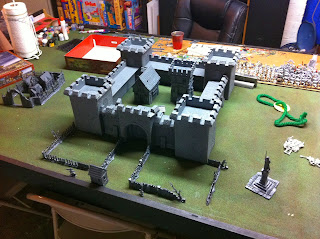 Then I just had to see how the fortress looked with the buildings inside of it.  It doesn't leave a lot of room int here to move stuff around, but I think would definitely add some crazy fun to a big game.  Maybe even not to use it in a full game of Warhammer but perhaps make a crazy scenario for a Skirmish or Regiments of Renown game.  A small task force assigned the task of sneaking into the castle and opening the gates from the small garrison left to defend it. 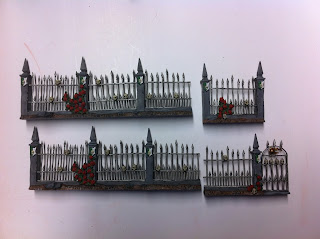 Then we have the fences themselves.  Sorry about the picture quality.  I just didn't want to drag the white-box out tonight so I just pictured them on a white board and clearly the lighting isn't great.  Particularly with my big shadow over them.  Oops...  Still you can see what I'm going after here.  I must admit that painting these has been a very pleasant distraction from working on a normal army of models.  For some reason painting static things is a welcome change of pace.  Perhaps because I'm not trying to layer skins or cloth and the colors are more muted.  I really like the way these are turning out.  I really like the graveyard fence because of the roses that grow all over it.  The skulls actually aren't as distracting as you might think either.  I'm really quite fond of the roses though.  It adds such a nice splash of color to the piece. 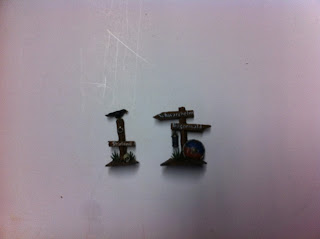 Finally another piece that I really like a lot came from the basic Walls and Fences set and its these two signposts.  They are so small and miniscule that I can't see them acting much as pieces of terrain; but they seem like they would be best either added to a piece of scenery like the woods or some such.  My plan however is to probably mount them 40mm round bases and use them as objective markers.  Perhaps put them down at the center point of the table for a control the center objective saying that they represent a heavy crossroads in the region.  you could even get wild and find some terrain to represent the roads.  I've seen this type of thing before, but not very often and I think would look really nice.

Anyway, that's all I really have for now.  I'm still excited to be working on the terrain, but I know that there is about to be a serious game related lull in my life due to the Thanksgiving holiday as well as Christmas coming up.  Work is going to get busy and family even more so.  My big thing keeping me going right now is the fact that Merry Mayhem is only 2 weeks away!  I cannot wait!