So here I stand on the brink of basing.  Having completed the modeling portion of my group I now have to figure out a basing scheme.  One of the things I wanted to do is make them really scenic and dynamic so that they add a lot to the models.  However, I have to remember that I will eventually incorporate these into a larger Orc & Goblin army later this year and I don’t want to make something so overly complicated that I can’t recreate it months from now or so complicated I don’t want to recreate it 150 more times before eventually finishing my army.

I’ve done a number of different basing schemes on my armies that I already own.  To help me think about I’ve charted what I’ve done and some pro’s/con’s of them.  I’ve also taking a picture of some models from each army below for examples. 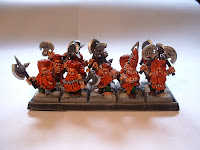 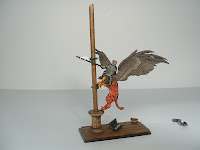 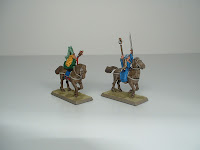 So looking through here there’s a couple I can easily toss out.  I really was disappointed in the powder flock on the Bretonnia army.  I’ve seen people use this flock before and make it look good; but I just didn’t like it so I will very likely not be using it ever again.  Also, the bases of my Skaven which I painted cobblestone to match the theme I wanted took a long time to paint all the lines for the stones and even though I think it took just as long as any other form of basing I actually often lose out on paint points for having bases without texture so I won’t be duplicating that.

That leaves me down to painted sand with statics and something overly unique like stained wood, etc…  I’ve seen some very nice bases done by many people that combine either of these techniques.  Honestly I’d like to try some Jim Wappel type basing with carved bases from Sculpy and cork (pictured below) but that’s a bit overmuch for me. 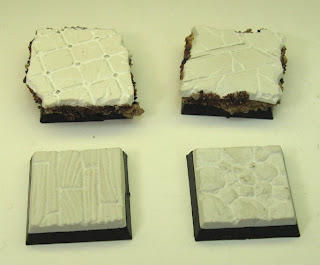 Not only does it take a lot of effort; but a fair amount of investment in extra stuff.  I generally don’t like the look of bare/painted cork either. 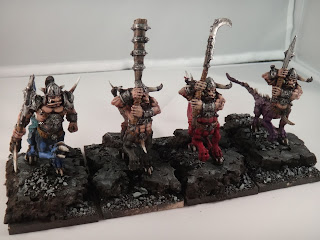 Still, I think that cork is probably the direction I’ll be going with this army.  My plans for this Regiment (and eventual army) is to take everything I’ve been learning and have learned over the last 4 armies I’ve done is to make an army that will maximize my painting score regardless of the tournament I take them to.  This means, plenty of conversion work, repositioning, highlighting/shading, blending, intricate and unique basing.  This will make the army my opus I suppose but I’m looking forward to doing it and this Regiment is really pumping me up for it.  Look forward to see the future of my plans.