Continuing my own coverage of the Rise of Legends project from Unstabledice Podcast.

So since the first post I’ve gathered my models and all but finalized my list for better or worse and am now getting more into the fluff of the army.  The list is: 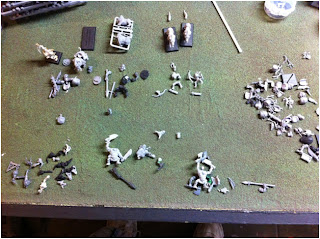 I’ve changed my list quite a bit since I last wrote.  I didn’t like the idea of the low Armor Save on the Black Orc so made a Boar Boy the leader because I could easily armor him up to a 2+.  Also I upgraded this guy to a Champion because I really, really wanted the extra attack.  I think 15 points is awfully expensive for that, but I still chose to go this route.  Then I wasn’t satisfied with 18” bows so I dropped a Wolf Rider and added an Arrer Boy for the range.

With that hammered out, I decided to start choosing names for the models.  I decided if you weren’t big and bad then you didn’t get two names because only the biggest and baddest Orcs can demand others call them by proper names.  All of my Orcs names in some way or another basically represent violence.  The only exception to this is Nabba who is going to be the Orc carrying the Pig.  He likes to nab things.  The Goblin who is too weak to earn a second name, was given a disdainful name more like a pet.

I debated on naming my Boars as well, but chose not to.  My plan currently is to write up a piece of background fluff for the unit basing it off of the old Dogs of War entries from their army book in 5th which usually listed a piece of background story, a list of named guys, special items/rules, etc… and then a company motto or battle cry.  As below: 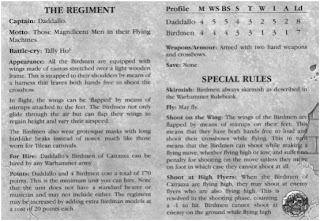 I’m getting rather excited about it all now and now that I’m starting the conversion and construction process I’m looking quite forward to getting these guys put together.  I’m still not certain of basing schemes to use.  I wanted to go super fancy on them; but since these guys will end up one day in part of a much larger army I’m not sure what to do.  I guess I can worry about it later.  That’s all for now, hopefully your all still interested in what we’re doing on these articles and definitely keep an eye on the Blog to see some progression.

In the future articles that I write I will include links at the bottom so you can go backwards to see previous posts on my Regiment in case you forget something or you jump into this whole shin dig late and have missed some posts.